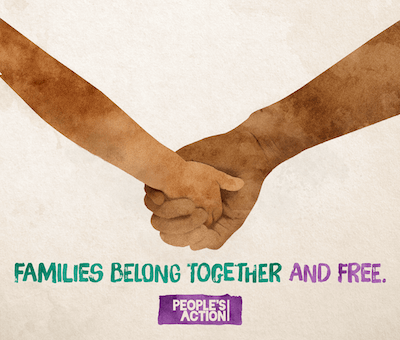 th leaders to U.S. authorities: Migrants have international right to U.S. asylum. NBC: "Over 200 religious leaders and advocates gathered at the U.S.-Mexico border on Human Rights Day to send a message to the Trump administration, arguing that migrants stalled in Mexico who have not been allowed to enter the U.S. have a right under international law to seek asylum. AFSC brought faith leaders from different religious denominations together for a press conference at the Border Field State Park in San Diego on Monday to call on the U.S. to respect people’s human right to migrate, end the militarization of border communities and end the detention and deportation of immigrants. Once the conference ended, the hundreds of people gathered at the park started a procession towards the San Diego-Tijuana border in solidarity with the thousands of migrants who are living in crowded tent cities and shelters after having traveled more than 2,000 miles towards the U.S.-Mexico border in a caravan that started in Central America. 'We can do better. Our sacred texts tell us to tear down walls, to welcome the immigrant and to treat everyone as if they are God's children,' said Rev. Dr. Liz Theoharis as she walked in the procession, holding a sign that read 'El Amor No Conoce Fronteras,' Spanish for love knows no borders."

Anger as US delegates tell summit fossil fuels can help fight global warming. The Independent: "The Trump administration has held an event at a major UN climate summit to promote the use of fossil fuels in the fight against global warming. Branded 'laughable' by critics, the news comes after the US allied with other oil states included Russia and Saudi Arabia to stop a key scientific report influencing proceedings at the COP24 event in Poland. The side event, which featured representatives from the US government and energy industry, saw panellists insist so-called “clean” fossil fuels had a role to play in tackling global warming. Their presentations suggested innovation and investment in these energy sources would not only make them more competitive, but significantly decrease emissions as well. Proceedings were interrupted by activists infuriated by the administration’s continued focus on polluting fuels. The overwhelming majority of qualified experts agree that coal, oil and gas must be rapidly and completely phased out if the world is to stand a chance of meeting its ambitious climate targets and avoid catastrophic environmental consequences. According to the US State Department, the event was intended to 'showcase ways to use fossil fuels as cleanly and efficiently as possible, as well as the use of emission-free nuclear energy.'"

Activists demand Green New Deal at Dem leaders' offices. ABC: "Hundreds of pro-environment activists lobbied lawmakers on Capitol Hill Monday in an attempt to pressure Democratic leaders to endorse a Green New Deal for the new majority’s agenda in the next Congress. Protesters staged sit-ins at the congressional offices of Reps. Nancy Pelosi, Steny Hoyer and Jim McGovern, calling for a transition from fossil fuels to renewable energy and urging Democrats to leverage their power in the 116th Congress to enact green legislative proposals championed by progressives. 'The U.N. says we have 12 years to transform our economy and avert catastrophe,' said Varshini Prakash, Sunrise co-founder, as the sit-in began at Pelosi’s office. 'Over 1,000 young people took over Capitol Hill today because we all deserve good jobs and a livable future. The Democrats need a plan to make it happen.'"

Courts likely to strike down Republican lame-duck power grabs. The Guardian: "Republicans in Wisconsin, Michigan and North Carolina suffered stinging losses in November, but the parties aren’t transferring power quietly, or at all in some cases. On the way out the door, “lame-duck” state legislatures are bringing in last-minute laws that will strip power from incoming Democrats, gut voter-approved ballot initiatives, or otherwise undermine the election results. But some legal experts say the most alarming legislation the Republicans have passed is unconstitutional and unlikely to survive outraged Democrats’ legal challenges. Among other issues, they contend many of the Republican laws blur the constitutionally mandated separation of powers among the executive, legislative and judicial branches of government. Michigan Republicans are pushing through a bill that would strip authority over campaign finance from the Democratic secretary of state-elect. (The state previously hit the bill’s Republican author with multiple campaign finance violations.) The Michigan and Wisconsin legislatures are also granting themselves power to intervene in lawsuits over their unpopular laws, weakening incoming Democratic attorneys general. And last week the Wisconsin legislature passed laws that take power from the incoming Democratic governor, Tony Evers. In response, Michigan Democrats are pointing to the state’s separation-of-powers clause, which reads in part: 'No person exercising powers of one branch shall exercise powers properly belonging to another branch, except as expressly provided in this constitution.'"

Time’s Person of the Year: ‘Guardians’ of the truth, including slain journalist Jamal Khashoggi. WaPo: "Time magazine has announced its 2018 Person of the Year is 'The Guardians,' four individuals and one group — all journalists — who this year helped expose “the manipulation and the abuse of truth” around the world. They are the journalist Jamal Khashoggi, the Washington Post contributing columnist who was killed inside Saudi Arabia’s consulate in Istanbul in October; the staff of the Capital Gazette newspaper in Maryland; journalist Maria Ressa, the CEO of the Rappler news website, who has been made a legal target in the Philippines; and journalists Wa Lone and Kyaw Soe Oo, who have been jailed in Myanmar for nearly a year for their work exposing the mass killing of Rohingya Muslims. 'As we looked at the choices, it became clear that the manipulation and the abuse of truth is really the common thread in so many of this year’s major stories, from Russia to Riyadh to Silicon Valley,' Time magazine editor Edward Felsenthal said on the 'Today' show Tuesday morning, where the announcement was made."