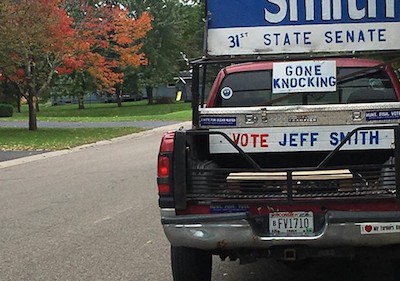 Senators, furious over Khashoggi killing, spurn president on war in Yemen. NYT: "Furious over being denied a C.I.A. briefing on the killing of a Saudi journalist, senators from both parties spurned the Trump administration on Wednesday with a stinging vote to consider ending American military support for the Saudi-backed war in Yemen. The Senate voted 63 to 37 to bring to the floor a measure to limit presidential war powers in Yemen. It was the strongest signal yet that Republican and Democratic senators alike remain vehemently skeptical of the administration’s insistence that the Saudi crown prince cannot, with certainty, be blamed for the death of the journalist Jamal Khashoggi. It took place hours after Secretary of State Mike Pompeo and Defense Secretary Jim Mattis briefed senators about the Yemen conflict in a classified discussion, which the administration had hoped would persuade lawmakers that Saudi Arabia must remain a vital American ally."

Mike Pence casts deciding vote to advance controversial judicial appointment. USA Today: "Vice President Mike Pence cast the tie-breaking vote on Wednesday to advance Thomas Farr’s nomination to a district judge post in North Carolina. The vote - mostly cast along party lines - sparked controversy due to some of Farr’s previous decisions, which has added a racially charged component in an already tough nomination. Democrats say that Farr, as an attorney hired by the state, defended racially gerrymandered congressional boundaries as well as a law that required photo identification to vote. The courts ruled against both measures. 'Mr. Farr was chief cook and bottle washer for the state that probably did more to prevent people, particularly African-Americans from voting, than any other state,' said Senator Democratic leader Chuck Schumer of New York. The history of the particular judicial opening Farr would fill has also contributed to the acrimony. President Barack Obama nominated two African-American women to serve on the court, but neither was granted a hearing after Republican senators objected, and their nominations stalled. If confirmed, they would have been the first black judges to serve on the U.S. District Court for the Eastern District of North Carolina."

Michigan Senate votes to gut minimum wage, sick leave bills. The Hill: "Michigan's Republican-led Senate voted on Wednesday to scale back measures that would increase the minimum wage and require businesses to provide paid sick leave to employees. The state Senate passed the two slimmed-down bills in a 26-12 vote, according to The Detroit Free Press. The newspaper noted that the vote occurred after a Senate committee made several changes to the measures and advanced them on a 3-2 party-line vote. The Michigan state House could vote on the legislation as soon as next week. The minimum wage was set to reach $12 per hour by 2022, but under the new changes it won't reach that level until 2030, according to the Free Press. The state's minimum wage is $9.25."

Key Mueller witness: I lied and I'm ready to die in jail. MSNBC:"In a blockbuster interview, key Mueller witness and Roger Stone associate Jerome Corsi admits to MSNBC’s Ari Melber that he lied to Congress, that he tried to get stolen Clinton emails back to the Trump campaign in 2016, that he 'absolutely' intended to help the Trump campaign by doing so, that he told Roger Stone about John Podesta’s emails and that his lawyers are still communicating with Trump’s legal team 'as if' there is a joint legal defense."

Left behind by Trump’s boom: the rural Americans who elected him. Bloomberg: "Times are tough all across rural America. Nationwide numbers paint a rosy picture of accelerating growth and near-full employment. Swaths of the countryside tell a different story, its protagonists barely scraping by as their jobs drain away in the downturns and don’t come back in the booms. The economic divide maps onto a political one, which only deepened in this month’s midterm elections. President Donald Trump claims credit for a vibrant economy. America’s rural landscape is dotted with reminders of where the jobs used to be. In Clay County, it’s empty smokestacks, fossils of a vanished coal economy. Federal money rescued rural America after the Great Depression of the 1930s, as the government poured resources into job-creating investments. Today, Washington’s main presence in places like Clay County is the U.S. Department of Agriculture. It helps with everything from building houses to providing medical services. Clay County got a $50,000 grant this year for an ambulance, an urgent need in a region blighted by opioid addiction. The agency also helped bring wireless Internet to remote areas. That creates opportunities for people to 'make good wages from their home,' said Anne Hazlett, the USDA’s assistant to the secretary for rural development. But the Trump administration plans to cut USDA funding by 16 percent in fiscal 2019, and revamp the food stamps it distributes."