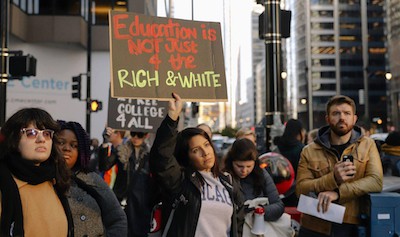 Republican wins Mississippi's US Senate runoff. The Guardian: "The Republican US senator Cindy Hyde-Smith has won her race for re-election in Mississippi, after a tense runoff during which she attracted national attention for a series of racially loaded remarks in a state with a notoriously complex racial history. In her victory speech on Tuesday, Hyde-Smith pledged to “always represent every Mississippian”, after defeating her Democrat challenger, Mike Espy, by a closer than expected 55% to 45%. The final Senate result of the midterms, Hyde-Smith’s victory gives Republicans a 53-47 majority in the US Senate, a gain of two seats. Democrat TJ Cox has taken the lead in the last outstanding midterm House race, for California’s 21st district, where a win would mean a 40-seat gain for Democrats."

What was Paul Manafort thinking? NYT: "Perhaps Mr. Manafort, who has enjoyed a lifelong reputation as a swashbuckling big-time gambler, is simply a lousy poker player. He blinked when the pot got too big and opted to fold, forfeiting what he’d already spent. But then some combination of unsettled resolve and a lifetime of lying as an M.O. made him hope that he could eat his cake and have it too — that he could lie his way out of the situation. This is not exactly irrational, but it is colossally stupid, particularly when playing across the table from Mr. Mueller and not knowing the cards the special counsel was holding. Those cards will now be revealed as a consequence of Mr. Manafort’s dithering. He will proceed directly to sentencing, in connection with which Mr. Mueller will provide the court with detailed proof of Mr. Manafort’s lies during the aborted cooperation period. That means evidence of the truthful answers to the questions lied about. Considering that Mr. Manafort’s cooperation almost certainly had to involve the highest targets and most important evidence, that memorandum will be a treasure trove of as-yet-unknown fruits of Mr. Mueller’s investigation, particularly into the possible connection of the campaign with Russian meddling in the election. It could conceivably contain Mr. Mueller’s understanding of Tuesday’s report, in The Guardian, that Mr. Manafort met with Julian Assange multiple times, including in March 2016, just before he took the helm of the Trump campaign, a job he was so desperate to have that he agreed to work free. For that reason, the memorandum may be filed under seal, but even so, it operates as a hedge against the possibility that Mr. Mueller’s report might eventually be bottled up at the Department of Justice, for example under the order of Acting Attorney General Matt Whitaker. It will ultimately be for the court, not Mr. Whitaker, to unseal the document. As for the formerly high-flying Mr. Manafort, he has nothing left to wager with. He is, permanently, a luckless wretch, out of options and tapped out. He has become a gambler’s worst nightmare."

Lost jobs, shrinking growth, and rotting crops — here are all the ways Trump's trade war is hurting America. Insider: "Eight months on from the opening salvos of President Donald Trump's trade war, and the real world impacts are starting to be felt across the globe. The US — which the trade war was ostensibly launched to protect — looks like it is likely to be the worst impacted, with some forecasters suggesting that as much as 1% could be knocked off economic growth in the coming years. On a smaller scale, companies and whole industries are already starting to feel the pinch from the US imposed tariffs, which have raised the price of importing a whole range of goods to the US, increasing costs for the very companies they were designed to protect."

Farm bankruptcies have doubled under Trump — and the worst is yet to come. Alternet: "The rate of bankruptcies among farms is rising steeply in the upper Midwest due to falling revenues from corn, soybeans, milk and other products. Over the last 12 months ending in June, 84 farms have declared bankruptcy in Wisconsin, Minnesota, North Dakota, South Dakota and Montana, more than doubling the number of bankruptcies over the same stretch in 2013/2014, according to the Federal Reserve Bank of Minneapolis. Additionally, the outlook moving forward doesn't look good. Some farm exports actually spiked in the second quarter in the race to beat the implementation of China's retaliatory tariffs. Soybean sales, for instance, have now 'slowed to a crawl,' according the Star Tribune. Given the price drops on the products since June, Minneapolis Fed analyst Ron Wirtz tells the AP, "The trajectory of the current trends suggest that this trend has not yet seen a peak.' Analysts told the AP that many farmers were already producing beyond demand before the trade war with China escalated. Trump's tariffs have exacerbated what was already a looming problem. 'Grain farmers have had low prices for the past three years but high yields have helped them through. We’re just waiting for a turnaround,' said Mark Miedtke, the president of Citizens State Bank in Hayfield. 'We’re waiting for the tariff problem to go away.'"

The game-changing promise of a Green New Deal. The Intercept: "I feel more optimistic about our collective chances of averting climate breakdown than I have in years. For the first time, I see a clear and credible political pathway that could get us to safety, a place in which the worst climate outcomes are avoided and a new social compact is forged that is radically more humane than anything currently on offer. We are not on that pathway yet — very far from it. But unlike even one month ago, the pathway is clear. It begins with the galloping momentum calling on the Democratic Party to use its majority in the House to create the Select Committee for a Green New Deal, a plan advanced by Ocasio-Cortez and now backed by more than 14 representatives. The draft text calls for the committee, which would be fully funded and empowered to draft legislation, to spend the next year consulting with a range of experts — from scientists to local lawmakers to labor unions to business leaders — to map out a 'detailed national, industrial, economic mobilization plan' capable of making the U.S. economy “carbon neutral” while promoting “economic and environmental justice and equality.” By January 2020, the plan would be released, and two months later would come draft legislation designed to turn it into a reality. That early 2020 deadline is important — it means that the contours of the Green New Deal would be complete by the next U.S. election cycle, and any politician wanting to be taken seriously as a progressive champion would need to adopt it as the centerpiece of their platform. If that happened, and the party running on a sweeping Green New Deal retook the White House and the Senate in November 2020, then there would actually be time left on the climate clock to meet the harsh targets laid out in the recent IPCC report, which told us that we have a mere 12 years to cut fossil fuel emissions by a head-spinning 45 percent. Pulling that off, the report’s summary states in its first sentence, is not possible with singular policies like carbon taxes. Rather, what is needed is 'rapid, far-reaching and unprecedented changes in all aspects of society.'"