Is Government Of, By, and For the People Over?

“[W]e here highly resolve that these dead shall not have died in vain—that this nation, under God, shall have a new birth of freedom—and that government of the people, by the people, for the people, shall not perish from the earth.” 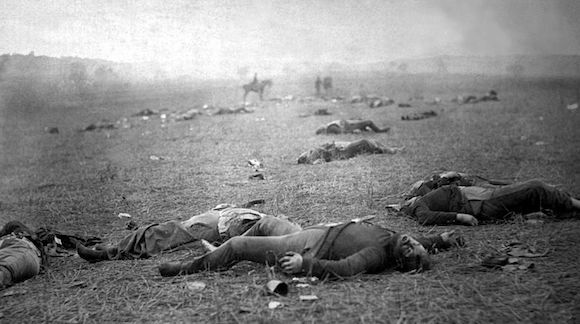 The 2018 Midterm election, the 2016 Presidential election and the confirmation of the lifetime appointment of two extreme right-wing Supreme Court by Senators representing a minority of the people raises the question of whether “government of the people, by the people, for the people” is in the process of perishing, if not from the earth, then from the United States of America.

Trump and McConnell are celebrating their increased majority in the Senate, although Democrats won the raw popular vote by over 15 percent, with 45,884 million voters - 56.8 percent of the electorate - supporting Democratic Senate candidates, and 33 million, or 41.6 percent of voters, supporting Republican candidates, according to the latest New York Times tallies.

Hillary Clinton got a clear majority of 2.8 million more votes than Donald Trump in 2016 - but he is President, after winning the Electoral College by an aggregate of 77,744 votes in Michigan, Wisconsin, and Pennsylvania. Moreover, there’s strong evidence that a much larger number of voters—many of them minorities—were illegally purged from the voter rolls in these states. Had their votes not been suppressed, Clinton, rather than Trump, would likely be President now.

Yet with Kavanaugh and Gorsuch likely to serve for decades, the cold dead hand of this minority of Senators may determine the fate of the country long after they’re gone.

In short, the United States is being ruled by a President, Senate, and Supreme Court chosen by a minority of Americans.

It is equally alarming that the Republican men (and the handful of women) controlling these minority-run institutions have chosen to govern from the extreme right rather than seeking compromise with the majority.

They rammed through a tax cut for corporations and the wealthy by putting the cost on the government credit card, and are already calling for cuts to Social Security and Medicare because the national debt is now too large, due to their own actions.

They almost denied tens of millions of Americans access to health care by coming within a vote of repealing The Affordable Care Act, saved only by the late John McCain. They could have chosen center-right Justices for the Supreme Court, but instead chose Justices from a list prepared by the hard right Federalist Society, who, even if Democrats eventually reclaim the executive and legislative branches, will likely overturn laws and regulations protecting the environment and the financial system.

Conservatives will argue that America is a Republic - not a direct democracy - and the Founders intentionally wrote a Constitution protecting the rights of the minority against the potential tyranny of the majority. There’s truth to this. For example, the First Amendment was intended to protect the freedom of speech and religion of those with minority views.

The Electoral College and the awarding of an equal number of Senators to large and small states were intended to protect the minority in smaller states from over-reach. But these provisions were equally enacted to protect slave states from being politically overwhelmed by free states. Today’s minority-run government is, in large part, a legacy of America’s original sin of slavery.

On the hallowed ground of Gettysburg, where over 50,000 Northerners and Southerners died in a battle over the integrity of the Union and to decide the future of slavery, Abraham Lincoln dedicated the nation to the proposition “that government of the people, by the people, for the people, shall not perish from this earth.”

It’s possible that minority rule could continue for a while. But if it continues for long, political warfare and social chaos is likely to increase and the fate of the Union is in danger. An extended period of government of, by and for the minority, could mean that Lincoln’s ideal of popular government may well perish from this earth, or at least that part called The United States of America.

What can be done? Amending the Constitution to create a Senate more reflective of the population or to eliminate the Electoral College and replace it with direct election of the President is virtually impossible, since small states who benefit would oppose it.

What is possible is fighting voter suppression, and making it easy rather than hard for ordinary people to vote. Public financing of elections can reduce the nefarious influence of big money on our politicians. Replacing the current partisan gerrymandered redistricting system with a system of non-partisan commissions could go far toward protecting the power of the majority of voters in House and state legislative elections.

Ranked-choice voting—which Maine has been the first state to adopt-- could make the meaningful growth of third parties possible, help break the partisan gridlock of the winner-take-all two-party system, and expand the range of political choices.

Such moves would not eliminate the minority-rule bias in the Constitution, they might help America continue to be a flawed, but more-or-less genuine democracy, instead of drifting, or even racing, towards becoming a banana republic.