Those who speculated that the Democrats' prospects in the midterm elections would only happen if they won big in the Midwest were prescient. Indeed, it's hard to make the argument that any semblance of a Democratic Party "wave" would have been possible without key wins in these states. 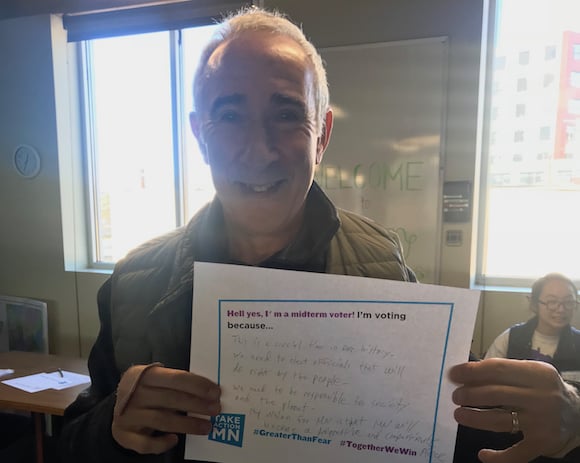 The need for Democrats to prevail in the Midwest was critical to the party's success. Donald Trump won Indiana, Iowa, Michigan, Ohio, and Wisconsin in 2016 and came close in Minnesota. But a perhaps more important trend in these states had been the Republican dominance down ballot where Republicans controlled both chambers of state legislatures and governors and most of the U.S. House seats in Michigan, Wisconsin, Iowa, Indiana, and Ohio.

In the 2018 midterm contests, that trend took a substantial turnaround. Of the 75 Republican Congressional Representative seats that were rated "vulnerable," 28 flipped Democratic, so far, and 12 of those red-to-blue flips were in the Midwest – four in Pennsylvania; two each in Illinois, Iowa, and Minnesota; and one each in Kansas and Michigan – more than any other region. The Democratic Party held on to vulnerable Senate seats in Ohio, Michigan, Minnesota, Pennsylvania, and Wisconsin.

The importance of Midwest races to the Democrats should also be appreciated because of what the winning campaigns were about, more often than not.

Democrats running for offices across the Midwestern states ran against "the Republican establishment rather than against Mr. Trump," according to political analysts for the New York Times.

"Democrats in these states ran on health care, education, and other bread-and-butter issues," writes Jennifer Rubin, a Republican political analyst for the Washington Post. Education was "the major theme," writes Ruth Conniff for The Progressive – especially in Wisconsin races, but also throughout the region.

Indeed, up and down the ballots, especially in state contests, Democratic candidates emphasized increasing school funding and ending or at least providing greater government control of school privatization efforts, such charter schools and voucher programs that give families public funds to transfer children to private schools at taxpayer expense.

In Michigan, Gretchen Whitmer knocked off her Republican opponent for an open but previously Republican-held governor's seat by campaigning on women's reproductive health and investing in public infrastructure – especially in public education. She won the backing of the National Education Association by calling for greater investments in schools, ending for-profit charter schools, and enacting more accountability for nonprofit charters.

Down-ballot wins in the Mitten State included one of the country’s first two Muslim-Americans to serve in Congress, Rashida Tlaib, a Democrat elected in the 13th Congressional District around Detroit. Tlaib's campaign pledged to "increase funding for public schools and to ensure charter schools are regulated and held accountable. Charter schools cannot be allowed to take money away from public schools while failing our kids."

In Wisconsin, where voters rated education a top issue in the election – with 40 percent saying it’s a first or second priority, second only to the economy at 41 percent – longtime state school superintendent Tony Evers defeated two-term incumbent Republican Governor Scott Walker. Evers drew a sharp contrast to Walker, who had made Wisconsin a national leader on cutting education funding. "Evers proposed increasing funding for schools by $1.4 billion over the next two years," while Walker pledged increased support but left few details.

Pennsylvania reelected Democratic Governor Tom Wolf who was swept into office by a wave of opposition to the previous governor's massive budget cuts to public schools. In this year's midterms, voters in state level races flipped a substantial number of seats in the State Senate and House from Republican to Democratic, although Republicans remain in the majority in both houses.

In Pennsylvania Congressional races, the red-to-blue trend was significantly more apparent, where Democrats split the 18 seats formerly dominated by Republicans. Among the victors in Pennsylvania U.S. House races were May Gay Scanlon who ran on "making education, and its funding, a national priority," and Susan Wild whose campaign pledged to "keep public tax dollars in public schools. The myth that 'school choice' will be the tide that lifts all boats is much like the myth that tax cuts for the wealthy will 'trickle down' to the middle and lower class. Tax revenue should be invested in our public schools – especially those that are struggling."

In Illinois, Democratic challenger J.B. Pritzker defeated incumbent Republican Governor Bruce, in part, by drawing stark differences on education. While Rauner pledged to expand the state's voucher program to $100 million tax credit scholarship “to a billion” dollars if he could, Pritzker said he'd curtail the program, which already diverts public tax dollars to pay for private school tuition for 5,600 students, and use that money instead for public education.

In Minnesota, voters elected Democratic candidate Tim Walz, to an open governor's seat.. Walz, is a former public high school geography teacher and football coach, who during his tenure in the U.S. House of Representatives authored the Forever GI Bill to expand veterans’ education benefits and voted against a school voucher program the federal government funds in Washington, D.C..

While he made support for public schools a cornerstone of his campaign, his opponent Jeff insisted that what Minnesota families need is a voucher program like Michigan’s or Wisconsin’s that would direct public education funds to private schools. Walz pledged to block any proposed voucher programs.

Of course, Democrats had setbacks in the Midwest too, especially in Ohio where a strong candidate for governor lost to a vulnerable Republican.

But as Democrats now prepare for hopefully bigger wins in 2020, the party should take the valuable lessons learned from the Midwest midterms to heart.