Standing Up For Family Farmers In Central Iowa

Nick Schutt is the real deal. He farms corn and beans in Hardin County, Iowa on 80 acres of land that have been in his family for three generations. Nick has seen corporate agriculture pollute the landscape – and transform the social fabric - of rural life around him. That led him into activism, and now to run for the Hardin County Board of Supervisors this November.

You might not think Big Ag would take an active interest in a rural county election, where three candidates are running for two open seats - but they’ve pulled out all the stops to stop Schutt. A dark-money group, “Iowa Citizens for Truth,” has sent out postcards with Schutt’s mug shot from his arrest at a protest against the Dakota Access Pipeline in 2016, saying “There Goes The Neighborhood.”

Schutt doesn’t mind this a bit - and he doesn’t think his neighbors do, either. He’s proud of his efforts to stand up to corrupt politicians,Big Ag, and his efforts to revitalize rural Iowa. We caught up with him to talk about his candidacy and what his priorities will be if he’s elected.

OF: Tell us a bit about your life in Hardin County, and why you’re running for County Supervisor.

NS: I’m a third-generation farmer: I farm my dad’s land, which will someday be handed down to me and my siblings. I also work for Hardin County, going around picking up recyclables to keep them out of the county landfill. It’s remarkable that we can save that much from going into the environment and contaminating our wells.

I picked up some recycling today in Steamboat Rock - that’s one of our small communities here in Hardin County - and my nose was on fire from the smell of manure being applied. I’ve been in the country for twenty years on acreage that ‘s paid for, and I’ve been told that if you don’t like the way you live, move to town. Well, that’s not an option anymore, when our towns smell as bad as the rural areas.

The County Board of Supervisors oversees different facets of the local government. They do permits for everything from drainage to CAFO (concentrated animal feeding operations), basically divvying out what the taxpayers pay in. So I think it’s very important that we have someone there who represents all taxpayers, and not just special interests, such as the Farm Bureau, and some of the large corporate ag groups, that take a toll on our resources here.

OF: How have big corporations changed agriculture and life in central Iowa?

NS: Iowa may be the number one agricultural state in the Union, but they virtually make it impossible for a beginning farmer to get established because of all the corporate ag out there. My goal was always to farm full time, to make a living, but you can’t do it.

For a small producer around here, about the only place you can sell your livestock would be Craigslist. Prestage (the nation’s sixth-largest pork producer) put up a slaughter plant, and claim they will purchase your pigs – but there is no competition there. You’re going to get the bottom of the barrel when it comes to price; you’re not going to get what big corporations like Iowa Select or Maschhoffs are getting.

And when it comes to some of the tax benefits that we’ve seen recently in the news, such as the tariffs, those go to big corporations, too. Donald Trump said he’d designate “$12 billion to help out farmers.” But it’s corporate ag giants, like Iowa Select, that are going to receive $8 a head, not the contractors who take care of the chores.

The corporations that own the pigs will receive that $8 a head - and that comes off what all of us pay in taxes. Everyone pays, from kids working to get through college, all the way to the elderly people who might work at Walmart as door greeters, trying to make a living. So everyone that’s taxed is paying in, and corporate ag is benefitting – that’s not right.

OF: Why has Big Ag taken such an interest in your campaign?

Because Hardin County was one of the founding counties where the pork industry had taken off, being home to Iowa Select and Heartland Pork. It’s a pork powerhouse right here - but I think Hardin County needs to stand up for its residents, not for the industry in ways that are not right.

Around here, if you form an opinion or statement against corporate ag, they will do everything they can to shut you up. Have you seen the flyers that they’ve put out? I stood with a protest protecting our clean air, clean water, and the farmers’ rights down in Boone, Iowa, thirty of us were arrested, and I spent six hours in the county jail.

There’s a group out of Sioux City, “Iowans for Truth,” that put out a smear campaign to try to keep me quiet, to destroy my chances of actually winning. I actually think it’s going to backfire, because all the people around here, whether you’re urban or rural, are feeling the effects of this large-scale livestock concentration here. 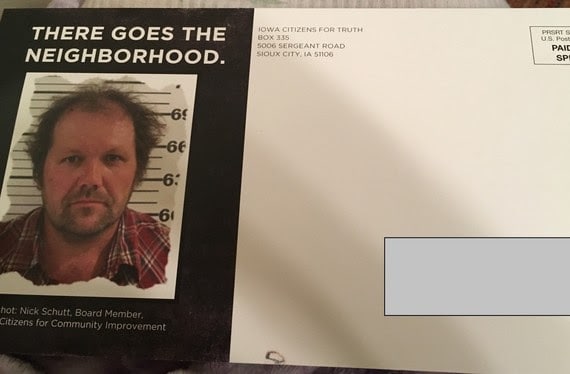 I felt it was important to protest against the (Dakota Access) pipeline because the local farmers who own the land are not being represented by their government. There were several attempts to talk to the Iowa Utilities Board and our county and state legislators, but no action was coming out of the requests for meetings on this topic.

22 politicians - Republicans and Democrats - took money from Dakota Access. And lo and behold, we have a pipeline going through Iowa. That information, the 22 poltiicians who took money from Energy Transfer Partners and the Bakken Pipeline, is online, and there’s a range of politicians who did take money. In their statements, they always goes back to “It’s Iowa Utility Board’s jurisdiction as to whether this goes through or not.” That’s just politicians passing the buck in order to get this pipeline through.

I’ve had a lot of people slap me on the back, telling me what a brave thing that was, but I definitely want to make it clear it wasn’t just me. There were 29 other brave souls who went out and did civil disobedience in order to make this statement. So my hand’s out to anyone who sympathizes with the issue of clean air and clean water.

OF: What can the Board of Supervisors do to rein in the influence of corporate agriculture in Hardin County?

NS: At one time, we had 17 percent of the state send letters to create resolutions, saying we need stronger rules and regulations towards the factory farm industry. Now that’s bumped up to one in four counties. So other counties have stepped up to the plate, more and more counties are getting on board. They are saying this is not sustainable - we are losing population here, and we need to talk about it. Hardin County has done a resolution, but it’s rather weak and resembles what the Farm Bureau says.

(Iowa Governor) Kim Reynolds took credit for the “Number One In The Union” award that was given to Iowa, but Hardin County has seen a population decrease of 3 percent, which is 495 people over a ten year period. We need to change that around, and I believe one reason we have lost people is because of the quality of life.

OF: What’s at stake for Iowa, and for the nation, in these elections?

NS: Our stake is our future, which is our kids. We need clean air, clean water. Public services are disappearing. Here in Iowa Falls, they’ve announced they’re no longer going to be doing OB services. So this is not good for local economies, either. They say they’re going to create jobs, but I’m not seeing the good quality, good paying jobs coming here.

Iowa Select is saying they’ve created 5,000 jobs here in Central Iowa. That might be true, but how many jobs did they displace? I don’t see any new local Walmarts, or Menard’s – and now we’re losing our OBs and our hospitals. If they’re creating good-paying jobs like they claim they are, we shouldn’t have had three local schools close their doors because they’re not thriving. Our schools, our hospitals ought to be thriving if they’re bringing in all these people like they claim. We’re not seeing it. Our small towns are dying.

OF: If you are elected, what will your priorities be?

NS: My priorities are clean air, clean water. We have permits that have gone through for these CAFOs - Iowa Select promised us windbreaks and electrostatic fences that capture the dust particles, contain the smells and drop them to the ground. They promised us items that would help preserve our quality of life. And now that the buildings are up, there’s no trees, there’s no odor control, electrostatic fences, and the road issues aren’t getting any better.

So the County Board of Supervisors needs to follow through and make sure that if they say they’re putting up trees, they don’t’ get another permit until they put those trees in. And if they promised a fence, that fence needs to be put in. Otherwise, if you guys aren’t doing what you say you’re doing, we’re not going to issue any more permits. That’s my viewpoint.