Everyone knows Jeff's truck – it’s a red pickup with a big, hand-stencilled sign in the back that says, “Stop & Talk.” If you travel the back roads of western Wisconsin, most people have met its driver, the “stop and talk guy,” Jeff Smith. That’s because this Eau Claire native has logged thousands of miles in his grassroots candidacy for Wisconsin’s State Senate in District 31, which includes parts of nine counties.

Smith is a bit like George Bailey, the small-town hero of Frank Capra’s classic 1946 film, “It’s A Wonderful Life.” After high school, Jeff ran a successful window-cleaning company in Eau Claire with his father, then got involved in activism when his children attended the city’s public schools. He served on a state task force for educational excellence and was elected to Wisconsin’s State Assembly in 2006. After four years advocating for early education and the environment, he lost his seat in the Tea Party wave that swept Governor Scott Walker into office, and later tipped Wisconsin to Donald Trump in 2016.

Now Smith and a rising generation of activist politicians are poised to take Wisconsin back for progressive values this November. Adam Kruggel, an organizer for People’s Action, caught up with Smith on the campaign trail to get his insights about the challenges faced by rural America, and what his priorities for the state will be. 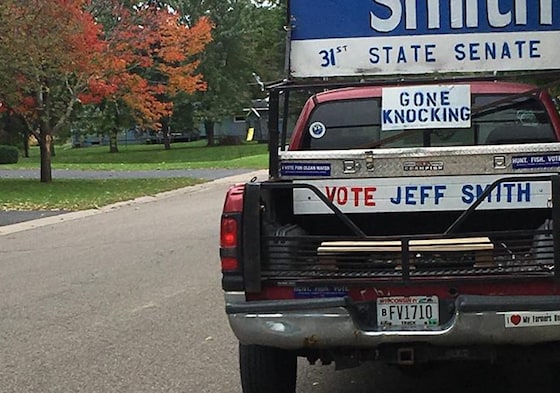 OF: Where do you come from, and why have you given your life to public service?

That’s kind of a long story (laughs)… public service became a part of me when my children started going to school and I started volunteering in the schools. I not only saw the school’s needs, but I saw the schools and these children who have different needs that I wanted to be a part of. I guess that it just became natural to me – we’ve got to be there, to make sure that their future is bright.

I grew up in Eau Claire, it’s the heart of my district. I’ve lived there all my life – one of those people who never really traveled very far. It’s just a part of me. I grew up in a family with seven children, and my father had a small window-cleaning business. I started working when I was twelve years old. Saturdays and some nights he’d drag me along, scrubbing floors, doing all of the extra things that he had to do back in those days. But after that, getting out of high school, he really wanted and needed someone he could depend on to work with, so he asked me to stick with him, and I did.

So I ended up buying the business from him and it worked out well for me. I moved -in to doing a lot more of the bigger kind of contracts, and became one of those people – like Spiderman hanging from buildings – but I also ended up also turning a small, two-man business into twenty-two employees, which moved me into being able to be more active as a community member, and I found that was really my calling.

OF: Why was it so important to run for office now?

Originally I ran for office because I saw the need for funding our schools - that’s where I really became more aware of the needs. And I just got really frustrated with the politics going on in our state at that time – that was back in 2002. I just had to step up – I was already a town chair, I was on the governor’s task force for education, I did all of these other things, but I realized that if I was going to make a difference, I had to be one of those policy-makers, not just a policy follower.

So I was determined to do that, and I actually ran in a district, my district, that was held by a Republican for fourteen years. I wasn’t supposed to win, wasn’t given much chance and wasn’t given much help. But I won, and held that for two terms, lost in this Tea Party revolution thing.

But it’s too important – I didn’t go into this because I needed money; because I was making money as a businessperson. I didn’t go into this because I needed the title, because it’s not much of a title. I went into it for our future – and that hasn’t changed. So that’s why I’m still doing this, why I got into organizing. And I’m so grateful that I actually have made that connection with Citizen Action of Wisconsin and People’s Action, because that gave me this purpose and that venue to continue to be active.

OF: What is at stake in this election for Wisconsin and the country?

There’s so much at stake. As you know and I know, western Wisconsin is like the epitome of what went wrong, in an area that voted for Obama twice, and then turned around and voted for Trump. It takes people like me who live there and have lived there my whole life, and have witnessed that, I think, to step forward and say, “That’s not right, and that’s not who we are.”

We are people who are very proud of our environment: the people I work with and am associated with, the environment is the important piece of our being. So when we are going to leave behind potentially poisoned water - that scares the heck out of people. They, and I, don’t want to be known for that, and responsible for that.

When we see our rural schools closing because the funding isn’t there, and politics is getting in the way, our people can’t get health care access, and our clinics and our elderly care homes are closing in small communities, so they have nowhere to go, that’s a huge issue where I come from.

So these are really important issues, and this is the time. If we don’t do it now, I don’t know what’s going to happen in the future.

OF: What is the path forward for Wisconsin and the country at this time?

I can just speak for where I come from, and why people flipped from being Democrats to Republican, or going very Conservative. It’s because they don’t feel they’re being heard. They’re not being heard. I know that’s rhetoric everyone’s heard before - it’s said over and over - but I don’t think they really know what that means.

What it means, from what I’ve observed, from talking to people, ‘cause I’ve talked to thousands of people, is that every time we as progressives talk about, or get behind a community or a population that is being underserved, the white male working class people out there who are in rural areas feel like we don’t mean to serve them. Or that we’re in opposition to what their needs are. That’s what’s happening –they don’t feel like they’re being heard, and we have not projected the message out there well enough that when we are out there trying to protect and trying to lift other populations up, we totally get we’re lifting everyone up. We just have not done a very good job of getting everyone to understand that.

OF: How have you tried to address that conflict in your campaign?

We’re going to have a progressive, liberal Democrat representing western Wisconsin, in a very rural district, because I talk to people. I’m out there out in the open with my truck with a big sign that says, “Stop and Talk to Me!” People are welcome, and that’s all they really want - someone they can talk to, who listens to them, and responds to them.

OF: What is the agenda that will help move Wisconsin and the country forward?

We need to raise wages. In Wisconsin, I hear Republicans now in forums that we’re in, all they want to do is brag about that: “Oh, we have an incredibly low unemployment rate.” I say we may have a low unemployment rate, but what’s really incredible is the low wages. And they have been stagnant for 40 years.

So you can talk about unemployment all you want, but when people have to hold two to three jobs to be able to pay the bills that they used to be able to do forty years ago with one job, something is wrong. And that’s probably the most important issue now for any family right now: the wages, stagnant wages, whether or not they can afford to pay for their health care or even have health care access, whether or not they can afford to pay rent, which is also going up exponentially, but the wages are the same, or buy a house – that’s getting to be out of the picture for most people.

OF: What’s your message for the progressive movement around the country?

We’re all in this together. There aren’t any heroes out there - no individuals you’re going to just grab on to and they’re going to drag you to the top. We’re all in this together, and it’s going to take a movement, not just certain individuals, if we’re all waiting for someone to step forward. I love Elizabeth Warren, but one person can’t do what needs to be done, at any level of government. And it’s going to be a movement of everyone coming together. And we always constantly have to keep preaching that. Because we can’t let the egos of the politicians get away from them – to think that they are going to be some sort of heroes. Because they have to keep listening, and they have to keep embracing everyone around them to lift us all up.

Tina said, “Well, they think corporations have rights. So we want nature to have rights!” I am so inspired by that - I can’t wait to introduce that in the state of Wisconsin.