There’s Nothing More Powerful Than People Taking Back Democracy

Something good is happening in the Gem State. Real good. You might not read it yet in headlines, but it’s happening - and real - everywhere from Boise to Idaho Falls. 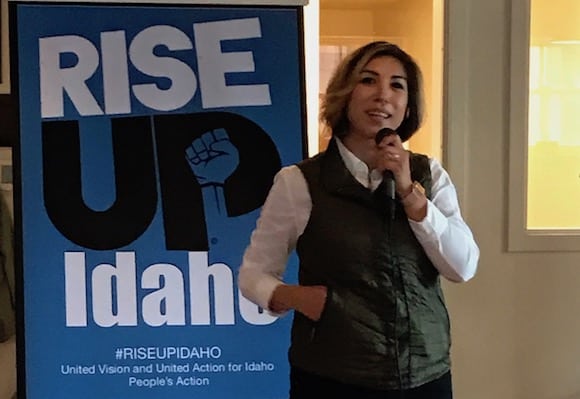 "We're winning the war of ideas, and that's why they're worried,” says Paulette Jordan. “They might outspend us, but there's nothing more powerful than people deciding it's time to take back democracy - and they know it."

You probably know Paulette, but let me introduce you: she’s the thirty-eight year old rancher and farmer who’s running as a Democrat to be Idaho’s next governor. She’s a fearless and outspoken advocate for the expansion of health care and fully funded K-12 education in our state.  She was elected in 2014 to Idaho’s House of Representatives, where she served on the Business, Energy and State Affairs Committees.

Paulette’s also an enrolled citizen of the Coeur D’Alene tribe – she grew up on the reservation and served on her Tribal Council before holding statewide office, and is the descendant of chiefs from both the Sinkiuse and Yakama nations. If elected, Paulette will be the first Native American woman to serve as a state governor. Ever.

At United Action for Idaho, we’ve gotten to know Paulette really well, because she was one of the first to answer every question on the thirteen-page questionnaire we sent last April to  candidates standing in this year’s election – all 41 Republicans and Democrats.

“Why is it so long?” some complained. “I just don’t have the time,” said others. But not Paulette. She answered every one of the forty-five questions, and we’ve been proud to stand with her, and the sixteen others who endorse our RiseUp Idaho platform, ever since. 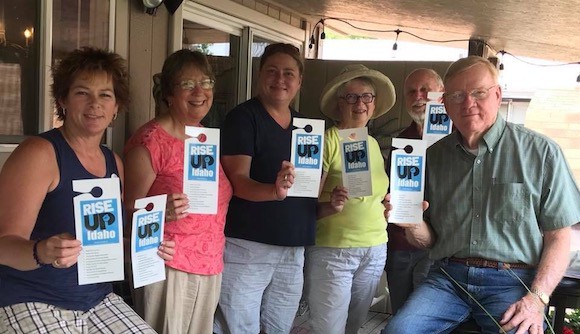 She stands with us because she knows, as we know, that the RiseUp Idaho platform reflects what Idahoans really want – it’s a people’s platform, not a political party statement. Our candidates agree to be held accountable to voters in complete transparency, which is what the people want.

How do we know this? Because over the past eighteen months, we’ve traveled around the state and held hundreds of town halls and forums, asking ordinary people, ‘What are the most important issues for you, your family and your community?’ 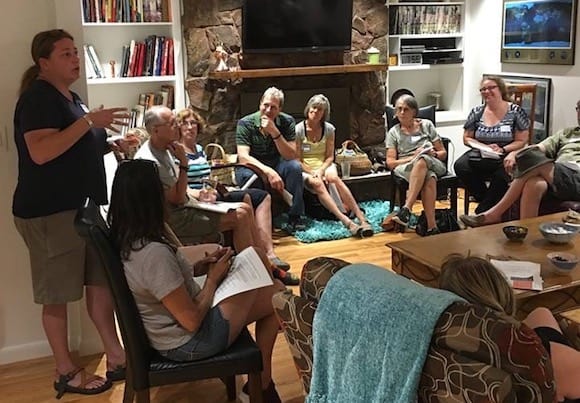 We never – not once - asked how people voted, if they had voted in the past, or what party they belonged to.

What Idahoans said matters most to them is what we put in the RiseUp Platform - nothing more, nothing less. It’s that simple. We wanted to make sure that all of the issues on our agenda reflect where people are – not what we think their issues are, but what their issues actually are.

Like other People’s Action member groups around the country, we pledge to put people and planet first, with access to health care and a fair economy for all. But our RiseUp Idaho platform also includes what people around our state say matters to them: gun sense, preservation of public lands, and restoring the authority of local governments.

Everywhere we go – and we’ve held hundreds of these meetings across the state – these are the populist values that a majority of Idahoans tell us they share. These are the values that bring us together.

But something strange happens sometimes when you say the right things: those who don’t share your values get nervous. Very nervous. And that’s what’s been happening in Idaho.

Paulette and her running mate for Lieutenant Governor, Kristin Collum, have come under attack from the local GOP – none of whose candidates could find the time, by the way, to answer our questionnaire – with allegations that they and the RiseUp platform are propped up by outside donors.

First of all, this is a lie. Flat out. United Action for Idaho and the RiseUp platform are entirely funded by small donations of Idaho dollars. Period. Second, the Idaho GOP should know better than criticize others, when they accept millions in dark-money dollars to support their candidates.

They even posted pictures of Paulette and Kristin listening to and talking with voters in Stanley - as if that were a bad thing - while their candidates were hanging out in the media booth at an ISU football game. 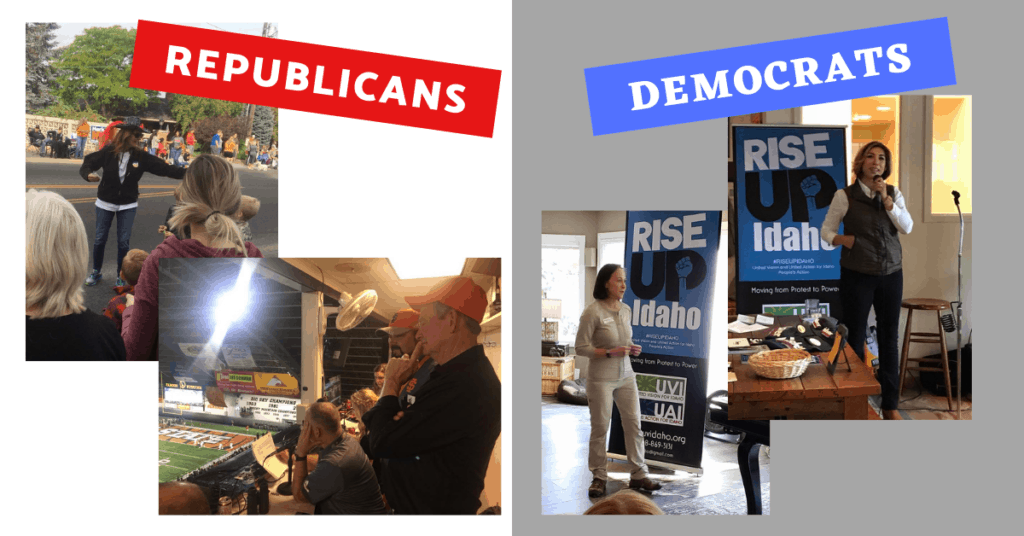 The bottom line is they’re running scared. This is what you do when you won’t – or can’t - compete with real solutions for the real people our state.

People want real leaders who stand up for them, not the same divisive party politics. As a candidate who’s traveled all over eastern Idaho and talked to voters, I know they’re tired of the scare tactics and half-truths that are used by some politicians and political operatives as a substitute for meaningful policy.

That’s Aaron Swisher, who’s running as a Democrat in Idaho’s Second Congressional District. He also stands with us, and we’re proud to stand with him.

And here’s Karen Ortiz-Evans, one of our longtime members:

I am widow, mother, grandmother, senior citizen,  previously owned a small Idaho agricultural business for 27 years, I am not a Democrat, nor am I left-wing radical. I am simply an ordinary person like many others Idaho citizens concerned about the division in our country, tired of elected officials who don’t represent all Idahoans, feeling like my voice is not being heard.

I am left to believe that if you cannot win on issues you must resort to smear campaigns and scare tactics.  Stop labeling people and start talking and listening.

Karen knows, as do Paulette, Kristin and Aaron, that in Idaho, we’re winning the war of ideas. Ours is a campaign by the people, for the people.

The only chance they have to get support for their platform - or lack of one - is to lead from fear. We choose to lead from hope.

In Idaho, we’re restoring faith in democracy - one heart, one voice and one vote at a time.