Will the FBI's Kavanaugh Probe Be a White House Coverup?

If you want to discover the truth instead of cover it up, would you appoint the accused’s lawyer to supervise and control the investigation of the charges against him? 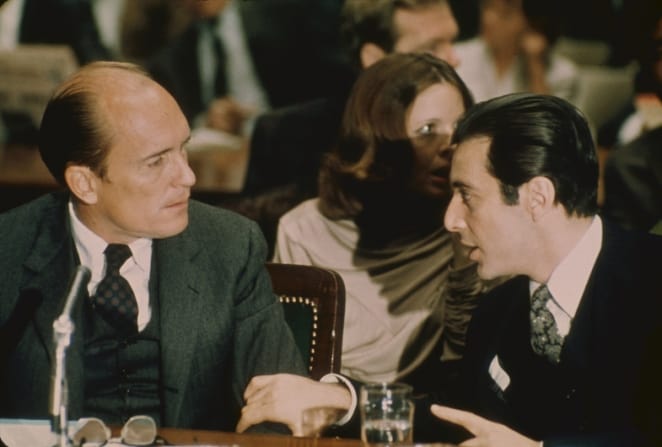 Hagen and Corleone, or Kavanaugh and McGahn? Photo credit: The Godfather Wiki

McGahn is the Federalist Society insider and White House counsel who steered Trump to pick Kavanaugh from the list of Far-Right Supreme Court candidates the Society put on his desk. He has since been in charge of shepherding Kavanaugh's nomination through the Senate, advising the candidate in Judicial Committee hearings. He has spent days behind doors in the White House, coaching Kavanaugh on what and how to testify.

If you remember Francis Ford Coppola's Godfather movies, this is a bit like putting Corleone family consigliere Tom Hagen in charge of an FBI investigation of the Don.

McGahn and GOP Want to Bar FBI From Key Interviews

So far, the list is limited to the three individuals whom Christine Blasey Ford testified were present at the high school gathering where she asserts Kavanaugh tried to rape her. Mark Judge, the drunken wingman who Dr. Ford says egged him on, has already claimed he has no memory of the incident. P.J. Smyth, who was downstairs, has also stated he does not recall the event. While Dr. Ford's friend Leland Keyser first stated through her attorney that she doesn't recall the gathering, she has since clarified that she believes Dr. Ford's account.

The final witness on the approved list is Deborah Ramirez, who claims a drunken Kavanaugh exposed his penis to her and forced it into her face during a Freshman party at Yale.

Notably, witnesses whom McGahn and his allies won’t allow the FBI to interview include former classmates who have contradicted Kavanaugh's testimony with eyewitness accounts about his youthful drinking, partying,  and sexually aggressive behavior towards young women.

The witnesses the FBI may be banned from interviewing include Julie Swetnick, who submitted a sworn affidavit that Kavanaugh regularly drank excessively and participated in sexual misconduct in high school, including lines outside a bedroom door where multiple boys waited to have sex with a drunken and possibly drugged girl inside.

On “Fox News Sunday,” Sarah Huckabee Sanders said an investigation of Swetnick’s claims and the question of whether Kavanaugh misled Senators during the hearings are off-limits to the FBI.

But more witnesses are coming forward to confirm Kavanaugh was a problem drinker in high school and college, and often became aggressive, including sexually, when drunk. In his Senate testimony, Kavanaugh mentioned beer over 30 times, a beverage he apparently has a great fondness for and doesn’t know how much is too much, according to this testimony.

If the FBI is allowed to question witnesses who swear under oath that Kavanaugh regularly drank heavily and then behaved aggressively, it lends strong credibility to Dr. Ford’s story of a drunken, teenaged Brett Kavanaugh accompanied by a laughing and drunk Mark Judge, pushed her into a room, pinned her to a bed, tried to remove her clothes, and put his hand over her mouth when she tried to scream for help.

This incident was seared for life into the brain of a traumatized Dr. Ford. But it's plausible that that it has been forgotten or dismissed by the heavily drunk Kavanaugh and Judge as just another high school ‘bro prank, with little consequence at the time on their lives or inebriated consciousness.

If the FBI investigation is controlled by McGahn and limited to 4 or 5 witnesses, it is a cover-up and a sham.

Apparently, McGahn has had some conversation with Senators Susan Collins, Jeff Flake, and Lisa Murkowski abut the scope of the FBI investigation. The question is whether this sham investigation will satisfy at least two of these Senators, and give them political cover they will need to vote to confirm, or whether they will demand a full and thorough FBI investigation instead of a cover-up.

And  it may be up to the people - like Ana Maria Archila and Maria Gallagher, the two courageous women who confronted Jeff Flake in an elevator on Friday - to convince these wavering Senators that permitting a sham investigation and confirmation will guarantee their infamy in history.