Our country’s overdose crisis kills more people every day than gun violence, suicides, and traffic accidents.  Even more shocking is that these lives could be saved – yet we fail to act.

Our government’s failure to save lives, when it knows how, is the greatest tragedy of all - and we refuse to accept it. 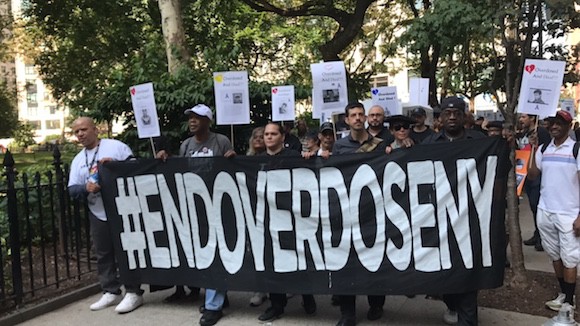 That’s why on August 31, International Overdose Awareness Day, VOCAL-NY and other People’s Action affiliates across the country demand the common-sense, compassionate solutions to drug use that will actually save lives.

VOCAL-NY is a grassroots, membership organization that mobilizes low-income New Yorkers to fight for policies that end the war on drugs, mass incarceration, homelessness, and HIV/AIDS.  Some of our most recent wins include passing a law requiring New City Shelters staff and residents are trained on how to use naloxone, getting the Governor to create the first-in-the-nation strategy to eliminate hepatitis C, and the Mayor’s support to piloting safer consumption spaces across the city.

Overdose claims a life every eight minutes – that’s 200 people a day, 72,287 across the nation last year. That’s 10 percent more than in the previous year, and in the Black community, this crisis is even worse. Overdose deaths increased 41 percent in 2016, faster than for any other demographic. In many cities, overdose is the leading cause of death for people who are marginally housed and homeless.

Donald Trump’s response to the opioid epidemic has been two-faced. At the same time as he declares a “national health emergency,” he cuts back the services that save lives in nearly every state in the nation.

And even the ones who survive an opioid overdose because they received a life-saving dose of naloxone rarely receive follow-up counseling nor support services. People who received this medication during an overdose had a 1 in 10 chance of surviving the year, according to a national study.

Trump now wants the death penalty for drug dealers, as if he thinks a new “zero tolerance” policy will make him look tough on crime. This perpetuates the perception that people who use drugs are not worthy of life. 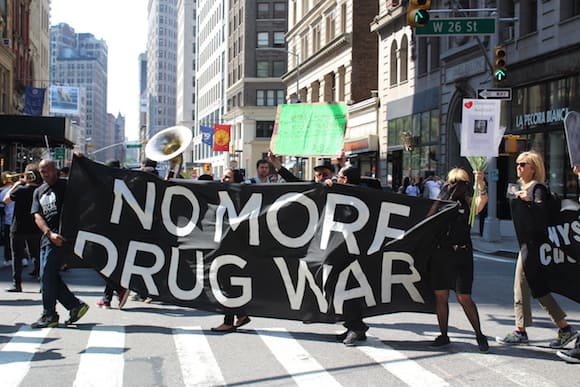 Let’s be clear: substance use disorder is a public health crisis, not a criminal one. There is no other public health issue our nation approaches with handcuffs or death sentences. And while elected officials acknowledge that we “can’t arrest our way out of this problem,” they continue to fall back on the tactics of the failed war on drugs.

At least 16 states have enacted supply-side laws increasing penalties for opioid use, and six of them have passed drug-induced homicide laws.

In New York City, funds from the Mayor’s initiative to combat the overdose crisis, HealingNYC have been allocated to the NYPD’s Overdose Response Squads, who investigate all overdoses - even non-fatal ones - as crime scenes.

Research consistently shows that neither increased arrests nor increased severity of criminal punishment for drug law violations results in less use (demand) or sales (supply), but instead exacerbates the issue.

Many of those who need recovery support the most are behind bars: more than 80 percent of people in New York’s state prisons are in need of substance use treatment, and about 10 percent are heroin users. We need to rapidly scale up low-threshold medication-assisted treatment (methadone and buprenorphine) in prisons and jails as this critical at reducing overdose risks. 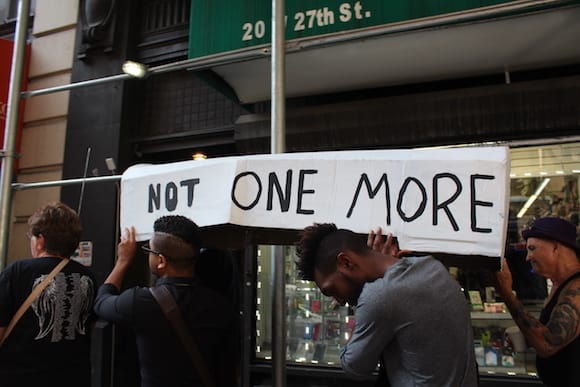 People are dying in public bathrooms, libraries, parks – and we could save these people--but someone has to be able to observe an overdose to reverse it. Safer consumption spaces are sterile, observed spaces that have existed for over 30 years across the world -there has never been a fatal overdose in the nearly 100 sites worldwide.

These safe spaces function under a harm reduction model, and are an entry point to treatment. Insite, Vancouver’s, first safer consumption space, saw a 30 percent increase of people entering treatment the first year of operation.

The good news is our nation’s overdose deaths can be prevented. The bad news our leaders lack the moral courage to enact the compassionate solutions we know will work.

Overdose is a public health issue, a human rights issue, and a social justice issue. Join us on August 31 as we gather, in the words of Mary “Mother Jones” Harris from a century ago, to “pray for the dead, and fight like hell for the living.”

Click HERE to find an event near you.  If you are New York City, click HERE to register for the march.  To learn about the End Overdose NY Platform click HERE.