The Constitution's Case for Impeachment

Millions of Americans sit helplessly by as an unfit, narcissistic, ignorant, pathologically lying, misogynistic, racist, xenophobic President allies himself with Russia and Putin against our government.

He does nothing to protect American elections against continued attacks from a hostile foreign adversary. He supports suppressing the votes of citizens who may oppose him, and attacks fundamental American and Constitutional values in a manner that may irreversibly damage our system of democracy.

This, and much more, adds up to a constitutional crisis.

Is there nothing that those who care about the survival of American values and democracy can do, but hope and pray that this manifestly unfit President is not reelected in 2020 or 2024, and that the United States, as we know it, survives until then?

The authors of a newly released book, The Constitution Demands It: The Case For The Impeachment, propose another solution: let Congress immediately begin impeachment hearings to determine whether President Trump has committed “high crimes and misdemeanors.”

Under the Constitution, they say, this would demand Trump's removal from office, and citizens should take whatever actions are within their power to get Congress to exercise its Constitutional authority. 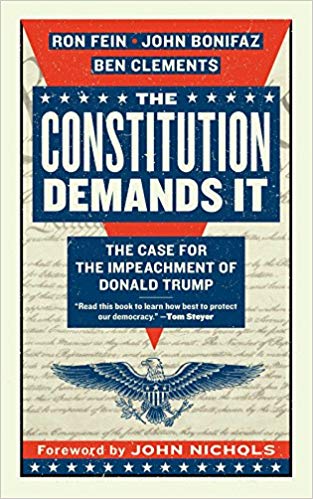 The first words of the foreword to the book summarize this case:

“Impeachment is not a constitutional crisis.

Impeachment is the cure for a constitutional crisis.”

The Case for Impeachment

The authors, Ron Fein, John Bonifaz and Ben Clements,  are all veteran Constitutional attorneys, and do not reach this conclusion lightly. Rather, they carefully examine Constitutional history, law, and politics to make a reasoned case that can be understood both by legal scholars and ordinary citizens.

The authors set forth in detail eight categories “where Trump has already crossed the line into impeachable territory, each of which could form the basis for a separate impeachment count”:

The first three counts are the most compelling. They make a prima facie case that Trump has already committed "high crimes and misdemeanors," based on publicly known information.

Some of the others, at least viewed in isolation, make a weaker case. For example, denigrating the free press may be dangerous and despicable, but absent concrete governmental action to actually suppress freedom of the press, it may not rise to the level of “high crimes and misdemeanors,” except, arguably, as part of a part of a pattern of misdeeds violating the public trust.

Impeachable Offenses Should Be Judged as a Whole

Beyond the specific eight impeachment counts proposed in the book (as well as other potential counts), the authors make two vital and more general points about the Constitutional grounds for impeachment and when they should be invoked.

First, while many dangerous acts and statements by Trump, taken in isolation, may not alone rise to the level of “high crimes and misdemeanors,” when taken together they form a “pattern that turn individually troubling acts into a dangerous abuse of office.”

Quoting one Constitutional scholar, the book argues that Articles of Impeachment do not require that “an official’s course of conduct must be divided into offenses and that each offence must be judged separately as to whether it is impeachable…It has been well understood that the official’s conduct as a whole should be the subject of judgment.”

Thus, it could be argued that no single one of Trump’s 4,229 lies, no single statement that Putin’s denials of Russian meddling are as credible as 18 US intelligence agency, no single attack on the freedom of the press, no individual attack on the legitimacy of the Mueller investigation, etc. rises to the level of a “high crime and misdemeanor.”  But taken together, they form a pattern of behavior constituting an abuse of power.

According to Alexander Hamilton, impeachable offenses arise from “the misconduct of public men, or in other words from the abuse or violation of some public trust…They relate chiefly to injuries done immediately to society itself.”

The House Judiciary Committee’s 1974 Report during the Nixon impeachment proceedings divided impeachable offences into three broad categories: (1) exceeding the constitutional bounds of the power of the office, in derogation of the powers of another branch of government; (2) behaving in a manner grossly incompatible with the proper function and purpose of the office; and (3) employing the power of the office for an improper purpose or for personal gain.

In the early 19th century,  Supreme Court Justice Joseph Story explained that high crimes and misdemeanors “reaches what are aptly termed political offenses, growing out of personal misconduct, or gross neglect, or usurpation, or habitual disregard of the public interest, in the discharge of political office,” whether or not they are breaches of the criminal code."

Viewed in this way, the Mueller investigation and a Congressional impeachment proceeding would serve different though overlapping purposes.

Mueller’s mandate is to investigate whether criminal violations of the Federal Code have been committed, and to punish them. Even if Trump did commit crimes, it is debatable whether he could be tried while still in office.

In contrast, the purpose of a Congressional impeachment investigation is to determine whether “high crimes and misdemeanors” in the Constitutional sense have been committed, regardless of whether or not they technically violate the Federal Code.

This is a much broader standard.  Its purpose is less to punish than to prevent and deter present and future abuses of the public trust by this and future Presidents.

It is therefore a political mistake for Democrats to leave the decision of whether impeachable offenses have been committed to Robert Mueller and his staff alone. Even if Mueller’s report were to find that Trump criminally broke the Federal Code, it would initially be up to Congress, not the courts, to decide what should happen to his Presidency.

The Silence of Both Democratic and Republican Leaders

Nevertheless, while impeachment may be discussed widely over Americans’ kitchen tables and summer barbecue grills, you’ll almost never hear the word “Impeachment” mentioned by Congressional leaders, whether Republican and Democratic.

Republican leaders are either silent about Trump’s misdeeds—so long as he cuts taxes on the wealthy, undermines environmental and financial regulation, and appoints hard-right judges—or actively join Trump in attacking the Russia investigation as a witch-hunt.

Meanwhile, Democratic Congressional leaders—headed by Nancy Pelosi and Chuck Schumer—are doing everything in their power to tamp down impeachment talk and to be sure that as few Democratic House and Senate candidates running in the fall allow the word to pass their lips. Their argument, apparently, is that if Democrats mention impeachment, it will rile up Trump’s base, making it more likely they will vote and prevent a Democratic victory. They seem more interested in mollifying Trump voters than in exciting their own potential supporters to go to the polls.

This is at best unprincipled and at worst constitutes political malpractice.

Would Impeachment Do More Harm Than Good?

A more academic argument against impeachment is made by liberal Harvard constitutional professor Laurence Tribe in his new book To End a Presidency (co-authored with Joshua Metz.), an argument that may give intellectual heft to Democratic leaders’ opposition to impeachment.

While slightly hedging their bets, Tribe and Metz generally agree that Trump has likely committed high crimes and misdemeanors that could justify impeachment, many of them similar to those listed by Fein, Bonifaz and Clements.

"There can be little doubt that a successful impeachment campaign would inflict enduring national trauma. For months or years, politics would shift from ordinary governance toward a grand inquest in the president’s alleged evil deeds…The resulting enmities, cynicism and disenchantment with democracy could persist for generations…An embattled president—or his opponents—might engage in acts of desperation that shatter norms, institutions, and the rule of law.”

Such dangers might look only prospective when sitting in the Ivy halls of Harvard. But in the real world, the dangers Tribe and Trump fear that impeachment hearings would cause are already happening. Under Trump, the nation is already “enduring national trauma. “ If you don’t think that politics has already shifted from ordinary governance into “a grand inquest over the president’s evil deeds,” just watch the nightly news. Moreover, there is a strong case that Trump’s continued Presidency will damage democracy for generations, if not forever. And Trump has already engaged  in numerous “acts that shatter norms, institutions, and the rule of law.”

As John Nichols writes in the Foreword to The Constitution Demands It,

“Misguided people who imagine that liberty and justice for all can long survive in a circumstance where a President places himself above the law fret about the political consequences of addressing a constitutional crisis with a constitutional remedy. They foolishly imagine that it is better to wait a lawless presidency out, with faint hope for better results on some distant election day. They refuse to recognize that each failure to demand necessary accountability invites greater abuses and diminishes the prospect that accountability will ever be achieved.”

The Constitution Demands It makes a powerful case that Donald Trump has committed numerous impeachable offenses, individually and in the aggregate, and that failure to act endangers the future of American democracy.

If our political leaders will not take up this call, then it must come from the people.