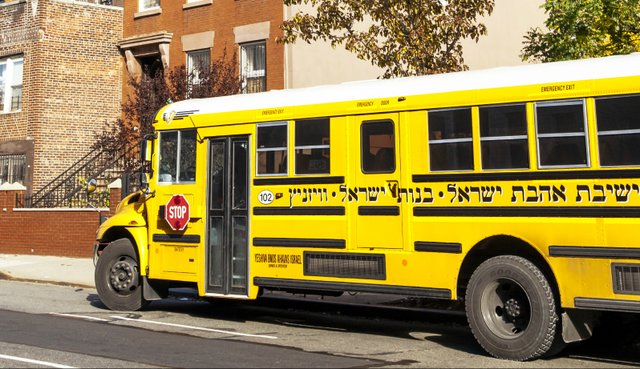 While fourteen states allow tax dollars to fund religious school vouchers, thirty-seven state constitutions contain Blaine Amendments, limiting state funding to religious schools. Many states have enacted policies that contravene or chip away at the Blaine protections, to the delight of DeVos, who has urged such restrictions be “assigned to the ash heap of history.”

Nowhere is this more evident than New York, as a bitter dispute has escalated over the lack of academic instruction offered by yeshivas, which accept state funding but reject state education laws. DeVos came to New York to court the monolithic ultra-Orthodox vote. She is also backstopping a single state senator, Simcha Felder, who alone has tilted the balance of power toward public funding of religious education in the state.

Should DeVos and other “school choice” advocates get their wish, New York’s experience with yeshivas may portend what is to come as public education budgets are hijacked to fund private religious schools in many more places.

Over the last few years, former students and parents have gone public to expose yeshivas that do not provide required secular studies. This includes basic English instruction. Generations of children who attend these schools were born and raised in New York, yet only speak Yiddish.

Preventing children from learning to fully assimilate, speak English, or attend college helps religious leaders and educators keep their rapidly growing community close to home. The nonprofit Young Advocates for Fair Education, or Yaffed, has led the campaign encouraging whistleblowers to step out of the shadows.

Also emerging from the debate are shocking demographic statistics, with insular Hasidic communities in Rockland County qualifying as the poorest in the state with poverty rates over 70 percent, and others in Orange County close behind. With a general poverty rate of 15.4 percent statewide, census data show approximately 43 percent of Hasidic households in poverty, with greater percentages receiving cash assistance, food stamps, public health care, and Section 8 housing. These trends owe to extremely large family sizes, a tradition of young marriage, and a distinct lack of marketable skills.

Because so many yeshivas do not “register” with New York state, they do not issueofficial high school diplomas or offer Regents exams. In Rockland County, only about23 percent of boys and 42 percent of girls in Jewish religious schools are eligible to graduate with state-recognized diplomas, compared to about 94 percent in other nonpublic schools.The projections for growth in the ultra Orthodox community have also stirred concerns over economic sustainability, infrastructure, housing density, and overdevelopment.

New York Attorney General Eric Schneiderman, who resigned last May amid misconduct revelations, was regularly apprised of the non-compliance in the yeshivas, as were his deputies in the civil rights division and public integrity bureau, to no avail.

A long-promised investigation by New York City mayor Bill de Blasio has suspiciously stalled out. Asked about the controversy, New York City Comptroller Scott Stringer advised advocates to press the mayor to complete the investigation as only sixteen of thirty-nine yeshivas have been investigated in almost three years.

State education law says non-public schools receiving public funding must offer academic instruction that is “substantially equivalent” to public schools. Religious groups have applied political pressure to convince officials to ignore the law, using campaign cash and public relations to deflect from the basic legal question, for example saying parents have a right to choose religious instruction for their children.

Such is the power and influence of the Orthodox Jewish bloc, represented ably by the national organization Agudath Israel. New York City councilman Daniel Dromm, who chaired the education committee for years, recently noted that no one with statewide political aspirations dares to cross this constituency.

Many from the community have observed that parents and students want the secular studies but face heavy social pressure to not make waves and stay in the school associated with their particular sect. Naftuli Moster, the founder and executive director of Yaffed, has been subjected to public smears, intimidation and even death threats as his organization has worked to garner attention to the issue.

The politics that enable New York’s radical yeshivas trace back to manipulative redistricting in 2011. Empowered by a group of breakaway Democrats, Republicans created a state senate district in Brooklyn sometimes referred to as the Jewish “super-district” because it is so densely populated with Orthodox, ultra-Orthodox, and Hasidic Jews. This led to the election of a not-so-loyal Democrat, state senator Simcha Felder, who used his pivotal position in an evenly divided senate to hand control to the Republicans.

East Ramapo, a school district in the New York City suburbs, has about 8,500 students in public schools and almost 28,000 in private Jewish religious schools. The ultra-Orthodox community won a majority on the school board in 2005, and began to defund public schools. Layoffs followed, with deep cuts to arts, sports, clubs and high school electives. They even eliminated kindergarten classes mid-year, leaving the predominantly minority public school parents in the lurch.

Worse still, the school board began closing schools and selling the property to the yeshiva network. One public school was closed and offered for sale to a yeshiva group at millions under market value, prompting an investigation from the office of Attorney General Schneiderman.

The story of the East Ramapo school board includes years of contentious votes, protests, scandals and lawsuits, chronicled thoughtfully in 2014 by the public radio program This American Life. But the adversity continued, by 2015 resulting in the appointment of state monitors and new oversight duties for the state education commissioner.

But the monitors had their veto power stripped away in legislative wrangling, and in 2017, state education commissioner MaryEllen Elia doled out millions in taxpayer dollars for non-mandated religious school transportation in exchange for baseline budget approvals.

Earlier this month, however, East Ramapo voters failed to pass a school district budget, meaning the district will be run on a contingency budget for the next school year and again face “dire” cuts.

Commissioner Elia has drafted guidelines for curriculum compliance that have angered the yeshivas. Sensing that Elia is poised to impose new enforcement regulations, the Orthodox bloc called in favors. Last April, Senator Felder again leveraged his one decisive vote to hold the budget vote hostage at the last second, demanding a carve-out of the education rules for yeshivas. The incident generated statewide and national attention, exemplified by a series of revealing videos released by Fox News.

In the final days of the 2018 legislative session, New York state senate majority leader, Republican John Flanagan (who ostensibly owes his leadership position to Simcha Felder), proposed a bill that would to strip authority away from the Commissioner in favor of “local control,” making the state defer to “curriculum experts” familiar with the yeshivas unique brand of instruction.

Predictably, the bill was considered “dead on arrival” in the Democratic-led state assembly and never got a vote, so the session ended without resolving the issue. Democrats seem confident they can take back the state senate in November, in which case Felder has sold his tie-breaking vote for the last time.

But Betsy DeVos’s visit made clear her strong bias for religious schools. Under her leadership, the Trump Administration seeks less government oversight for private religious schools, perfectly content to deny fundamental courses like social studies, science, history, civics, physical education, health and geography to students who invariably grow up to bloc-vote in lockstep behind their religious leaders.

First published at The Progressive