Immediately after Betsy DeVos took over as U.S. Secretary of Education, numerous education policy experts expressed doubts she'd have much success in enacting her well-documented agenda to impose her brand of Christian religion on public schools and direct more public money to private religious schools. 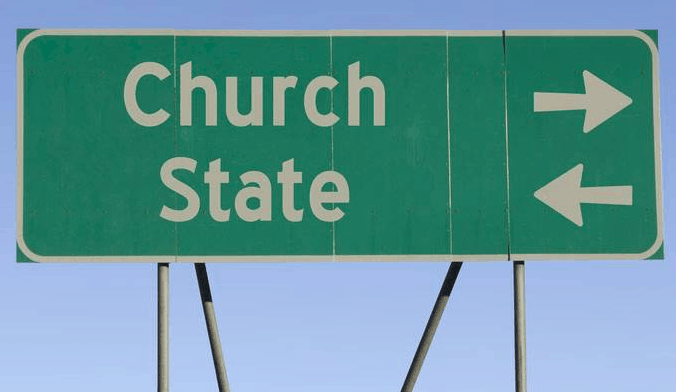 President Trump's nomination of Brett Kavanaugh to the Supreme Court, however, is yet another indicator that DeVos's detractors were wrong, as he would surely support a legal pathway to what DeVos wants.

"In private practice, Kavanaugh backed the government when it sought to support religious interests and challenged schools when they attempted to exclude religious groups," the Washington Post reports, citing his defense of student-led prayers at high school football games and a religious school club from being barred by school administrators.

In tracing a potential legal pathway from taxpayer money for school prayer and religious clubs to "more sweeping voucher programs," the Post reporter points to a narrow ruling from the court last year, in Trinity Lutheran Church v. Comer, that said denying a church-affiliated preschool from receiving a general public benefit, in this case funding for playground resurfacing, violates constitutional protections for the free exercise of religion.

But Kavanaugh's support of the DeVos agenda for school vouchers and religious education goes way beyond that narrow ruling, and it relies on a bizarre, but long-held view of conservative jurists.

As the son of a public-school teacher and a volunteer tutor of students in Washington, D.C., Kavanaugh's public persona may come across as friendly to public schools, but Kavanaugh was raised in elite private schools and has nothing in his record that would indicate a strong support for public education.

His history of legally undermining the separation of church and state is a fact not in dispute. In his work with the Federalist Society – the rightwing project that has largely engineered today's high court and compiled the list of potential nominees for Trump – Kavanaugh has led its "School Choice Practice Group" and "Religious Liberties Group." These groups help the Federalist Society craft its legal arguments on the unconstitutionality of excluding religious options from school choice programs.

Among the primary targets for these groups is to repeal amendments in 39 state constitutions that prohibit direct government aid to educational institutions that have a religious affiliation. This argument already has the Supreme Court's partial consent, given its ruling last year that ordered a New Mexico Supreme Court to reconsider a decision barring religious schools from a state textbook lending program.

Kavanaugh also has a history of supporting school vouchers that allow parents to use public taxdollars to pay tuition for private, religious schools. In 2000, he represented then Florida Governor Jeb Bush to push through the state's first school voucher program, which was eventually struck down by the Florida Supreme Court in a 2006 decision.

But just as Kavanaugh and his conservative colleagues were being stymied in state courts, they were blazing a legal pathway for federal support of school vouchers.

In an appearance on CNN in 2000, Politico reports, Kavanaugh "predicted… that school vouchers would one day be upheld by the Court."

His comment was in reference to a Supreme Court ruling that year, Mitchell v. Helms, which challenged a federal program that provided all schools, both public and private, with instructional materials and equipment, including computers and film projectors. The split decision to uphold the program was extremely narrow, with some judges tipping the scale in favor deciding that the federal government can provide secular aid to any institution as long as the aid was used strictly for secular activities – presumably, using computers, even when they are helping to operate a religious program, and running film projectors, even when they are showing religious movies.

Defining education-related activities as essentially "secular" provided conservative jurists a huge loophole to use in later rulings to advance religion in public education.

Another narrow decision by the Court in 2002, Zelman v. Simmons-Harris, upheld an Ohio program that gave school vouchers to low-income families even if they used the vouchers to send their children to private, religious schools. In that ruling, the late Chief Justice William Rehnquist argued that in this instance government support for private religious schools was "religiously neutral" because the program was based on the economic means of the student and on the geographic location of the family. The fact vouchers were restricted to low-income children in the district made them "secular."

"The Ohio [voucher] program is entirely neutral with respect to religion," Rehnquist argued. "It provides benefits directly to a wide spectrum of individuals, defined only by financial need and residence in a particular school district. It permits such individuals to exercise genuine choice among options public and private, secular and religious. The program is therefore a program of true private choice."

While Rehnquist was arguing that private funding for religious schools could be religiously neutral and subject to private choice, he was also asserting in other cases that institutional support for religious advocacy in public schools was also a private, neutral activity and thus allowable under the Constitution.

in a paper for the American Enterprise Institute, Kavanaugh praises Rehnquist's reasoning.

Among the cases where Kavanaugh took Rehnquist's side, Lee v. Weisman and Santa Fe Independent School District v. Doe, court majorities ruled there was clear evidence that when the assets and staff of a school are behind organized prayer activities, then schools are overstepping their boundaries and using public funds to promote religion. Rehnquist sided with the dissent in each case, according to Kavanaugh, arguing against a "strict wall of separation between church and state" and against court precedents that "cordon off public schools from state-sponsored religious prayer."

Kavanaugh praises Rehnquist for having "had much more success in ensuring that religious schools and religious institutions could participate as equals in society and in state benefits programs, receiving funding or benefits from the state so long as the funding was pursuant to a neutral program."

Kavanaugh's argument that religious expression in education settings is somehow neutral occurs again in in a speech to the American Enterprise Institute last year. According to a report by the group Americans United for Separation of Church and State, Kavanaugh argued that “'religious schools and religious institutions' should be able to 'receiv[e] funding or benefits from the state so long as the funding [i]s pursuant to a neutral program that, among other things, include[s] religious and nonreligious institutions alike.'”

Given this line of reasoning, Kavanaugh might agree that a program funding textbooks in schools would be "neutral," even if the textbooks used in the religious schools taught a version of history that says "the majority of slave holders treated their slaves well" or a version of science that says humans and dinosaurs lived together.

Certainly, the fundamental principle that public money should not be used to advocate religious beliefs in a public school is already at risk.

There are voucher programs in 15 states and the District of Columbia that allow parents to use taxpayer money to pay for tuition at private, religious schools, according to a report by the Network for Public Education. Other states have created school tax credit programs and education savings account programs that are voucher-like but set up differently to deliberately get around the issue of state funding going directly to religious schools.

Each of those programs has been approved along very narrow lines either on the basis of what is allowed in state constitutions, or similar to legal precedent established by the Supreme Court.

But the slippery slope conservatives have been plotting for decades leads inexorably to what Secretary DeVos wants.

In her advocacy for education reform as a way to "advance God's kingdom," DeVos envisions a greater presence for religion – the Christian religion – in public schools.

In her advocacy for school vouchers, DeVos compares education to a consumer good – a commodity that is neutral – and a matter determined strictly by "parent choice" and not public governance, even when the public has to pay for it.

Should Kavanaugh be confirmed, which is what is expected, DeVos is far more apt to have a Supreme Court that agrees with her.