The Future of "American" Is Up To Us

We should be skeptical of the motivation and messengers behind calls for civility.

We hear people say that what is happening to migrants in the United States right now is un-American. I wish that were true. Sadly, American history is full of periods where children of color were routinely taken from their parents. Resistance and organizing, on the other hand, are truly American. In fact, many of our nation’s best moments have been when we heeded the call to stand down hatred and racism. 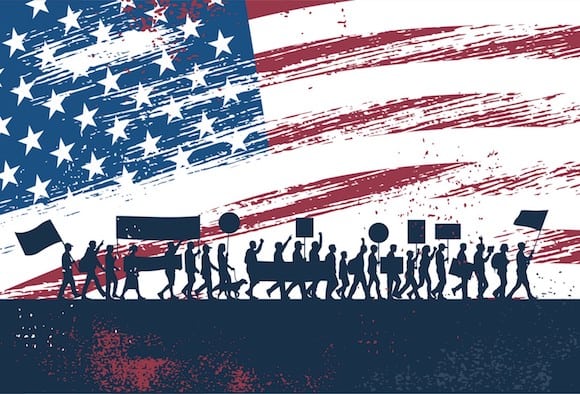 The Trump Administration has been off the rails since day one. But Donald Trump’s zero tolerance policy of arresting and detaining families seeking asylum in the US is a new kind of off the rails. History tells us in crises like these, if we do not stand up together in mass and say — no, yell: ‘this has to stop!’ — it will undoubtedly be a long and ugly haul to get back on track.

From the genocide of Native Americans to Slavery to Japanese internment camps, there is a well-documented history of forced separation, detention, and enslavement of people of color in the United States. Wreaking irreparable harm to indigenous, African-American, Asian-American, Latinx children is, sadly, a through-line in the American story.

But that does not have to be the America we are building. The future of “American” is up to us.

The America many of us want to build is one where all people have what we need to reach our highest human potential. An America that takes care of who is here now, has addressed sins of the past, and is welcoming of those to come. This would be an America that more fully lives up to the ideals of a beacon of democracy and land of opportunity.

As we create the tension needed to strive toward these ideals, there will be calls for civility. Merriam Webster dictionary describes “civil” as “ adequate in courtesy and politeness”. One of my organizing mentors, Shel Trap, said the “be nice rule” was really the “be nice to those in power rule.” It tells us to go through the formal channels to have your concerns addressed. Stand in line to file your complaint, submit your grievance in writing, wait patiently for the conclusions of the committee created to study the problem. Channels that were designed to wear down dissent and enforce subordination.

It’s easy to call for civility when you are doling out inhumane policy under the cloak of the law. I doubt the power structures that sought to enforce segregation, bust unions, or restrict voting rights would call the actions on the part of the movements that countered them “civil”. Count me among the thankful that these movements resisted such calls. This history of resistance continued last Saturday as 780 Families Belong Together marches and rallies were organized, and dozens more that led to protestors being arrested. Clearly millions of Americans find the President’s zero tolerance policy to be anything but civil and are responding accordingly.

The news of the day can be demoralizing and sap energy and hope from each of us: the Supreme Court upholding the Muslim Ban, the killing of Antwon Rose by a police officer, family separation at the border, Justice Kennedy’s retirement. Each another punch in the gut.

Before his execution, the labor organizer and songster Joe Hill famously said, “don’t mourn, but organize”. I think it’s ok to mourn. It’s human and we will fall apart without acknowledging the pain and disappointment we are experiencing. Some of us may need to rest and sit one out. At the same time others can say put me in coach, I’m ready to march. To risk arrest. To organize to elect candidates who want to create a country where when egregious events happen we can truly say “this is un-American”. And it will actually be true.