Our Liberty Is Bound Together

Robert Suarez delivers these remarks on behalf of the  VOCAL-NY Action Fund at We The People, a forum of over a thousand activists from across the country with elected officials in Washington, D.C. on June 13, 2018.

I want share a quote from Lilla Watson that many of you will know: “If you have come here to help me, you are wasting your time. But if you have come because your liberation is bound up with mine, then let us work together.” 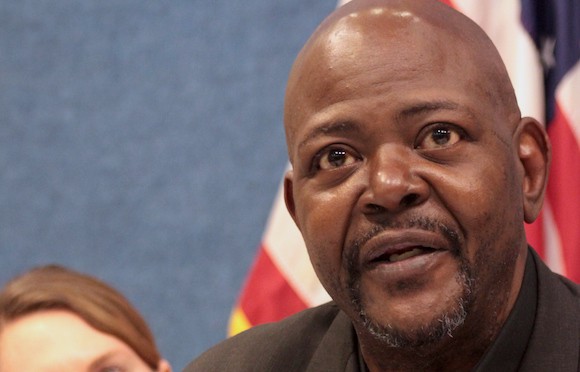 My name is Robert Suarez, and I'm a leader of VOCAL New York. I’ve come to Washington, D.C. to represent People’s Action with critical questions on healthcare and our nation’s overdose crisis. I lost my mother to the AIDS epidemic. She died in my arms. The reason? She contracted HIV through injecting drug use before syringe exchange was legal. Then she died due to inadequate healthcare.

This, and other struggles, would lead me to becoming homeless. I lived under bridges. I was offered a jail cell, instead of care when I was struggling with drug use.

I want to be clear about something: it was not drugs or HIV that killed my mother. It was a government that refused to support a proven public health intervention like syringe exchange, then refused to provide her quality care to her. It was not drugs that put me behind bars, or left me homeless. It was a political system that promotes incarceration over care!

My story is a painful one, but it is one shared by people across this country. And while racism is what drove many of these tragedies in my life, I will stand with any community, any family and any person who believes their liberation is bound up with mine.

I lost my mother because of a racist healthcare system, and due to doctors who stigmatized people who used drugs. But if you are one of the millions across this nation – whether you are white, black or brown; gay, straight or trans – who have been denied the human right to quality healthcare, then I believe my liberation is bound up with yours!

Overdose has long plagued my community; it could have taken me. Instead of help, we were offered prison cells, while politicians ignored public health approaches that could have saved tens of thousands of lives.

But if you are one of the many in rural or smalltown America who have become victim to the opioid crisis, and whose politicians now ignore these same public health programs, then I want my liberation bound up with yours!

If you believe my Black life matters, if you believe in Trans Justice, and if you believe immigrants and refugees are welcome here, then I – and millions more across the country – are ready for our liberation to be bound together, in this fight to win the basic human right to healthcare, and an end to the failed war on drugs that has only made our country a global leader in incarceration and in overdose deaths!

Last year, People’s Action affiliates held over 800 actions across the country to defend the Affordable Care Act, and to expand access to healthcare. I stand with these courageous activists to demand that we achieve universal health care that is accessible and affordable for all, and addresses the glaring racial disparities that are codified in our current health care system.

The War on Drugs is nothing more than a war on people, which has made our country a global leader in incarceration and overdose deaths. I demand that we replace our failed drug war policies with policies grounded in public health and compassion, and comprehensive legislation – like the CARE Act (introduced by Senator Warren and Congressman Cummings) – that would provide $100 million in funding over 10 years and put decision making power into the hands of the people who are directly impacted.

Standing In The Light

I have personally come from a place that was very dark - and now stand in what I like to think of as the light. People’s Action has given me a renewed hope - to know that there are so many others around the country who are doing work, whether it’s working for health care, farmer’s rights, an end to racial discrimination, to make sure women aren’t abused in the workplace, clean energy, issues that affect us all.

People have a right to fight for what they believe in: at VOCAL, one of the things we do is work on the ground around those issues that impact people – human beings.

For the longest time, I think We The People fell asleep at the wheel, over decades and decades. We were just giving up our rights, giving up our power.

But now we are at the cusp of taking back our power: white, Black, people of all colors are coming together, moving forward. The division is no longer there. And we’re letting our elected officials know that we’re seeing through it. And we’re no longer allowing it to happen.