NC Teachers Shout 'Listen to Us!' to Lawmakers

Teachers in North Carolina made a huge statement when they shut down schools in at least 42 districts and thronged the state capital in an all-day march and rally that drew an estimated 20,000 to 30,000 people – way more than the 15,000 the state teachers' association, that organized the event, promised. 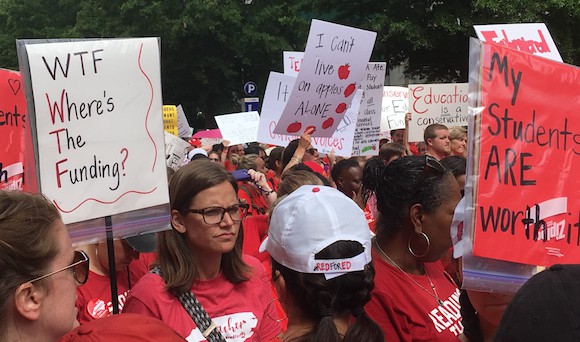 While their list of grievances was long and varied – from unmanageable class sizes to inadequate funding to stressed out work schedules – there was one theme that recurred when asked to explain what they hoped to accomplish.

"We hope our state legislators listen to us," said Courtney Brown, a teacher at River Bend Elementary School in Wake County. "They need to understand there's a problem, and things need to change."

The "problem" teachers want to call attention to takes on many forms in their schools, depending on where the teachers work.

The Problems Only Teachers See

"While [lawmakers] underfunded resources for our students, cut resource personnel [such as reading assistants and special education teachers], and taken away longevity pay and other salary incentives for teachers, they've put more emphasis on charter schools and vouchers," she said. 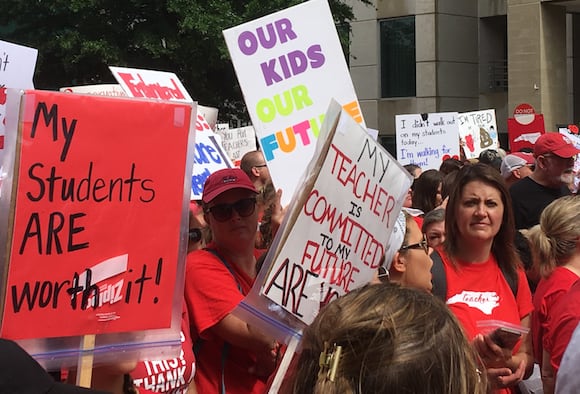 Other Wake County teachers offered a long list of complaints, including the loss of reading support teachers and outdated text books. "They tell us to let the kids use their own devices [smart phones or tablets], but in my school there are lots of children too poor to own their own device."

"This is not about our salaries," another Wake teacher told me. "Increasing our salary is on the bottom of my list."

"There's no funding for pencils, paper, or art supplies in my classroom," said Jennifer Miske, a teacher at Rogers-Herr Middle School. "I'm always spending my own money for these things." Tar Heel teachers typically spend $500 - $1,000 of their own money for classroom supplies their students need.

Her Durham County colleagues complained of out-of-date textbooks and aging, dirty school buildings that are no longer welcoming, or even safe, for children. "Sure, we could use a pay raise," one said, "but our students come first."

A group of teachers from Bunkum County and Ashville City schools, in the western part of the state, also talked of crumbling textbooks – the history books teach that Bill Clinton is president. State funding for textbooks has been slashed for the past four years.

Over-testing of students is also an issue for these teachers, especially in the elementary grades where third-graders are made to take as many as 17 assessments throughout the schoolyear.

A group of teachers from Orange County talked about, not only the inadequacy of school funding, but the inequity too. "I've taught in two districts," one said, "one where there were no supplies, no technology for kids, and roach-infested, disgusting buildings, and one where we had what we needed for students. That's not fair to kids."

With exam season under say, these teachers also complained about the battery of required standardized tests their student have to take. "At least three of my students cry every day," one teacher stated. As a special education teacher, she is assigned students who are most apt to struggle on the exams, yet she is evaluated based in part on how her students perform on the tests. "It's demoralizing to the kids because they feel like failures. And It's unfair to me."

"The teachers at my school are the hardest working I've ever seen, but they're too stressed out," said Swansboro Middle School teacher Kim Caister, a veteran who has "taught all over the world." She described harsh working conditions – including long hours, inadequate support personnel, and outdated, inadequate instructional materials and school facilities – that negatively affect teachers, which in turn, impact students.

Her Onslow County colleagues also complained about state lawmakers taking away long-term contracts [commonly called tenure] and the salary supplement teachers get for earning their Masters' Degree. These incentives were taken away by the state legislature in 2014. The teachers pointed out that losing these incentives has made it more attractive for teachers to seek work in Virginia, which drains their schools of the most capable and qualified teachers.

"We need more and better staffing, like nurses, counselors, and other support personnel," a group of Chatham County teachers said. (Many teachers preferred to speak in solidarity with their colleagues rather than have their names reported.) "We need to have our teacher assistants back." State funding for teacher assistants was cut in 2008 and has not been fully restored since.

But in reporting about the teacher action in North Carolina, and elsewhere, it's far too easy to get caught up in the flurry of specific issues with salaries, and pensions, and per-pupil expenditures, and forget what teachers say matters most: to "listen to us."

What Teachers Want Most

"We're here to open up a dialogue people haven't been wanting to have," Molly Wright, told me. Wright, a teacher at Millbrook High School, also in Wake County, is a second-generation teacher whose mother, a teacher in Forsyth County schools, accompanied her to the march. Wright explained, with a group of teachers around her nodding in approval, that nothing about what teachers were saying at the rally was new. What was new was that teachers had finally decided to go to drastic measures to make themselves heard.

"We had to close schools and disrupt people's lives for them to pay attention," she said. "We're hoping to take the momentum we're building here today and carry it over the summer and into November." 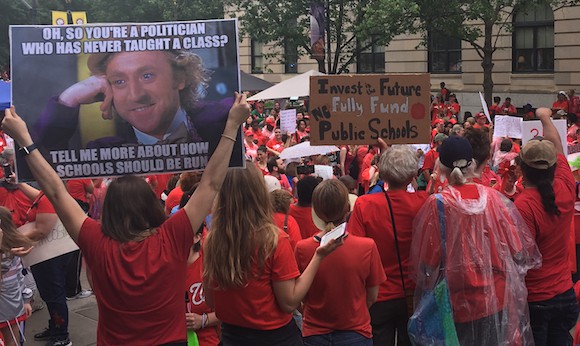 What Does It Take?

Why does it take shutting down thousands of schools and inconveniencing millions of families to get political leaders' attention? What is this "dialogue people haven't been wanting to have"?

The gap between what goes on in schools and what gets decided in state capitals and Washington, DC has gotten way too wide.

For years, it's been too easy for politicians to ignore teachers because teachers, by the very nature of their work, are discouraged from expressing their anger and sticking up for themselves.

Political leaders instead have relied on a very vocal and powerful faction of elite voices who created an education policy dialgue floating in a bubble far above the real lives of teachers. Instead of talking about what students need, they've focused on making teachers more "accountable." Instead of emphasizing funding, they've called for "reform."

The truth is people who've been deciding education policy have forgotten we live in a democracy. Teachers in North Carolina, and elsewhere, are reminding us of that.

Using the hashtags #Rally4Respect and "ItsPersonal, NC teachers were determined to raise the message that their voices need to be heard.

Many of the grievances they brought to the rally have been years in the making, a group of teachers from Gaston, Alamance, and Orange counties told me. But they've never believed they've had much power to change their circumstances. Until now.

"I've been teaching for 19 years," one said, "and today feels, for the first time, like we have some power."