With a little-noticed remark at a friendly event, Treasury Secretary Steven Mnuchin discarded his past arguments for the Trump/GOP tax bill. All Mnuchin could offer in their place was one of the oldest and most discredited ideas in the conservative playbook (and that’s saying something).

It was a startlingly cynical move, even for the preternaturally cynical gaggle of gold-plated grifters running our government – a crowd whose sole ambition is the single-minded pursuit of additional wealth for themselves and their fellow Gilded Age grandees. 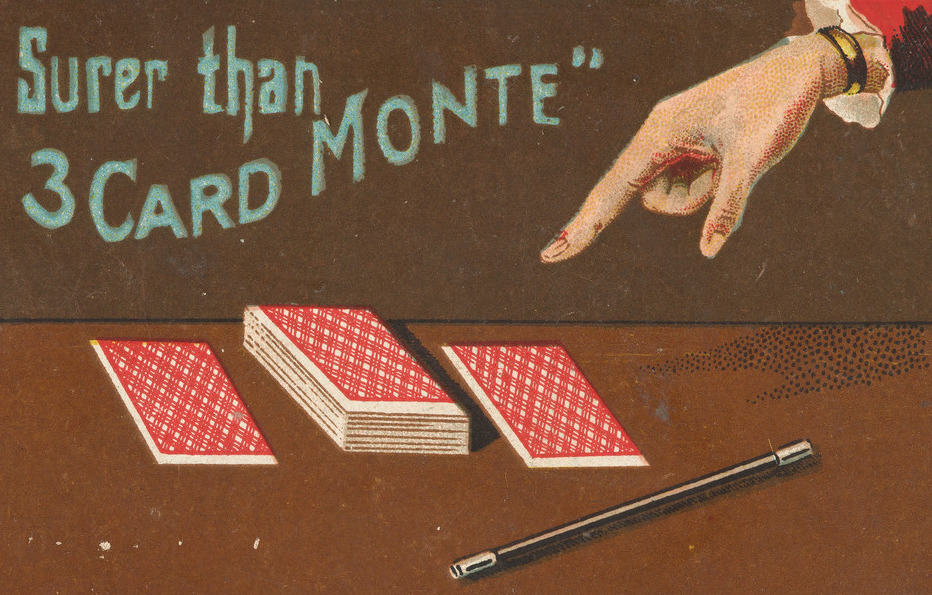 When the final taxonomy of these Trump Era swamp creatures is conducted, a special category will be reserved for Mnuchin, the Goldman Sachs banker turned Treasury Secretary who took a leading role in selling the Trump/GOP tax scam to the American people. His rule seems to be: If they don’t believe one lie, tell another.

From the tax bill's name - the "Tax Cuts and Jobs Act" - to the arguments made in its favor, the bill has been a three-card monte played on middle-class Americans.

This revamp of this age-old streetcorner scam was devised by Trump, in collaboration with GOP congressional leaders Mitch McConnell and Paul Ryan, but Steve Mnuchin was the pitchman holding the bets and fast-talking the crowd.

To sell the tax cut, Trump, Mnuchin and Congressional Republicans insisted that most of the bill's benefits would go to the middle class, which is demonstrably untrue. In fact, lower-income and middle-class Americans lose needed benefits and will eventually pay more in taxes than they did before the bill was passed.

Mnuchin, like his boss and his boss's cronies, also insisted that the bill's massive tax corporate cuts would lead to worker bonuses and new jobs as corporations reinvested their new-found billions.

He told these fibs, not just once, but over and over, even after the bill became law. Some examples:

The President outlined a framework with Congress that will... (fuel) job creation, higher wages, and economic growth ...  Indiana is a great example of how tax relief and reforms like these can lead to record-high employment, more investment in education and innovation, and more manufacturing right here in America.

We are working with Congress to pass historic tax relief and reform that will invigorate American manufacturing and ensure that the many truckers who attended the President's speech today will have plenty of American-made goods to deliver to every corner of our nation.

With a tax code made for Americans, we will see much more ‘Made in America.’

Today Congress delivered tax cuts to middle-income families and a level playing field for American businesses.  I congratulate the House and Senate for passing this historic legislation, which will usher in higher wages and more jobs for American workers...

To date, over one million American workers and counting are receiving special bonuses in response to President Trump signing the Tax Cuts & Jobs Act.  Many other middle-income families are seeing their wages increased, and companies across the country are announcing additional hiring and workforce investments.

Hardworking men and women across the country ... are receiving bonuses, higher wages, new jobs, and enhanced benefits thanks to tax reform.

Many of the bonuses touted by the Trump Administration were largely "optics," in one observer's words. That's putting it generously. And corporations were never planning to invest their tax breaks. A gathering of corporate CEOs pretty much told Trump economic advisor Gary Cohn as much last November.

Instead, as with past packages of cuts, many corporations are using their tax windfalls not to create jobs or invest in growth, but to conduct stock buybacks that create additional wealth for their investors but leave everyone else behind.

Apple, for example, is conducting a $100 billion buyback that will add 16 percent to its quarterly dividend. That means more money for its shareholders, not more jobs or pay for American workers. For perspective, Apple's buyback is roughly 50 percent larger than the Department of Education's entire 2018 budget of $68.3 billion.

Stock buybacks were considered illegal for most of the twentieth century, because they are commonly used to manipulate share prices.

Under Ronald Reagan, the SEC loosened the rules and made the practice legal - but that didn't make it right. As executive packages tilted more toward stock-based compensation, executives had a powerful incentive to abuse the process for personal gain.

The wave of stock buybacks triggered by the "Tax and Jobs Act" was, therefore, highly predictable. One assumes, in fact, that savvy bankers like Mnuchin expected it - and that this wave of wealth-taking at the public's expense was, in fact, their goal all along.

The tax bill is best understood another step in the class war being waged by the wealthy on working Americans. Most of its tax savings go to the wealthy (all of them, in the long term). The shareholder gains it has triggered also primarily benefit the wealthiest Americans. A Gallup survey found that nine out of ten families earning $100,000 or more owned stocks, while only one in five of those making $30,000 or less did (largely through 401-k's and other employer-based plans). And the top 1 percent owns most of the shares: 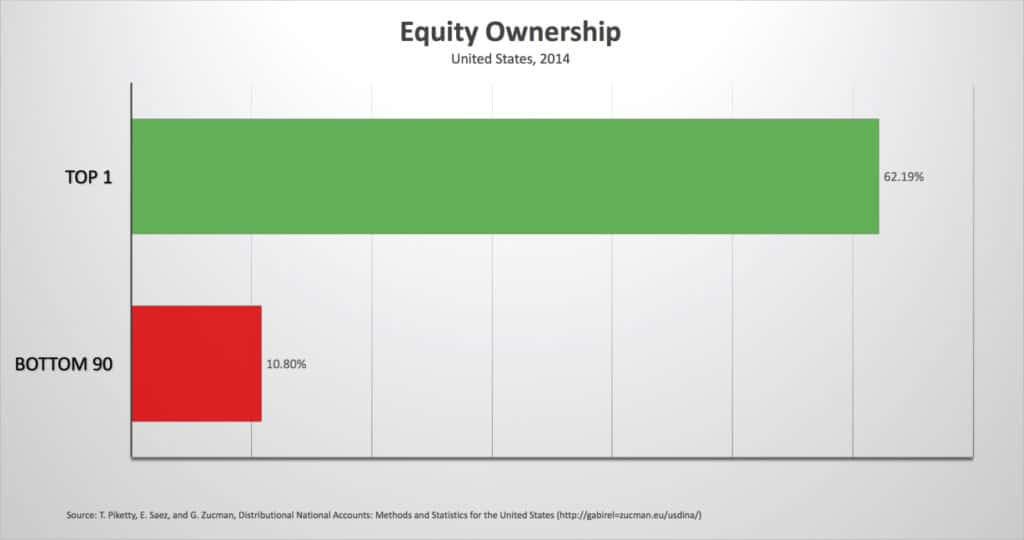 Faced with mounting evidence of this eminently predictable wave of wealth consolidation, Mnuchin apparently decided the time had come to change his story.

Days before embarking on a trade trip to China, Mnuchin appeared before a friendly audience in Beverly Hills at the Milken Institute Global Conference, where television personality Maria Bartiromo largely lobbed softball questions.

Bartiromo did, however, raise the issue of stock buybacks (at about the one-hour mark in this video), saying:

... (y)es, we've got all of those bonuses [not true--see above], but (corporations are) buying back a lot of stock and not necessarily hiring all the people that perhaps we thought. Is that a fair statement?

"No," responded Mnuchin, who continued:

In other words: This tax giveaway to corporations was "excess capital” - that is, they didn't need the money - so they’re giving it back to shareholders. But "that's not a bad thing," according to Mnuchin, because the largely wealthy shareholders who get that money will spend it and the economy will benefit.

If that argument sounds familiar, it should. It's the same old "trickle-down economics" Republicans have been foisting on the American people for decades. It has never worked, and it never will.

Trump and Mnuchin didn't use the "trickle-down" argument to sell this bill, because they know nobody believes it anymore. Instead, they argued that businesses would use this money for investment. That was easily disproved, because businesses were already hoarding a record $1.9 trillion in cash.

As Standard & Poor's SPC Global division notes, this cash hoard is disproportionately held by the largest corporations (who are also the largest beneficiaries of the GOP tax law). "Wealth inequality in the U.S. isn't just for individuals," says SPC Global, "the divide between the haves and the have-nots continues to widen for American companies too."

The group also predicts that the tax law will have some negative rating consequences for companies as they repatriate offshore holdings and give them away to shareholders.

Apple had the biggest cash pile of any corporation, at $261.5 billion. Now it has announced the largest stock buyback in history. Again: Nothing about this outcome was unpredictable.

Since these corporations were already sitting on large cash stockpiles, it was never reasonable to expect them to invest their new windfalls.  They were always going to give the money back to shareholders -- a group that includes the executives and board members tasked with deciding how to spend the money.

When confronted with the reality of stock buybacks, even by a gentle interviewer in front of a friendly audience, Mnuchin has no response to offer except an old and discredited idea. He had no choice but to discard his now-discredited arguments, toss out a stale right-wing myth in their place, and hope nobody would notice.

Meanwhile, he and his cronies are on track to win twice – with tax cuts and stock payouts that benefit the wealthiest among us – while most Americans are destined to lose.

That's what happens under a government of grifters.