Time’s up, Wells Fargo! It’s time for an end to profits from shady lending, supporting the gun lobby and fossil fuels, trampling the rights of Native communities, unsuspecting borrowers and the environment. 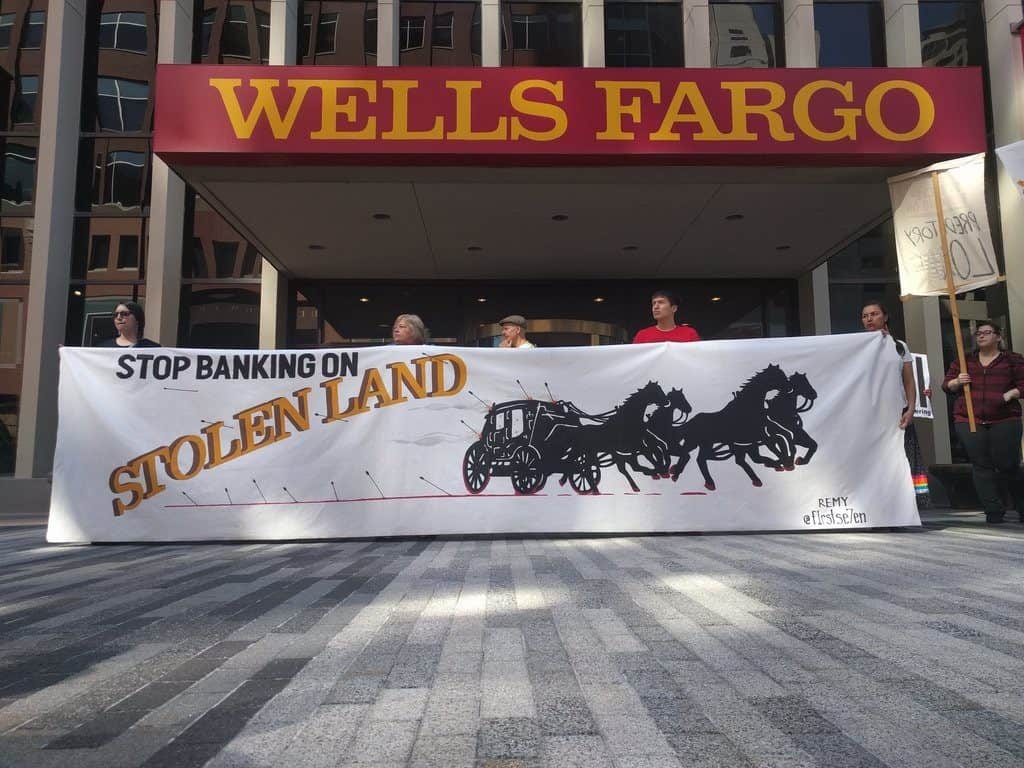 I was one of the hundreds of organizers who traveled to Des Moines, Iowa from all across the country to deliver this message to the bank’s executives at their annual shareholders’ meeting.

The protest, led by People’s Action, brought together activists from all walks of life and partner organizations, including the Communications Workers of America (CWA), the Sierra Club and the Action Center on Race & the Economy (ACRE). Iowa Citizens for Community Improvement (CCI), a People’s Action member group, led the charge, and were joined by other PA affiliates from across the country, including Fair Economy Illinois, Student Action and the Native Organizers Alliance (NOA). 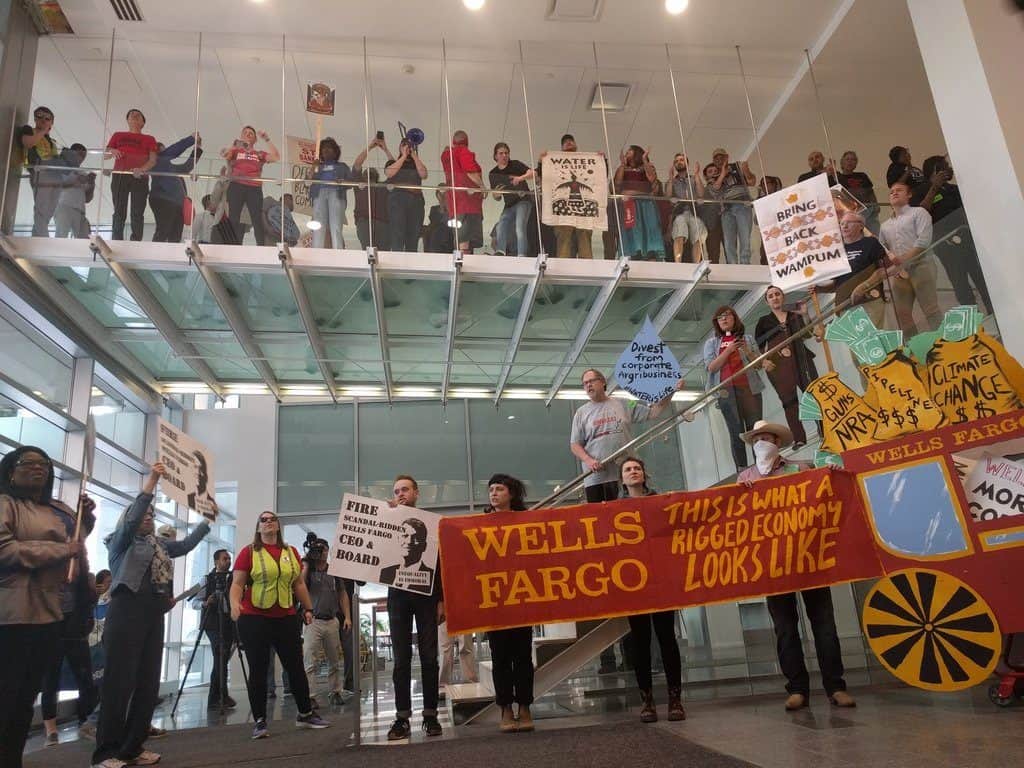 NOA activists, including Faith Spotted Eagle, were joined by a large presence of Native  other indigenous rights’ groups, including the Indigenous Environmental Network (LINK) and Indigenous Iowa (LINK) to protest the bank’s support of the Dakota Access Pipeline and other fossil fuel projects that directly threaten Native lands. From 2015 to 2017, Wells Fargo has invested more than $4.6 billion into fossil fuel extraction, including tar sands, coal, Arctic and deepwater drilling.

Faith drew attention to Wells Fargo's financing of the Dakota Access and Bakken pipelines, as well as the disturbing rise in assaults on and disappearances of Native women in areas affected by pipeline construction, near the "man camps" of construction and oil workers that have sprung up along the pipeline routes.

Wells Fargo has recently been fined $1 billion by the Consumer Financial Protection Bureau (CFPB) for its deceptive and predatory lending practices – which include ruining consumers’ credit by opening millions of accounts and charging extra fees without their knowledge. They are also the bankers of choice for the National Rifle Association and gun manufacturers.

Together, we marched from the Des Moines Central Library to the Marriott hotel, where shareholders were meeting. We took over the lobby long enough for Faith, Alex Anahi Rodriguez and other activists to speak out, including Amanda Werner – who’s now famous for her appearances as the “Monopoly Man” at hearings on Capitol Hill by Office of Budget and Management and CFPB head Mick Mulvaney, EPA chief Scott Pruitt and other Trump Cabinet members. 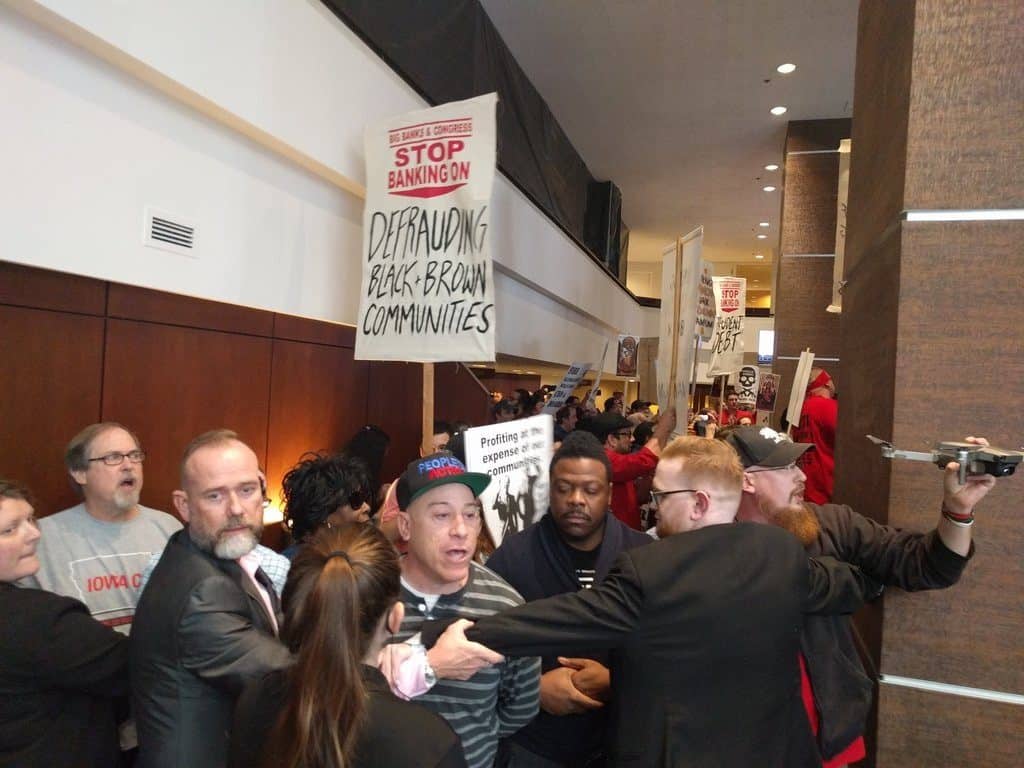 After a brief standoff with hotel security, we continued our march down Walnut Street to two of the bank’s larger offices in Des Moines, and continued our protests there.

Meanwhile, inside the shareholders’ meeting, more than a dozen activist investors made their voices heard. While they were respectful of the rules of the meeting, keeping their speeches within the allotted two minutes each, they were direct in their challenges to the banks’ assembled executives for their lending practices and support of the gun industry. Indeed, it seemed as if nearly all of the comments coming from the shareholders’ audience were critical of Wells’s shady lending practices. And when executives sought to abruptly end the meeting, they were met with chants of “Wells Fargo, you're the worst! Put people and planet first!”

The strong presence of Native peoples in Des Moines put this struggle into context: challenging Wells Fargo in this way is a continuation of 500 years of struggle. The economy of profit before people in the Americas first exploited and dispossessed African slaves and Native nations of their lands and bodies, in the name of white supremacy. 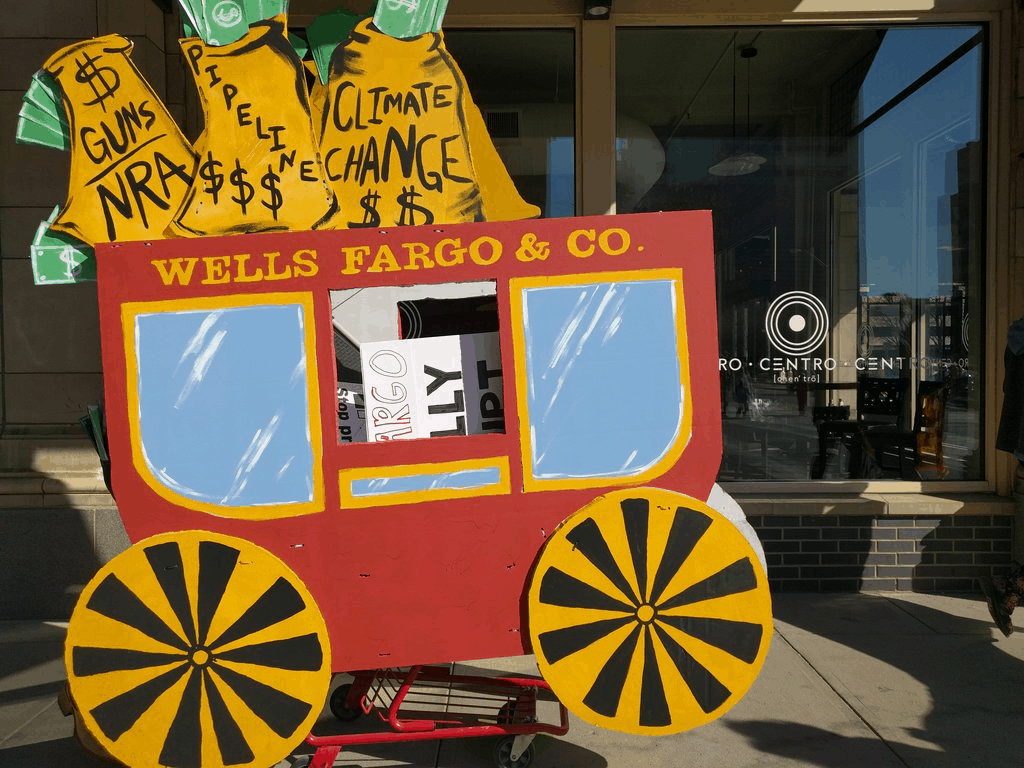 Seeing our present movement within a lineage of resistance is crucial in our fight for justice. Every direct action we plan, every corporation we protest, sits on land that was violently stolen from Indigenous peoples. That legacy lives on in the culture of abuse that fuels our own government.

An economic system that puts profits above people not only exploits our communities -- it coerces us into exploiting ourselves. Many working people accept jobs at Wells Fargo survive the very conditions that Wells Fargo helped build. Corporations like Wells Fargo create an economy that traps people into poverty and then gets them to participate in their own demise because they have few other opportunities to make ends meet.

What we know will win is a multiracial movement that places people who are especially vulnerable to exploitation at the center. We cannot have a movement without Native women, Black immigrants, LGBTQ youth -- people of backgrounds and experiences that are often deliberately forgotten.

Our struggle continues, and we want you to join us. Help shut down Wells Fargo by joining us on this community call. We’ll be talking about next steps in the campaign to hold America’s worst bank accountable.