We Need a Housing Revolution Now

Here’s an experiment: If you’re not downtown as you read this, go there now and find some homeless people. They probably won’t be hard to find. Now, look at their faces.

If you can’t get downtown, look at their photographs online. 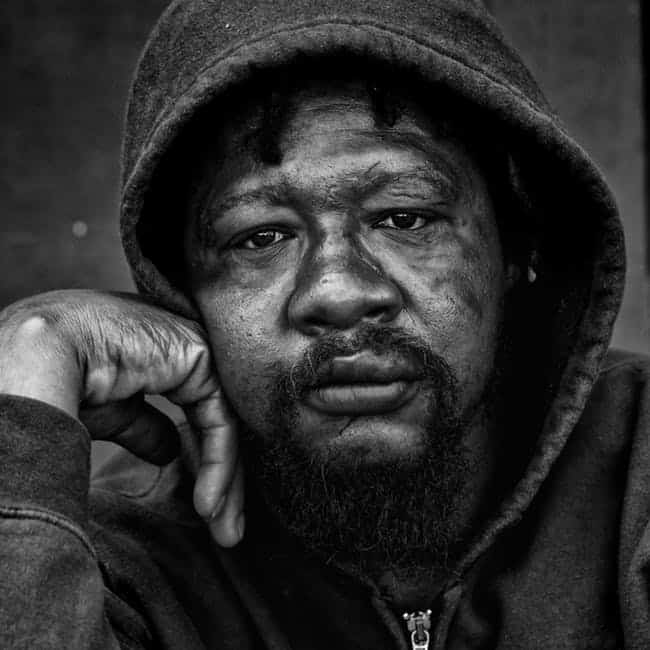 Now, imagine these same faces – just the faces – without anything to tell you that they’re homeless. They’re not that different than anyone else, are they?  Still, you may notice some differences. There may be more signs of ill health than you would find in a random sampling.

There will definitely be more people of color.

Homeless people are, in fact, nearly four times more likely to be African American. They are eight times as likely to be Native American.

Half a century ago, the United States committed itself to housing justice. We’re not even close.

April 11, 2018 was the 50th anniversary of the passage of the Fair Housing Act, which was designed to eliminate discrimination in housing. But signs of economic discrimination in housing are everywhere: in Black communities devastated by foreclosure, a “highly racialized” process, in the continued “redlining” of Black neighborhoods, in the long-term loss of Black wealth, in the higher lending rates charged to African-American and Hispanic home buyers…

…and in the faces of the homeless.

The Homeless Are Not “Other”

Look again at the faces of homeless men and women. They are the victims of injustice. Their homelessness is a textbook example of structural violence; Johan Galtung wrote a seminal paper on this subject in 1969.

For some, homelessness is a long-term problem. For others, it’s a few days or weeks couch-surfing or sleeping in a car.

Either way, homeless people are not the “other.” In San Francisco, for example, 70 percent of the homeless population had housing in the city within the last three years.

Homelessness is, in most cases, inextricably linked to the accelerating housing problems that affect all Americans: soaring rents, foreclosures and evictions. Economic inequality, and the lack of adequate facilities for the structurally and psychiatrically disabled.

Most Americans will experience at least one year of poverty in their adult lives.

Housing is a National Emergency

While there is racial disparity in homelessness, it knows no boundaries. The rural homeless are “more likely to be white, female, married, currently working, homeless for the first time, and homeless for a shorter period of time.”

Housing is a nationwide crisis. A person working a minimum-wage job in 2017 could not afford a two-bedroom apartment in any county in the United States.

And the culprits are the same ones driving so many of our other social crises. Many of them are based on Wall Street, and all of them put profits over people.

Many families lost their homes in the financial crisis of 2008, driving up rental prices around the country.  Many of the same banks who helped cause the crisis bought up  foreclosed properties and turned them into rentals, profiting from the tragedy they created.

Time for Ideas – and Action

To end this national disgrace, we need to come up with big and bold housing initiatives – and we need to make them a fundamental part of the progressive agenda. They should start from a simple, clear declaration: Housing is a human right.

Some groups are pushing neoliberal solutions to housing shortages, like the “YIMBY” movement to encourage unrestrained construction. This will lead to a proliferation of luxury housing, not affordable homes. The free market has proven incapable of reliably meeting certain social needs. Government, not the mythical free market, must drive the solutions.

How can we turn these ideals into action? We need a national conversation about that, but here are some places to start:

Current housing initiatives have failed to meet the need. They’re severely under-funded, which is a large part of the problem. But programs like Section 8 depend on the private sector to maintain and manage rental properties. At the same time, governments have stopped building public housing, and are not adequately maintaining the housing that already exists.

We need big, bold initiatives in housing construction. Ryan Cooper and Peter Gowan have a plan to build 10 million units of “social housing” that would house both fully-subsidized, low-income families and middle-class renters paying “solidarity rents.” This would help subsidize the housing, while also helping to reduce the racial and class segregation that is now endemic

(The full proposal is available from the Public Policy Project, here. Video of my conversation with Cooper about the plan is here.)

Communities of color have been the targets of financial exploitation for many decades. Of the homes in these communities are still underwater, while residents pay more in lending costs for home and car loans. The corporations that have exploited them should be required to make reparations by funding financial reinvestment, affordable loans for community members, principal reduction, and other programs of restitution.

Detroit voters passed a law in 2016 requiring developers to sign a community benefits agreement (CBA) before construction begins on any project of $75 million or more that receives tax abatements or any other concessions from the city.

The law lays the groundwork for bigger and bolder initiatives. Such initiatives could address projects of $10 million and above, ensure neighborhoods have advisory roles, and provide guarantees that cover job creation, environmental protection, and affordable housing.

Double HUD’s budget – as a down payment on future investment

The Department of Housing and Urban Development (HUD) was established in 1965 to ensure that all Americans had access to decent housing. But its housing benefits only target the very poor, excluding many other poor and middle-income benefits.

Only one out of four low-income households receive the housing assistance benefits they’re entitled to, even under today’s restrictive rules. 15.6 million low-income households pay more than 50 percent of their income on rent. They include the elderly, disabled, and families with children.

Even so, Republicans are cutting HUD’s budget and the Department is backtracking on its commitment to end housing discrimination and build inclusive communities.

HUD’s budget should be doubled, not cut – and that’s just a start. Programs for housing assistance should be expanded to cover all Americans who need them.

The idea can, and should, be expanded. Renters have very little recourse when landlords refuse to make needed repairs, or fail to comply with rental laws in other ways. It can be very difficult to file a complaint, justice can be greatly delayed, and renters often face harassment when they complain.

The right to attorney should also apply to any renter who has evidence that their landlord may not be complying with the law.

A national Tenants’ Bill of Rights

Everyone who lives in this country deserves affordable housing, protection from unfair evictions, freedom from discrimination, and the right to safe and well-maintained homes.

Get big money out of municipal elections

It’s very hard to pass and enforce reasonable housing policies when developers, and other large corporate interests, buy influence with their campaign contributions. Fortunately, there’s a solution: “clean government” initiatives that get big money out of politics. Limits to campaign contributions would help. Publicly-funded elections would be even better.

Tenants, cooperatives, and nonprofit groups should have the first right to purchase certain properties when they go on sale – at fair market rates.

Other ideas merit consideration, too: universal rent control, corporate responsibility provisions, and others yet to be imagined. But the process of change begins with a clear vision, and this vision is: Every American deserves a safe home, in a vibrant community, without living in fear of financial hardship or loss of shelter.

Get Up, Stand Up

The word "revolution" has been overused, but it fits when we talk about our housing crisis. We need to radically rethink our response to this crisis, with policies that are built around people rather than finance.

The vision of housing as a human right must become a fundamental part of the progressive vision. Activists are doing great work in this area; we need more – more activists, more ideas, and more work. Citizens need to ask candidates at the national, state, and local levels to commit to this principle. It’s good policy – and candidates are likely to find that it’s good politics, too. More importantly, it’s a moral challenge. Our society can no longer ignore it.