Restoring the Promise of the Fair Housing Act

The Fair Housing Act, passed fifty years ago today, was a critical victory of the Civil Rights era and an effort to address generations of systemic racism in housing policy.

The law intended to prohibit discrimination concerning the sale, rental, and financing of housing based on race, religion, national origin, or sex.

President Johnson signed the Act in large part to stem the tide of anger that rose in cities after the assassination of Dr. Martin Luther King, Jr., but it was regular people who won the Act, through a years-long struggle to demand fair and equal access to housing. 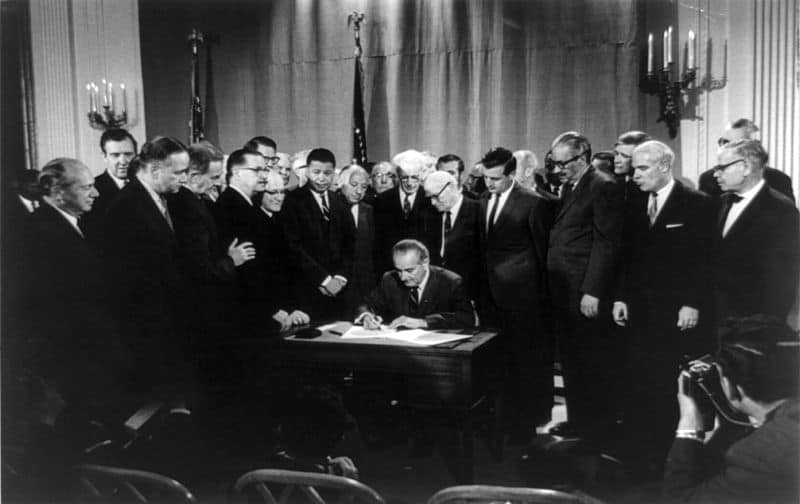 The Fair Housing Act was indeed a victory - but it wasn’t perfect, and didn’t come close to rectifying the injustices that, by 1968, were already ingrained in American communities.

Developers and planners had long embraced practices like “redlining,” by which they refused to lend to homeowners in Black neighborhoods, and “restrictive covenants,” which mostly excluded Blacks from living in white neighborhoods. Together, these practices severely restricted Black families’ ability to move to certain neighborhoods and to develop wealth through home ownership.

Together, these practices and others like them established patterns of segregation across the country, overtaking entire American cities. By the time Congress and the President decreed that housing discrimination was illegal, it wasn’t enough to fully undo the damage already done by decades of racism.

Now, Trump’s Department of Housing and Urban Development (HUD), led by Dr. Ben Carson, is actively working to undermine the gains won by the Fair Housing Act, as well as the people’s movements that have fought to make it better since its passage.

Under Trump, the Federal government is halting efforts to enforce fair housing laws and freezing enforcement against local governments and businesses that turn a blind eye to housing discrimination.

In 2015, the Obama administration sought to fulfill an unmet mandate of the Fair Housing Act that says communities receiving federal funds for affordable housing must “affirmatively further” fair housing by taking active steps to undo segregation.

This new rule required municipal authorities to complete a comprehensive Assessment of Fair Housing before they could receive HUD funding.  Under Carson, HUD has essentially suspended the requirement for cities to comply with this rule, tacitly sanctioning discrimination.

This unraveling of fair housing policy comes at a time when we need it - and perhaps need it more - than at any time since the Fair Housing Act was first passed. In 2018, the nation's housing crisis has reached emergency levels.

A person working full-time at minimum wage cannot afford a two-bedroom apartment in any county in the United States. More than half of all Americans spend over 30 percent of their income on rent and utilities. 12 million households, disproportionately households of color, dedicate over half their wages to housing. Today, more than three million families and individuals are homeless, including more than one million children.

Ten years later, those who have recovered their wealth are disproportionately white and upper-class, while several million people of color and working people remain under water on home loans and won’t ever recover their life savings.

And many of the same banks whose unethical lending practices helped create the mortgage crisis have now shape-shifted into speculators who exploit the wreckage they caused by converting foreclosed homes into rental stock, displacing whole communities across the country.

Each element of the contemporary housing crisis disproportionately impacts communities of color because of the enduring legacy of government-sanctioned racism in housing policy. Fifty years after the passage of the Fair Housing Act, racial discrimination in housing is as pernicious as ever.

A report released this February by the Center for Investigative Reporting, based on 31 million records, showed that Black and brown people are routinely denied mortgages at rates higher than whites. Redlining persists in 61 metro areas, from Tacoma, Washington to St. Louis, Missouri and from Mobile, Alabama to Camden, New Jersey.

Instead of meeting the challenges of the housing emergency, Congress voted for a $1.5 trillion tax giveaway that only exacerbates the plight of low-income and working-class families, and communities of color.

HUD funding has not kept pace with the nation’s needs. 75 percent of people who qualify for federal housing assistance don’t receive it. This is no accident: it’s the product of conservatives’ decades-long strategy to constrain, undermine and dismantle the role of government, and to move housing into the hands of private investors.

The Trump administration has proposed cuts that will devastate HUD funding even further. All of this will make it even harder for people to afford the basics: health care, food on the table, and a roof over their heads.

Our affiliate organizations in thirty states are now building power to win housing justice in their local communities. We are uniting the best experts we know - the people directly affected - to envision a more just future.

Our housing justice campaign affirms the central aspiration of the 1968 Fair Housing Act: that housing is an inalienable, indivisible human right. Building on the legacy of those who struggled before us, racial justice is central to our campaign.

Sustained attention to HUD’s funding and policy is critical to prevent the Trump administration’s efforts to completely abandon the fair housing mandate, and further fuel privatization.

In 2018, there is no future for fair or just housing without a real and honest acknowledgement of lawmakers’ failure to deliver on the promises they made to the American people 50 years ago.

We demand a radical rethinking of the HUD budget. While we’re glad that the recently passed omnibus spending bill for 2018 doesn’t include major cuts to the agency, that’s not good enough. We need massive reinvestment to end the current housing crisis, and reparations to communities that have consistently borne the brunt of shameful exclusion on the basis of race.

Only a HUD that’s fully funded and empowered to fulfill the promises of the Fair Housing Act - and goes even further - can meet the real needs of the American people.