Peter G. “Pete” Peterson, the billionaire businessman and anti-government crusader, died last week at the age of 91. He leaves behind family and friends who will miss him, and a vast coterie of consultants and politicians who may miss his checks even more. They can take comfort from the words of Percy Bysshe Shelley: “He doth not sleep/he hath awakened from the dream of life …” 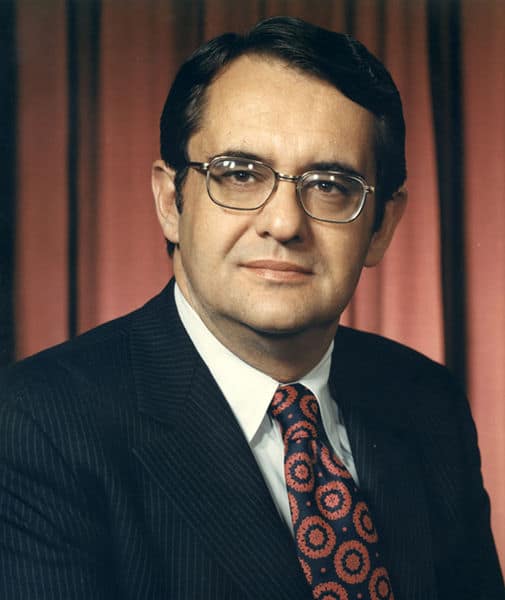 Peterson will be mourned by those who loved him. But that’s no reason to forget the harm he has done, especially since his family vows to continue his work. His son, speaking on behalf of the foundation Peterson created, says that “we will carry on his legacy with passion and pride.”

That legacy is marked by Pete Peterson’s long war against Social Security and Medicare, his austerity economics, and the false aura of objectivity Peterson used to promote his ideology.

Behind his carefully stage-managed veneer of bipartisanship (his team once tried to get me suspended from a publication for calling him right-wing), Peterson engaged in a decades-long war on the social contract. Programs like Social Security and Medicare were his immediate targets, but his ultimate goal was even broader: He wanted to extinguish the ideal of public goods, and put an end to the notion that certain social programs should be universal.

Peterson took conservative ideas and gave them an undeserved air of truth and neutrality. Politicians who embraced them were more likely to receive a steady flow of high-dollar contributions and gaining entrée to the right salons and alliances.

Thanks to Peterson, prominent journalists can make outlandish and inaccurate statements about “entitlement” programs, while still laying claim to journalistic objectivity. That’s no mean feat on Peterson’s part – although it becomes easier when you can spend nearly half a billion dollars in four years to promote your agenda, as Peterson did. (Peterson engaged in his crusade for decades; his total spending isn’t known.)

Peterson may be gone, but his ideology still holds sway in the corridors of political and media power.

Peterson was a corporate success at a young age, and then joined Richard Nixon’s Cabinet. But he became a billionaire as co-founder of the Blackstone Group, one of four firms that exemplify what The Economist calls “the barbarian establishment.”  As that (hardly left-wing) publication writes:

Peterson promptly put his billions to work on a new mission: Cutting government programs, especially Medicare and Social Security, and reducing government deficits. (The fact that these moves would reduce the political incentive to tax billionaires is never mentioned in Peterson’s work.)

Peterson’s sleight-of-hand trick, and it was a brilliant one, was to present his opinions as neutral and objective truth. As the New York Times reported in 2011:

If some consider him Cassandra and others Chicken Little, Mr. Peterson considers himself, in self-deprecating (and self-interested) terms, as a data-driven businessman who 'simply did the math.'

Here’s some real math: Medicare saves lives, and “greater spending per beneficiary is associated with significantly lower mortality rates.”  So does Medicaid. Social Security lifts 22 million Americans out of poverty, including children and non-elderly adults.

The Peterson team claims that its proposals would exclude the poor, but cuts are a slippery slope. Social Security benefits are already meager, and any reductions – including cuts to cost-of-living increases and increases in the eligibility age – will lead to added poverty.

Deficits were Peterson’s obsession. But when it came to economics, Peterson did the arithmetic, not “the math.” His zero-sum approach to government budgets failed to recognize the wide range of policy choices that are open to governments or the ways that government spending can create economic growth.

In a 2010 Wall Street Journal op-ed, Peterson argued that “spending cuts must play a lead role in any solution to our long-term structural deficits.” That’s an ideological statement that can’t be found anywhere in “the math.” For revenue, Peterson’s go-to solution was a consumption tax that would disproportionately harm the middle class.

No cut is too cruel for the Peterson crowd. A Peterson-backed group praised the draconian spending cuts in Donald Trump’s budget proposal last year, writing, "dThe President deserves credit for setting a fiscal goal and working to meet it."

But it chastised the Republican for failing to apply an equally heavy hand to Social Security and Medicare.

The policy heart of the Peterson agenda is means testing: of Social Security, Medicare, and other vital government programs. The Concord Coalition, which Peterson co-founded, pioneered the idea of means-testing Social Security benefits and reducing them for anyone making $40,000 per year or more.  The idea quickly spread to Medicare and other universal programs.

It sounds reasonable, at first. Why should rich people collect taxpayer-funded benefits? One answer – because it’s an insurance program – can be hard to convey, but is nevertheless important.

Voters forget that means-testing is a slippery slope. Once it’s applied to vital programs, it can be ratcheted down until most Americans are excluded from them. Should we means-test public high schools? Elementary schools?

Means-testing works for anti-poverty programs. But under social insurance programs like Social Security, everybody contributes and everyone is eligible for benefits (with limited exceptions).

For 50 years, both political parties favored these kinds of universal programs. Peterson changed that.

When people are debating means-testing, they’re not asking a more obvious question: If we’re so concerned about giving “free rides” to rich people, why don’t we just raise their taxes?

Peterson assembled an ensemble cast of characters to push his message. Ex-senator Alan Simpson became a key spokesman, primarily because he shared Peterson’s gift for making a heavily ideological agenda sound like blunt truth-telling. Erskine Bowles, David Walker, and a coterie of economic and policy consultants also filled the ranks.

Peterson recruited media figures, too, through his “Fiscal Summits” and other events. Prominent journalists were offered hosting and guest appearances at Peterson events (and were presumably paid for them) At least one received a board seat on a Peterson organization, while at the same time “objectively” covering Peterson-style initiatives. (I reported on Lesley Stahl’s conflict of interest in 2013.) Journalists were also given talking points to help them sound knowledgeable about fiscal policy.

Politicians of both parties embraced the Peterson agenda for years. Bill Clinton, who received Peterson funding on the road to the White House. turned the Democratic Party in a more Peterson-friendly fiscal direction. Clinton emphasized deficit reduction, privatization, and means-testing as president, while over-praising the skills of the private sector.

Clinton was a regular highlight at Peterson’s Fiscal Summit presentations, which feature the self-satisfied musings of privileged individuals who think they’re being brave for proposing policies that would pummel other Americans. These events typically treat even the worst political hacks, like John Boehner, as if they were statesmen. Paul Ryan, that empty-headed master of the Potemkin PowerPoint presentation, owes much of his undeserved “policy wonk” reputation to his hobnobbing with the Peterson crowd.

As president, Barack Obama followed in Clinton’s footsteps. As the nation grappled with the worst financial crisis since the Great Depression, Obama began his presidency by appointing Peterson acolytes Alan Simpson and Erskine Bowles to co-chair a commission. That commission wasn’t tasked with addressing soaring unemployment, or lost middle-class wealth, or the foreclosure crisis brought on by Peterson’s colleagues on Wall Street.

Instead, the Simpson/Bowles Commission was charged with reducing government deficits – and cutting Social Security, too, even though that program is forbidden by law from contributing to the federal debt.

There is a clear and direct connection between Obama’s embrace of Peterson-style fiscal austerity, including his administration’s reliance on many old Clinton economic hands, and the Democrats’ loss of political power over the last ten years.

A Little Something for the Kids

While he succeeded in penetrating the political and media establishments, Peterson was never able to build popular support for his ideas. No wonder. Among his wacky-sounding and ill-advised publicity campaigns, gimmicks, and astroturf organizations were “Budgetball,” the foolish mock politician “Hugh Jidette” (Huge debt. Get it?), “The Can Kicks Back,” and the “America Speaks” town halls, where attendees saw through the slanted material and rejected Peterson’s ideas anyway.

Peterson and his minions tried to recruit millennials by undermining their trust in the social contract and fomenting generational war. Simpson, himself the beneficiary of government pensions, called older Americans “greedy geezers” while other Peterson acolytes tried to persuade young people that Social Security will go broke before they retire.

That was an especially dirty trick. Peterson-backed cuts would target millennials, not Baby Boomers, because they would gradually be phased in over a period of years. Fortunately, nobody went for their “Budgetball” pitch.

For the most part, the political tide has turned against Peterson – at least for now. His ideas are being shunned, at least publicly, by Democrats looking to capture the disaffected mood of struggling working-class Americans — a mood that cuts across lines of race, gender, and geography.

Conor Lamb’s recent Congressional victory in Pennsylvania’s 18th District was embraced by the “centrist,” Peterson-friendly crowd. But Lamb’s campaign included both a hearty embrace of unions and an eloquent defense of Social Security. This Lamb TV ad, for example, explicitly targets the Peterson-friendly smearing of “entitlement programs.” Lamb’s opponent embraced Peterson-style benefit cuts, a position that is considered a major reason for his loss.

But Pete Peterson’s ghost still haunts the American political landscape. The truth is, it was haunting us years before his death.

When Bill Clinton promised in his 1996 State of the Union speech to “give the American people (a government) that lives within its means” and declared that “the era of big Government is over,” Pete Peterson’s ghost was in the hall.

When George W. Bush used a filing cabinet as a prop while asserting that there is no Social Security trust fund – “just IOUs” – Peterson’s ghost was smiling from the wings.

When TV journalist Martha Raddatz said that “both Medicare and Social Security are going broke” as she moderated a vice presidential debate  – a statement that is demonstrably false – Peterson’s ghost was sitting beside her.

When Barack Obama debated Mitt Romney and said, “I suspect that on Social Security, we’ve got a somewhat similar position,” Peterson’s ghost was standing at his elbow. (He was standing at Romney’s side, too, since both candidates shared Peterson’s view.)

When Hillary Clinton scorned the idea of tuition-free higher education in a debate with Bernie Sanders because it wasn’t means-tested, saying “I don’t think taxpayers should be paying to send Donald Trump’s kids to college,” Peterson’s ghost was whispering in her ear.

Peterson’s ghost walks beside John Harwood, Dana Bash, Mark Halperin, and every other television pundit who has appeared at a fiscal summit. It’s looking over the shoulders of Peterson-backed economists and policy advisors as they write their next op-ed about "hard choices" for the middle class. It’s sitting with Republicans in Capitol Hill and White House meeting rooms as they plan for a brutal round of "entitlement cuts."

Peterson’s family deserves our condolences. But Pete Peterson was not the “profoundly good man” mourned by Bill Clinton – at least, not for the rest of us.  Peterson did great harm to people who were far more vulnerable than he was. And, unfortunately, his work lives on.

Pete Peterson does not sleep, according to Percy Bysshe Shelley. But the rest of us need to wake up.