Why Public Schools Have Become the Epicenter of Rebellion

The revolution may not be televised, but it is happening in public schools. This is evident in the growth of student and teacher actions across the country, from walkouts to strikes.

This shouldn't be surprising to anyone who's been paying attention. Public school communities – students, teachers, parents, and citizens – have seen their institutions targeted with deeper budget cuts, greater inequities in the system, harsher penalties for "underperforming" on arbitrary standards, and deadlier gun violence. 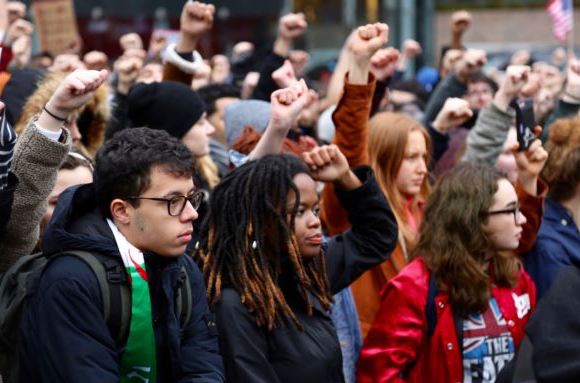 Is it any wonder that these constituents are starting to stand up and say they've had it?

This week, mass walkouts of students in middle schools and high schools spanned the nation to protest school shootings and lack of sensible gun control. Actions in nearly 3,000 schools were planned, and news organizations and social media users reported thousands of students participating in the demonstrations in countless cities and towns. Many of the events were captured on a nationwide "snap map" using the SnapChat social media app.

The walkouts, billed as the Enough National School Walkout, took place one month after the shooting at Marjory Stoneman Douglas High School in Parkland, Florida, which killed 17 students and educators. The organizers, the Youth Empower branch of The Women’s March organization, called for students to leave the classroom at 10:00 a.m. and stay out of class for 17 minutes: one minute for each person killed in the shooting.

Students haven't only kept their protests on campus. In Washington, D.C., thousands of students descended on the White House and Capitol Hill. An estimated 60,000 students flooded the streets across New York City.

School boards, administrators, and teachers were generally supportive of the student actions; although there were isolated incidents of schools preventing students from walking out, or threatening suspensions.

The students demand the right to attend school in an environment where they don't have to worry about being gunned down. "Protect lives, not guns" was an oft-observed sign held aloft in the demonstrations.

The mass student walkouts came close after another headline-grabbing story born from the public school community: the successful teacher strike in West Virginia.

In defiance of state laws making public employee strikes illegal, nearly 20,000 teachers and about 13,000 school service personnel in all 55 counties of the Mountain State shut down schools for nine days. School boards and administrators across the state expressed strong support for the teachers and took no actions to end the walkouts.

West Virginia lawmakers buckled to all five of the teachers' demands including a five-percent pay raise for all public employees, a realistic commitment from the state to address a broken public employee health insurance program, limits on charter school expansions, a continuation of seniority privileges for teachers and the ability of unions to deduct dues through payroll collection.

The successful action of the West Virginia teachers is inspiring similar actions in other states.

Teachers in Oklahoma have set an April 2 date for a statewide strike, if their demands for better pay and working conditions aren't met by state lawmakers. Like West Virginia, Oklahoma is also a "right to work state" where collective bargaining is outlawed. But the teachers are defiant none the less, and once again, school boards and administrators are backing the teachers.

In Arizona, two public school advocacy groups are planning a march on the state capitol for March 28. Their chief complaints are lousy teacher pay, college student-loan burdens, a shortage of qualified teachers, and cuts to classroom resources.

In Kentucky, hundreds of teachers are protesting cuts to their benefit programs. Local media are reporting the actions are a "precursor to a statewide strike."

It's not surprising that school communities have become a breeding ground for dissent.

People who rely on public schools have a lot to complain about. Government officials at all levels have been underpaying teachers and making their lives miserable, wielding budget cuts that close learning opportunities for students, and pushing schools toward more prison like conditions instead of doing something meaningful about gun violence.

Policy leaders and lawmakers have also remained largely deaf to the demands of those in the public education system.

Even as students were out in the streets calling for sensible gun control, President Donald Trump was reversing himself once again, backing off meaningful steps for gun control and increasing funds for arming teachers instead.

This is opposite of what public-school students and teachers say they want: meaningful gun control. A new bill passed by the House funds new school safety measures without directing more money for guns in schools. That's progress, but it does nothing to control the proliferation of guns that menace schools.

Kate Doyle Griffiths, writing in Viewpoint Magazine, puts her finger on another key reason public schools are at the epicenter of a new populist rebellion.

In explaining how the West Virginia teachers won, she argues the teachers were successful because "the strike was socialized because of its location at a concentrated point of reproduction: schools." As occupations increasingly drive employees into cubicles and career niches, schools are one of the few remaining institutions where employees "interface with more people than most other workplaces do, at least in an immediate sense. That these workplaces are connected to other ‘kinship networks’ mean that there’s an imminent possibility that they can be activated politically, becoming a privileged site of class organization."

Schools are America's most collaborative endeavor, by far. They're the places we've entrusted to teach the values of democracy. They're working.