Now Is the Time to Fight for Health Care in Idaho

Every Idahoan deserves quality, affordable health care. That’s the simple truth, and a vast majority in our state believes it. Now we have a chance to come closer to that goal, if our lawmakers will finally stand up and act for the people they say they represent. 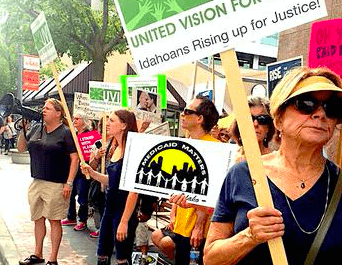 In 2014, thousands of uninsured Idahoans got access to health care through Your Health Idaho, a state-run healthcare exchange. While this exchange is run at home, the policies it offers are – at least for now - compliant with the Affordable Care Act (ACA), so they don’t bar preexisting conditions, or have coverage caps.

But thousands in our state fall into what we call the Coverage Gap. Because Idaho refused federal help to expand health care when it was offered, there’s now a gap between those who receive Medicaid and those who make enough to purchase coverage themselves. Roughly 78,000 in Idaho fall into this gap, and have no coverage at all.

To cover this gap, five years ago lawmakers introduced the Idaho Health Care Plan –an expansion that would cover another 35,000 in our state, and reduce premiums for everyone by 20 percent.

Earlier this year, it passed the House Health and Welfare Committee, but now the Republican House Speaker, Scott Bedke, refuses to release it to the floor for a vote.

Bedke’s reason to deny a vote to expand health care? No reason, really; even the Republican chair of the Health and Welfare Committee, Fred Wood, acknowledges that  ”75 percent of the people of Idaho feel that this Legislature should do something for the gap population.”

But Bedke steadfastly opposes anything that might appear to be an act of generosity by our state to its citizens, even if it means lives are lost. And he wants to save fellow GOP lawmakers the embarrassment of having to publicly acknowledge that they care more about the priorities of their deep-pocketed donors than the lives of their constituents.

Bedke is far from the only politician who is out of touch with the lives of ordinary Idahoans. We all recall last May, when Rep. Raul Labrador blithely told a town-hall meeting in Lewiston that “nobody dies because they don’t have access to health care.” Fortunately, there was a veteran ER nurse on hand to rebuke him and describe the suffering she sees every day.

“It absolutely kills people,” she said. “You don’t know what you’re talking about, and you should sit in ER waiting rooms and explain to people that are going to die [without] insurance.”

Or  Jenny Steinke, who died in 2015 from untreated asthma because state legislators refused to adopt the Medicaid expansion offered to them under the Affordable Care Act. Steinke’s mother-in-law said “her death certificate should read ‘Death by Poverty.’” She would have died anonymously if her family – and the physician who treated her after her fatal asthma attack – hadn’t made sure her story appeared in news around the state.

Steinke is one of the many Idahoans who fell into the Coverage Gap, and died. And if our lawmakers don’t act now, many more like her will lose their lives.

What We Can Do Now

To be sure, the Idaho Health Care Plan does not cover everyone - and some politicians in our state even want to roll back the care that Your Health Idaho offers. So we will fight them, too, and fight until every Idahoan has the quality, affordable care they deserve.

But this measure goes a long way to closing the Coverage Gap, so we’re asking everyone who cares about health in our state to join us on Thursday, March 15 at 11:30 a.m., on the Statehouse Rotunda in Boise, to demand that our lawmakers finally act to expand health care.

Five years is long enough; it’s time to close the Coverage Gap, before another life is lost. Year after year, the Idaho legislature has failed to act, and Idahoans are now rising up to demand that they give us the care that we deserve.If you live in a part of the state where travel is not possible, flood the inboxes of every member of the Idaho House  and mobilize your communities to do the same.