Why would Democratic senators join their Republican colleagues in pushing a bill that lays out a rich banquet of goodies before some of America's worst bankers, and increases the risk that taxpayers will have to bail them out?

Here are 24 million reasons: These 16 Democrats have collectively received $24,488,961 in campaign contributions from savings and investment firms and commercial banks. They have also received $42,246,555 from lawyers and law firms, some of which represent banking interests, and $4,318,208 from lobbyists.

The bill, which rolls back many of the key protections enacted after the 2008 financial crisis, will go before the full Senate shortly. It increases the risk of future bank bailouts and systemic financial crises. It also makes it easier for banks to get away with redlining, and discriminate against the very voters Democrats claim to represent.

With their vote, which all but guarantees the eventual passage of the deceptively named "Economic Growth, Regulatory Relief, and Consumer Protection Act," these Democrats gave Republicans the key to victory for an effort that began with an "in-person push" by lobbyists in Donald Trump's office.

In the face of criticism from activists, and from fellow senators like Elizabeth Warren, Bernie Sanders, and Sherrod Brown, these senators are defending their actions by attempting to mislead voters about the bill's contents. (Their false claims, which mirror those of President Trump and other Republicans, are refuted here.)

As Sen. Sanders said after the vote, "Congress now wants to deregulate some of the same banks that helped cause the 2008 financial disaster."

As David Dayen reports for The Intercept, the bill claims to assist community banks, but is laden with special favors for banks of all sizes. Most of its provisions apply to institutions with up to $250 billion in assets, which means many of the worst actors ofd the 2008 financial meltdown, like mortgage lender Countrywide Financial, would have enjoyed the bill's lack of scrutiny.

Other beneficiaries of the bill's largesse include Citigroup, which had wanted to see its weakening of the leverage ratio extended to our nation's largest banks. Perhaps not coincidentally, Citigroup - which is closely associated with the Democratic administrations of presidents Clinton and Obama - got its wish in this bill.

Dayen quotes Sen. Coons as saying, "There are a dozen different players who decided this (bill) is the last bus out of town.”

The Vote That Mattered

One or more of these Democratic senators may attempt to insulate themselves from the final vote for this bill, but this was the vote that mattered. The "motion to proceed" allowed Republicans to overcome the 60-vote hurdle the GOP used so ruthlessly against the majority when Dems were in power. Once that obstacle is overcome, future votes against the bill will be meaningless -- nothing more than another attempt to deceive voters.

“I don’t think a bill like that is good for anybody in America,” Sen. Warren said last week of the measure. But she was speaking only of voters. The bill is clearly good for corrupt, irresponsible, and lawbreaking bankers. And votes like these can be very good for the politicians who cast them. 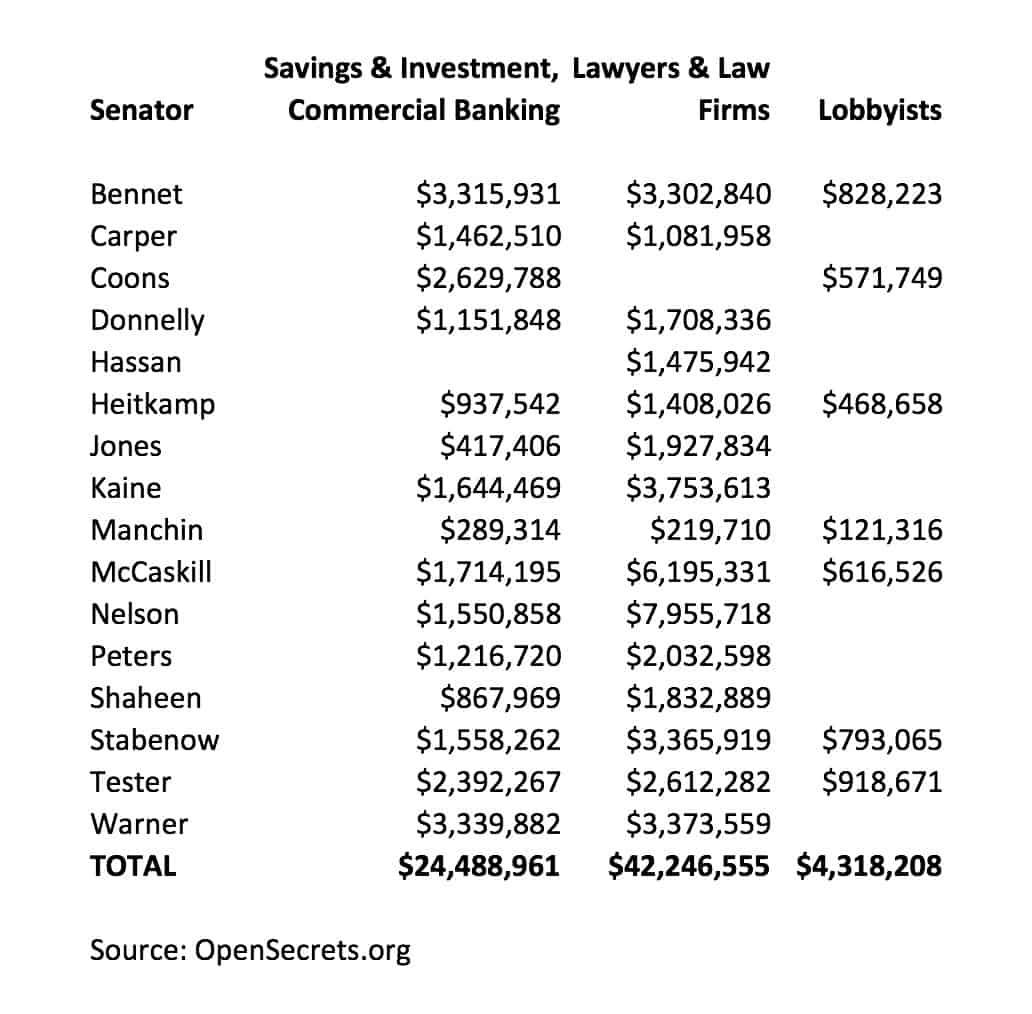 (These figures were tabulated from the Open Secrets pages for each senator. The totals are slightly understated, since Open Secrets only lists the highest-contributing industries for each politician.)

Here's why the CBO says the bill makes bank bailouts more likely: it eases regulations that require banks to draw up plans (known as "living wills") for winding themselves down if they fail, eases liquidity requirements (so they can cover their own obligations), and allows them to undergo fewer "stress tests" to prove they can withstand financial shocks.

The Systemic Risk Council is a non-partisan, blue-ribbon group formed to warn against future financial crises. While urging some relief for genuine community banks, the Council expressed serious concerns about this bill and warned that, "relative to the period when the financial regulatory reform was designed and legislated, certain aspects of the global environment have deteriorated."

The Council also noted that, "whenever the next recession comes, the adverse effects on borrowers and the financial system are likely to be worse than we are used to because the monetary policy arsenal is depleted ..."

It adds, "if the Dodd-Frank reforms were to be recalibrated, minimum capital requirements should be higher, not lower."

As Sen. Sherrod Brown said, "It is hubris to think we can gut the rules on these banks again, but avoid the next crisis."

The bill will hit some of Democrats' base voters especially hard. Its relaxation of reporting rules that curb discrimination is not only unnecessary, since these rules don't impose hardships on even the smallest banks. It is cynical, in that it makes it easier for banks to engage in discriminatory lending without fear of being penalized by regulators. If regulators can't find the discrimination, they can't prevent it.

And the record is clear: Banks have systematically discriminated against people of color. A recent report from the Center for Investigative Reporting concluded,

Open Secrets data reveals that three of the senators who backed this bill  have received $10,754,752 from "Women's Issues" groups like Emily's List, which Open Secrets describes as "organizations that promote the social and economic rights of women."

There's a bitter irony in that, since S.B. 2155's relaxation of anti-discrimination oversight will prove especially harmful to women's economic rights.  Women and girls were especially hard-hit by the global financial crisis of 2008, which was caused by precisely the kinds of bank behavior that will be made easier by S.B. 2155.

An Urban Institute study found that single women in the United States are systematically charged more for mortgages than single men, despite doing a better job at paying their mortgages.

It will not be possible for this study to be repeated if S.B. 2155 passes, since banks will no longer have to report on their lending patterns by gender or race.

Republicans from Trump on down are marching in lockstep for this bill. That's why it's so important to put pressure on Democrats like these 16.

The Dodd-Frank financial reforms did not provide the public with all the defenses we deserve against crooked and reckless bankers – it left too-big-to-fail banks intact, for example, and fell short of a 21st Century Glass-Steagall Act, updating the landmark 1933 law that separated commercial banking from investments, but it was an important first step. The public cannot bear the risks associated with weakening it.

There will be continued pressure for progressives to "unify" behind Democrats in the face of assaults on public integrity by Trump and his fellow Republicans. But Republicans are in power, in part, because Democrats like these have undercut public support for their party.

In a world where Republicans have already been bought and paid for, there is no room for Democrats who act in bad faith. With this vote, these senators have thrown their constituents under the last bus out of town.