The warnings came right after the storm: Hurricane Maria's devastation of Puerto Rico would be used as an opportunity to transfer management of the island's schools to private operators of charter schools, and introduce voucher programs that would redirect public education funds to private schools. 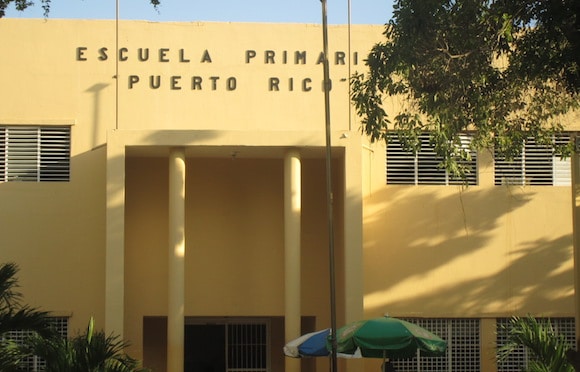 Sure enough, with nearly a third of Puerto Rico's 1,100 schools still without power and hundreds more plagued with crumbling walls, leaky rooves, and spotty Internet, Governor Ricardo Rosselló recently announced he will propose to create charter schools and voucher programs as a recovery strategy for the island's education system.

That announcement followed shortly after a new fiscal plan from Rosselló that included closing over 300 of schools.

The rationale for Puerto Rico's school closures relies mostly on the fact that in Maria's wake at least 22,350 students, or one out of every 13, have left the island, and the education system was shackled by an estimated $120 million debt and pension crisis before the storm. Student enrollment had already dropped significantly in recent years, and 179 schools were closed last summer

The argument for charter schools and vouchers, on the other hand, is much less supported by statistics and more reliant on rhetoric. Currently, there are no charter schools or voucher programs on the island.

But in an interview with The 74, a charter school-favoring media outlet started by former NBC news anchor and public school critic Campbell Brown, Puerto Rico's Secretary of Education Julia Keleher said these "options" are now needed to "have individual schools competing, striving to be the best, to make sure they can maintain their population so they continue to be economically feasible."

It's that kind of language that reminds Julian Vasquez Heilig of a pattern of "education reform" policy he has seen elsewhere. "The education privatization playbook uses politics to open the door for more privately controlled schools that are funded by tax dollars but are not democratically controlled," he tells me in an email.

Heilig, a professor at University of California - Sacramento, has written about Puerto Rican education policy before, saying in an article for The Progressive in 2015 that "Politicians in Puerto Rico are seeking to solve decades of fiscal mismanagement by adopting the same education reforms that are hurting children and starving school districts in the mainland United States. The disaster capitalism coming to the azure waters of Puerto Rico is very similar to the school privatization and private-control education reform causing an uproar in Chicago and Detroit."

Heilig's reference to disaster capitalism matches what others are saying about Puerto Rico after Maria.

A week after the storm made landfall on the island, and with most of the island still in darkness, author and journalist Naomi Klein warned in The Guardian that "vultures" circling the devastated landscape were advocating the only way for the island to get the lights back on was to sell off its electricity utility, a phenomenon of what she calls the Shock Doctrine: "the exploitation of wrenching crises to smuggle through policies that devour the public sphere and further enrich a small elite."

Education Week's correspondent on the ground in the island reported that Secretary Keleher, whose tenure started just nine months before the storm hit, was "diving deep into the lessons of loss and opportunity in previous natural disasters, including Hurricane Katrina, which struck New Orleans in 2005."

Recall that then-U.S. Education Secretary Arne Duncan called Katrina "the best thing that happened to the education system in New Orleans." After Katrina, New Orleans schools were shut down, over 7,000 teachers were fired, and the school board lost its power. Today, nearly all schools in New Orleans, but a handful of very elite schools, have been converted to privately operated charter schools.

Keleher, who leads the biggest government agency on the island, is a former management consultant, according to her LinkedIn page.

She initially arrived in the Island in 2007 from Washington, DC, as part of the team that would oversee the development of programs and use of Title I funds, according to Puerto Rican news outlet El Nuevo Dia. Title I funds are the federal government's largest allocations to K-12 schools and are intended to bolster the resources of schools serving low-income children, which makes them the largest source of federal funds in Puerto Rico.

Afterwards, she worked with the Risk Management Service on the island, which monitored the use of all federal funds. She was appointed to be education secretary in December 2016 just a week prior to the new government led by Rosselló taking office.

After her appointment, El Nuevo Dia reported, Keleher also finagled a dual contract with Rosselló that awarded her with another nearly quarter million dollars, giving her a total salary of $300,000 per year. As a new advisor to the Fiscal Agency and Financial Advisory Authority (FAFAA), she would have the authority to gather information about the way empty school buildings would be used, including buildings that she herself may have just closed with her authority as education secretary.

Her FAA position would also allow her to meet with mayors to determine what "innovative projects" could be launched in those closed school buildings. Perhaps even the "innovative" charter schools she now wants to see rolled out across the island?

Either through her work with the US Department of Education or her "diving" into the history of New Orleans schools after Katrina, Keleher reached out to get advice from Paul Pastorek.

When Katrina hit, Pastorek was Louisiana's superintendent of education. He saw the storm's aftermath as a clean slate to remake schools around his desires for privatization, and he is now viewed as the "architect" in designing the district's nearly all charter school make up.

What’s often left out of the New Orleans school reform "success" story is that converting the district to charter schools gave parents and citizens little to no voice in determining school policies and governance. Most parents lost the ability to have their children attend a school in close proximity to their homes, which resulted in student having to spend more hours in transit to schools across town.

Schools now open and close with greater frequency, creating more disruptions in family routines and students' learning, and more schools weed out difficult students in their enrollment processes. And the district's teacher corps has grown way more transient and inexperienced after the mass firing of mostly Black teachers after the storm.

Defenders of what happened to NOLA schools point to rising test score results and graduation rates. But these defenses often grossly overstate the progress in the city or fail to acknowledge the many complications that confound clear conclusions about the reforms – including Louisiana's shifting school performance metrics, the billions of dollars poured into the city by the federal government and philanthropies, and the huge demographic changes in the district's student populations.

Something Other Than Privatization

An article at The 74 is already soft-peddling the announcement of school privatization rollouts in Puerto Rico as a sort of New Orleans lite.

Regardless which style of privatization Puerto Rico rolls out, educators and parents are bound to protest. As the article mentions, Keleher's first target for charterizing are 14 Montessori schools. The article quotes a spokeswoman for the government agency that works to expand the island’s public Montessori schools who reportedly said, "Leaders at the existing Montessori schools … are not interested in converting their campuses to charters."

We've already seen how careless privatization has proven to be a disaster in Puerto Rico. Shortly after Maria hit, an Atlanta entrepreneur working as a one-woman company was awarded a $156 million contract to deliver 30 million meals. Only 50,000 were delivered and those were rejected for not being in compliance with the contract.

Similarly a tiny family utility-contractor operating out of his home in the ski town of Whitefish, Montana, was awarded a $300 million contract with the Puerto Rico Electric Power Authority to rebuild 100 miles of power transmission lines across the island’s shattered electric grid. This arrangement also proved to be disastrous.

Could it be that something other than privatization is the answer?