Women Take the Stage for 'The State of Our Union'

Five hundred women from across the country are gathering in Washington, D.C. for tonight's State of Our Union, which offers an alternative vision for our country in which gender and economic justice can overcome forces that seek to divide our nation along fault lines of race and class.

“The State of Our Union is ready to lift truth up, to raise our voices collectively and move mountains to create the United States that we all deserve,” said Chelsea White, from Haywood, North Carolina. “We know what it takes to rebuild our communities, and we are ready." 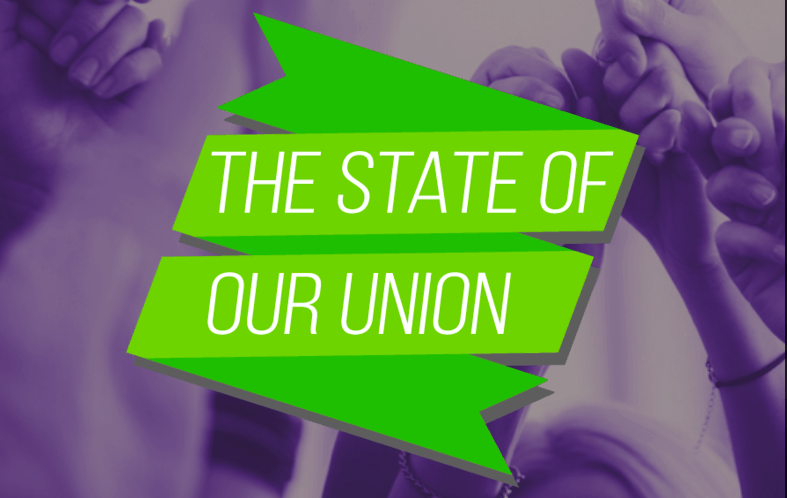 Click here to watch the State of Our Union live

Hosted at the National Press Club on Jan. 30 from 8 to 10:30 p.m. Eastern Time, the State of Our Union will be livestreamed at stateofournion.org.

White, a leader from Down Home North Carolina, a grassroots group in Appalachia, is one of the evening’s featured speakers. Other speakers and performers include U.S. Congresswoman Pramila Jayapal (D-WA), Alicia Garza, cofounder of #BlackLivesMatter, and Cecile Richards, the president of Planned Parenthood.

"The truth of Appalachian women has been drowned out for too long by a picture that's been painted of helplessness, but our truth is the foundation of this country,” said White, 24, who was born and raised in Appalachia by a single mother. “There’s a new wave of defiance growing in the mountains, and that defiance is female; it is young and old; and it is every color of the rainbow.”

More than fifty groups have come together to create the State of Our Union. DHNC is an affiliate of People’s Action, a national network of grassroots organizations, and she joins women from People’s Action affiliates in nine states at the event. National organizations present at the event include MomsRising, the Alianza Nacional de Campesinas, Color of Change, Women’s March, MoveOn and Girls for Gender Equity / #MeToo.

“There is nothing more powerful than women coming together and demanding change,”  said Ai-jen Poo, executive director of the National Domestic Workers Alliance. “We have already demonstrated that we are willing to carry more than our share of the weight in defending our democracy. It’s now time for action and solutions – on everything from sexual assault and harassment to low wages and pay equity; from elder care and childcare to paid family leave. “

Jayapal, the first Indian-American woman elected to the U.S. House of Representatives, joins other lawmakers including John Lewis and Maxine Waters in refusing to attend the official State of the Union address.

“With all the racism and hatred coming out of this White House, I will NOT be attending Donald Trump’s State of the Union address,” she wrote in a statement on Martin Luther King Jr. Day. “We will use the occasion to focus on the State of OUR Union, our opposition to his agenda, and we will lift up a progressive and inclusive vision of our country. I hope you’ll join us.”