A New American Dream for Jorge Garcia and All Of Us

It was a crisp day in November when my husband Jorge and I drove from our home in Lincoln Park to Detroit for our annual check-in with Immigration and Customs Enforcement (ICE).

We were hopeful that after twelve years of paperwork, Jorge would finally be approved to stay in this country. He loves the United States, where I and our two children, Soleil and Jorge Jr., were all born, and where he’s built a beautiful life over thirty years. 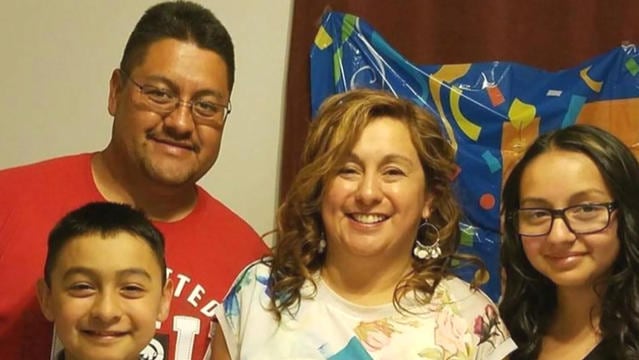 We had every reason to hope. When we got married, in 2005 we applied for permanent status for Jorge. It should have been easy, right? I’m a U.S. citizen, born in Michigan, and Jorge didn’t have a speck on his record – not even a traffic ticket – in the years since he’d been brought here from Mexico at the age of ten. He works, pays taxes, and contributes to our community. And isn’t the United States meant to be the Land of the Free?

Ironically, it was Jorge’s desire to do the right thing that landed him in front of an immigration judge. In 2009, we found out our lawyer had bungled the paperwork, and Jorge was ordered to leave the country in 90 days. We found a better lawyer, and were granted a one-year stay.

Since then, we’ve checked in every year with ICE, and were always told that since Jorge had no criminal record and came forward on his own, he was a low priority for deportation, and we would get a chance to try and fix his status.

All that changed on November 20th. ICE told us Jorge would be detained on the spot. My blood froze. How would I pick up our kids from school, or tell them their dad wasn’t coming home? My terror must have showed, because they changed their minds and told us that since Jorge was a low priority, they’d give him four more days. Then we got a phone call to say ICE would let him stay through Christmas, but he had to leave on January 15.

So on Martin Luther King Jr.’s birthday, we drove Jorge to Detroit Metropolitan Airport and said goodbye. Now he’s staying with an aunt near Mexico City, and will file for a waiver at the U.S. Consulate so he can come home.

What’s the best we can hope for? It could take eighteen months for Jorge to even get an appointment at the Consulate. What’s the worst? He could be barred from applying to return for ten years. All we can do is hope, and take one step at a time.

A lot of people come to me and say, “Wow, if this happened to you, who’s a U.S. citizen, what do I expect? Because I’m here undocumented.” At this point, a lot of people in our country are living in constant fear: they’re on edge, they’re uneasy.

So I won’t be silent. I’ll speak up, not only for our family, but for all those who are forced to live in the shadows through no fault of their own. I have to stand up and fight for the people who cannot do it for themselves, because I believe in justice for all, and equality for all.

Our immigration system is broken, and everybody knows it. And until we have a new system in place, I have to speak up, because I am a U.S. Citizen, and that is a privilege for me. I don’t have to live in the shadows, and have no fear of anyone to come after me and try and deport me, because I am from Michigan.

The only hope I have is that maybe Congress can sit down and come to a consensus and realize we need a new immigration law, we need the DREAM act, and we need a path to citizenship. And people need to realize that not everybody that’s here undocumented is a drug dealer, a rapist, or a criminal.

I understand why President Trump wants to keep our country safe from terrorism. I do, too. I don’t want anyone coming here to cause harm. But that shouldn’t keep good people like Jorge from coming out of the shadows and moving forward in life.

Trump needs to realize that the people who are here undocumented, like my husband, who is not a criminal, need a path to citizenship and need a new law, so they can have their dream.

Here in Lincoln Park, I’ve seen immigrants revitalize our community. Only a few years ago, our city was bankrupt. Then all these immigrants came in, paying taxes, putting money into their homes and opening businesses. Now lots of people stop off in Lincoln Park on their way home to enjoy our restaurants. Lincoln Park is coming back – so is Detroit – and it’s largely thanks to immigrants.

So even from an economic standpoint, we rely on immigrants, like we always have. That’s why we need to find a better way, one that’s fair, for DREAMers and for all of us.

That’s all that I, Jorge and every parent wants for our children: the chance for a life that’s better from wherever we come from, no matter where that is. That is, after all, the American Dream.