Remember all those pictures of smiling Iraqi citizens proudly holding up their blue, ink-stained fingers when they voted for the first time after the fall of Saddam Hussein? The Republicans - and far too many Democrats - who had supported the U.S. invasion of Iraq hoped those vivid images would appeal to the democracy-loving instincts of the American people. 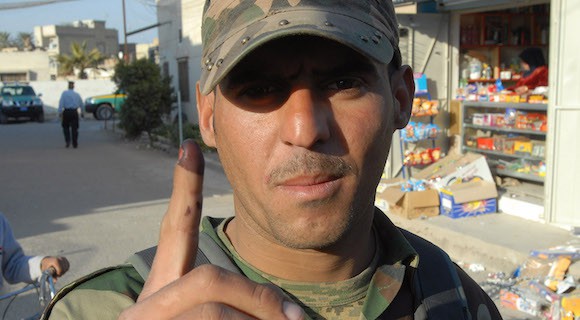 Americans do love democracy, at least in principle, although they’ve long abandoned their support for that misguided war. So how is it that the party that distributed those photos of blue fingers has also been able to engage in a decades-long assault on democracy at home, without paying a political price? And why isn't the party at the losing end of those machinations doing more about it?

The latest evidence of the Republican Party's anti-democratic activities comes from a federal court ruling, issued Tuesday, which found that North Carolina Republicans deliberately drew congressional district boundaries in order to benefit their own party.

Judges usually to infer undemocratic motives by the way districts are drawn. But North Carolina Republicans made it easy for the judges in this case statements like this one, from state representative David Lewis, who was responsible for redistricting. "I think electing Republicans is better than electing Democrats," said Lewis. "So I drew this map to help foster what I think is better for the country."

This kind of dirty politics doesn't happen by accident.David Daley has written a detailed account of "REDMAP," the GOP plan to regain political power by redrawing district lines in their own favor. Daley's book is entitled "Ratf*cked," and we interviewed him about it here.

As another court decision reminds us, this sort of thing is nothing new for Republicans. This week another judge lifted a consent decree against the Republican National Committee that had been in place since 1982. That's when the RNC was barred from their practice of sending intimidating mailers to African-American voters and hiring armed, off-duty law enforcement officers to stand watch at polling places in minority neighborhoods.

A related tactic, known as "voter caging," consists of sending mass mailings to neighborhoods that typically vote against your party; minority neighborhoods are the typical target.  When mailers are returned, voters are then struck from the rolls.

By targeting certain neighborhoods rather than others, voter caging is used for partisan purposes.  Worse, as the Brennan Center explains, this tactic is often targeted against registered members of a political party.

As the Brennan Center notes, caging is a "notoriously unreliable" technique for legitimately purging ineligible voters. It's extremely effective, however, in helping one party gain an unfair advantage over another.  That was also true of an Ohio Republican scheme, led by Secretary of State Jon Husted, which gamed election law to purge legally-registered voters for infrequent voting.

A Reuters investigation found, unsurprisingly, that Ohio Republicans benefited from Husted's actions.  Two million voters were purged from Ohio's rolls between 2011 and 2016, according to Ari Berman of The Nation, with 1.2 million of them purged for infrequent voting.

But, as bad as things are for Democrats today, they could get much worse very quickly. If the Supreme Court rules in Ohio's favor, caging and its variants could become common practice in the two-thirds of state governments controlled by Republicans.

Nor is the recent disbanding of Donald Trump's "voter fraud commission," which under Kansas Secretary of State Kris Kobach had sought to enact some of these tactics on a national level, necessarily good news for Democrats. By handing over its responsibilities to the Department of Homeland Security, Trump could be putting the machinery of the national security state behind these antidemocratic efforts.

Democrats have not always been angels when it comes to gerrymandering and related tactics. Far from it. But far more often than not, especially in recent years, they've been the victims of a range of voter suppression tactics that includes gerrymandering, caging, and understaffing minority-neighborhood polling places. So why aren't they making an issue of it?

While many voters are still unaware of more esoteric techniques like caging, an anti-gerrymandering agenda would be very popular with voters, according to a bipartisan poll released last September by Democratic researcher Celinda Lake and Republican analyst Ashlee Rich Stephenson.  Lake and Stephenson found that 80 percent of Democrats, 68 percent of independents, and 65 percent of Republicans would support a Supreme Court move to end partisan gerrymandering.

Said Lake: “This issue has bipartisan consensus even among partisan voters.”

To be clear, these issues aren't the only thing Democrats should be talking about. In that sense, Jeff Greenfield is right when he writes, "What ails the party - at every level - goes far beyond alleged Republican skullduggery. And a diagnosis of those ills requires an understanding of what the past decade has wrought."

To make matters even worse for Democrats, President Trump is hastily filling vacant judgeships all over the country. That will make it harder to pursue democratic claims in the courts.

Democrats can't passively count on the "Rising American Electorate" of unmarried women, people of color, and millennials to rescue them.  They need to offer these voters a compelling agenda – one that motivates them to overcome the many obstacles to voting that are being placed in their way.

Democrats need to come up with social and economic policies that are strong enough to bring their base to the polls.  But these voters also deserve to know that their rights are being systematically suppressed – and that they can do something about it by voting incumbents out of office.

The party that gave us those "blue finger” pictures is now sticking its finger in the eye of American democracy. So why are Democrats talking about this issue every day?  Somebody should.