All our eyes have been glued to the devastation that is Hurricane Harvey. Here in New Jersey, we are still waiting on the help we were promised to fully recover from Superstorm Sandy, so we know the road home will be long and full of challenges.

We feel heartbroken at the sight of thousands of Gulf Coast families displaced by the storm, which dumped over 50 inches of rain in just four days. As the storm was hitting, Houston experienced over 56,000 calls to 911 in just 15 hours. 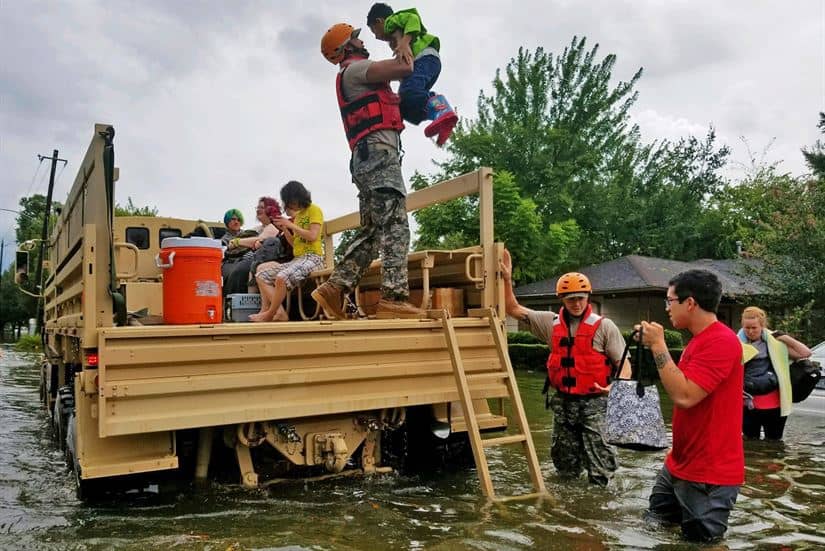 More than 32,000 people evacuated their homes and crowded over 300 shelters at double their capacity. Over 8,500 people were and are being rescued by boat from their homes after being stranded on rooftops, attics, and anywhere they could find higher ground.

All of this is painfully familiar to us in New Jersey. Here in Belmar, our home was submerged in salt water for seven days. We thought there was high tide, and when the tide went out, the water would go out. It did not.

The saltwater basically just ate away the foundation to our home, and with it, our lives. It crumbled, fell apart. We lost the house, and most of our possessions.

But we were the lucky ones. We came together, and with help from our community and the New Jersey Organizing Project, we were finally able to rebuild. Many of our friends and neighbors are still waiting to come home.

Harvey left the Texas gulf completely underwater and also hit Louisiana with over two feet of rain, dramatically flooding the eastern part of the state on the 12th anniversary of Hurricane Katrina. People are saying it’s the worst flooding in Texas in a thousand years.

This is the reality of what climate chaos looks like now: a series of unprecedented catastrophes, each one more severe than the last.

We know this didn’t happen by accident. Our climate crisis is the product of an economy that puts profit over people and the environment, and a government that turns its back on the needs of families.

Black, brown, and poor and working communities are hit first and hardest by the impacts of climate change. It was true twelve years ago when Katrina hit Louisiana, it was true five years ago when Hurricane Sandy hit the Northeast, and it’s true today.

All these “thousand year floods” that hit our communities several times a year are a sobering preview of what we should all come to expect, and that will continue to be true unless we work together to change it.

The True Cost of Floods

Just ten days before Harvey hit land in Texas, Donald Trump signed an executive order that eliminated the federal flood risk management standard that asked agencies to account for climate change projections when they approved projects, effectively killing a rule that was designed to protect cities from flood risks.

Though the rainfall has subsided, the work to recover is just beginning. Superstorm Sandy hit the eastern seaboard five years ago this October. The ugly truth is that five years later, too many people are still fighting to go home. The New Jersey Organizing Project formed two years after the storm to organize Sandy impacted communities.

In Belmar and other towns along the Jersey Shore, the flood was the easy part. After the water was pumped out, we had to fight adjusters, fraudulent engineering reports, and insurance companies that couldn’t care less.

In our case, we had to hire an attorney and pay him a third of our settlement. Ironically, the attorneys of our insurance company, who was refusing to pay our claim, were fully paid by FEMA and the National Flood Insurance Program (NFIP).

We were literally paying for attorneys on both side of the table: as taxpayers, for those theoretically fighting for us, and as policyholders, for those fighting against us. While we and other victims of Sandy were fighting to get back home, insurance companies banked $400 million in profit.

Why We Need to Save the NFIP

The NFIP is up for reauthorization this month.  We have a chance to make the NFIP serve families on the frontlines of rising water.

The NFIP needs to reflect the realities of our changing climate: flood insurance should cover the costs of mitigation to protect families, not just the costs incurred when a home is damaged or destroyed. And it's not just owners, we need protections for renters and multi-family housing.

Last, as flood insurance costs continue to rise, we must make sure no families are priced out of protection and that benefits to flood survivors reflect the actual costs of rebuilding, or if they chose, relocating.

When In Doubt, Organize

We can, and should, do everything we can to support those who need relief in the Texas gulf right now. We should also recognize that the water will keep coming.

The best thing we can do is organize, both locally and nationally, to ensure the protections we all pay for through the NFIP and other programs benefit the people who need this help most, when they need it most.