What You Can Do Now to Help Dismantle Racism

Last weekend, the world saw Charlottesville invaded by white supremacists who came to terrorize, hurt, and even kill our town’s residents. It was an ugly and very destructive moment.

These protesters came to Charlottesville because they’re afraid of change - so afraid, they’re willing to terrorize the rest of us to prevent it.

We at Virginia Organizing would like to express our sympathies to the families of those who were killed and to the many people who were injured.

Twenty-two years ago this week, our group was born in Charlottesville. One of the goals we committed to at that very first meeting was dismantling systemic racism in Virginia.

Our chapters are at work all over Virginia — every day — fighting for the civil rights of people of color and other groups who are affected by discrimination. We fight non-violently through the democratic process, taking on effective campaigns.

What We Can Do Together

Thousands of groups across the country and world have held vigils to express solidarity with Charlottesville. Many have asked us what they can do to fight back against white supremacy.

We ask you to join us and do at least one thing — today — that will have an effect. And please make a commitment to do as much as you can every day. Hate has no place in this world.

At Virginia Organizing, we seek members of affected communities to lead the way in solutions. When we engage with racist institutional structures, people of color lead the way.

This kind of organizing is what gets the job done. 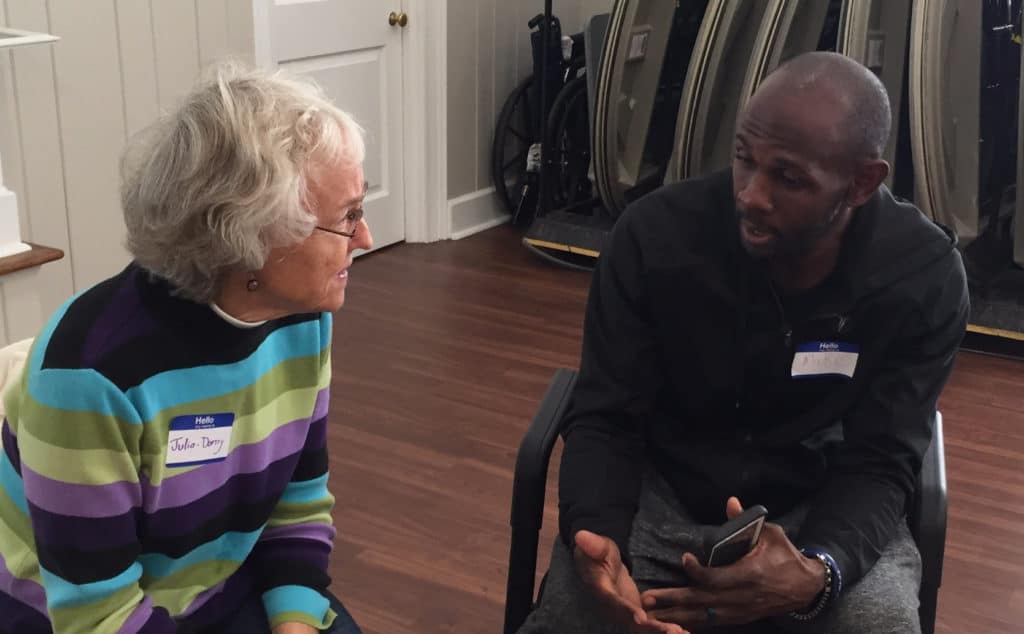 In Portsmouth, our chapter convinced the school board to change its Code of Conduct to prevent discrimination. Our local leaders did some great community organizing that will reduce school suspensions that disproportionately affect students of color and students with special needs.

That change came out of a Dismantling Racism workshop we held in Portsmouth in in November, 2016. In this workshop, leaders strategized about how to stop the school-to-prison pipeline in their community.

The “pipeline” is a form of systemic racism where children of color are subjected to overly severe discipline in school, which can send them in a spiral of consequences toward juvenile detention and prison.

Help Us in Virginia

Here are some things you can do to help us in our fight for civil rights in Virginia:

The University of Virginia, which once owned hundreds of enslaved people, has hundreds of low-wage workers who are people of color. Contact UVA President Teresa Sullivan and the Board of Visitors and tell them to pay a living wage to all of their employees.

In Virginia, as in many states, the formerly incarcerated are stripped of their voting rights, but we can help get them back. Contact Harold Folley at (434) 984-4655 x231 to work on this campaign.

Urge your Commonwealth Attorney’s office and courts to avoid revoking driver’s licenses as a consequence of owing court costs, and to make driving without a license a ticketable offense, rather than a criminal one.

Help Your Own Community

Here are some things you can do to fight for justice in your own community:

Call your U.S. Senators and Congressional Representatives  at 202-224-3121 to stand up against the U.S. Department of Housing and Urban Development's proposed cuts. These cuts would prevent local governments from improving public housing.

Donate to an organization or non-profit of your choice that supports racial justice in our town or yours.

Virginia Organizing has developed a "Dismantling Racism Checklist." We use it in in our workshops all across the state, but it's effective anywhere and everywhere.

Thank you for joining us to take action and help dismantle racism.