On Tuesday, 50 Republican senators showed contempt for their constituents by voting to move forward on repealing our health care, with Vice President Mike Pence stepping in to break the tie. 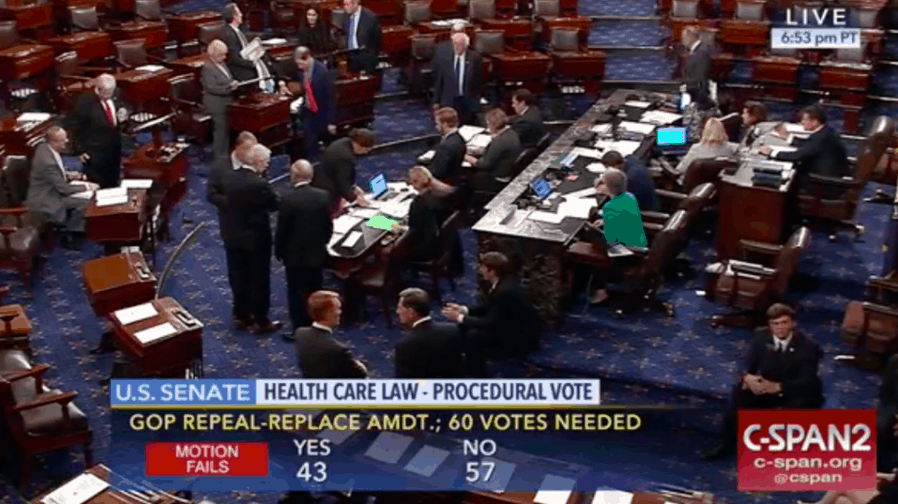 Nine GOP senators later broke ranks in a late-night session to vote down the Senate’s toxic version of the bill, the Better Care Reconciliation Act (BCRA) – which would have rolled back much of the Affordable Care Act and gutted Medicaid, ending coverage for 22 million – but there are more votes to come, including one that may simply repeal care and and strip coverage from 32 million.

The final version of the bill may be nothing more than a placeholder – a Trojan horse for setting up a Republican Senate-House conference committee that will use yet another secretive, undemocratic process to craft yet another version of health repeal.

GOP leaders will want the new version to look just like their previous versions: cut taxes for corporations and the rich, raise the price of coverage for the rest of us, unravel Medicaid, and take health care from 22 to 24 million people.

Among Republicans, only Sen. Susan Collins of Maine and Sen Lisa Murkowski of Alaska had the courage to stand with their constituents and vote no on moving forward.

By voting to move ahead on the health care debate, Sen. Dean Heller of Nevada caved to pressure from Trump and casino mogul Steve Wynn. Almost 630,000 Nevadans get their health care through Medicaid and are now in jeopardy.

Sen. Shelley Moore Capito of West Virginia caved under the weight of right-wing donor money and attack ads. With three in 10 West Virginians getting their health care through Medicaid, Capito’s state will be harder hit than almost all other states the country.

Ohio’s Sen. Rob Portman also caved, representing a state where hundreds of thousands of people finally got coverage because of expanded Medicaid under the Affordable Care Act.

It was extremely irresponsible of Portman, Capito, and Heller – who have all expressed concern for constituents enrolled in Medicaid – to throw their weight behind this reckless process without a clear plan for protecting Medicaid coverage.

In statements, Capito and Portman have both said they’ll make good on their concern in the days to come, but both voted with their GOP colleagues for the BCRA on Tuesday night. Heller, who voted against the BCRA, said he wants the bill to be improved.

And let’s not forget the true heroes in this fight.

These heroes include the West Virginians who’ve been holding Capito’s feet to the fire for months with creative protests and civil disobedience. They also include the Mainers who delivered messages in a pill bottle to Sen. Collins and tracked Rep. Bruce Poliquin down at a Boston fundraiser and reminded him who he’s supposed to represent. And let’s not forget the seniors who braved a Great Lakes blizzard to protest in front of Speaker Paul Ryan’s Racine office.

Like these heroes, tens of thousands of people have shown up at protests and town halls, often speaking up for the first time in their lives. In every corner of the country, people have put their senators on speed-dial, camped out in congressional offices, and rallied friends.

We really are in a fight for our lives. Yet we’re motivated not just by fear but also by moral outrage. We know how fundamentally wrong it is to deprive people of health care.

And our fight isn’t over. Republican leaders wanted to put health care repeal on Trump’s desk in January. It’s the end of July, they’re still scrambling. That’s because of us.

In the coming days, let’s keep making calls and showing up at rallies and protests. Let’s track every vote this week, and raise the pressure on senators and representatives alike if repeal moves to a conference committee.

We’ve shown an incredible persistence in our fight. We’ll show plenty more when it comes to holding politicians accountable for a vote that favors big-money bullying over the people they’re supposed to represent.