If Hell Had a Budget: The GOP Breaks the Ten Commandments 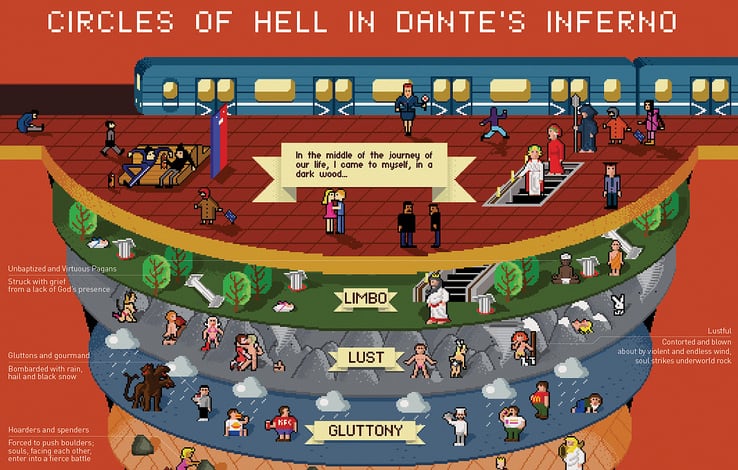 If the city seemed like Hell, the resemblance was only heightened by the shadowy figures passing by in black chauffeured vehicles, their faces hidden by smoked glass as they glided through the city in air-conditioned comfort.

Some of those vehicles carried the Republican Congressional leaders who were finalizing the House GOP’s 2018 budget, which the House Budget Committee sent to the floor last Wednesday. If hell had a fiscal policy, it would look a lot like that document.

This budget is a wish list for millionaires, billionaires, and corporate special interests. It also breaks most of the Ten Commandments, which is more than a little ironic for the GOP, a party that prides itself on its Christian piety.

This budget is designed to serve the unbridled greed of the ultra-wealthy, offering them even more tax cuts and inflicting suffering on the least of us to do it. They were apparently "coveting" the money that pays for kids’ breakfasts and other meals, since that's one of the programs that will be cut in order to give billionaires their million-dollar tax cuts.

“Honor your father and mother?” This budget cuts Medicare by nearly half a trillion dollars over ten years, either through explicit cuts or by “assuming” moves like raising the eligibility age to 67. It also cuts federal retiree benefits.

“Thou shalt not kill”? People will die if this budget is enacted. Medicare significantly reduced the elder mortality rate, which will presumably rise again if these cuts are enacted. Additional deaths will result from the budget's cuts to Medicaid.

For more direct forms of killing, the House GOP budget calls for $929 billion more in military spending — already higher than it was at the peak of the Cold War — while cutting all non-military spending by $1.3 trillion over the same period.

While the budget sometimes punts the details to specific committees, the result for committees like Ways and Means (which supervises aid to needy children) are a foregone conclusion: to find $52 billion in savings, that committee would need to cut vital, even life-saving programs.

False witness? The budget promises that prosperity will come from its  “pro-growth policies,” like "deficit reduction, spending restraint, comprehensive tax reform, welfare reform, Obamacare repeal-and-replace legislation, and regulatory reform.” But economic research and experience shows that such cuts, commonly described as “austerity economics,” have the opposite effect.

The U.S. economy would have grown more quickly without the spending cuts known as “sequestration.”  Europe’s economy was squelched by austerity policies. Nevertheless, the GOP promises that the US will see 3 percent annual growth under its draconian budget.

False gods? Those growth figures show that this budget worships the graven image of a discredited god: the “free market” idol that has failed, over and over, to deliver the prosperity it promise once the innocent were sacrificed in its name. C'mon, guys: Don’t trickle down on our heads and tell us it’s raining.

“Thou shalt not steal”? There’s no other word for a budget that robs people of their livelihood, of food and medical care, just to lavish more money on those who are already fabulously wealthy.

“Remember the Sabbath Day and keep it holy?” How many working Americans will be able to take a day off on Saturday or Sunday — among those lucky enough to have any job at all — when this budget ensures that they’ll need to work as many hours as they can just to get by? (That is, if they can get by at all.)

As for taking the Lord’s name in vain: Do these guys do anything else? You don’t have to be a believer to recognize the hypocrisy in a party that wraps itself in the mantle of religion and then defies that religion’s core teachings: care for the poor and the sick, honor the elderly, tell the truth, refrain from killing.

The detailed arguments over faith are best left to experts like these sociologists of religion. And the testifying can come from the Rev. Traci Blackmon, who knows what she’s talking about when she tells Republican Senator Mitch McConnell: “Call your god who your god (really) is: capitalism.”

Democrats probably won’t challenge the GOP budget on moral grounds. If they don’t, they’ll be making a mistake. Americans appreciate fairness, and kindness, decency, and loving thy neighbor as thyself. They also tend to reject greed, and lying, and brutality. Democrats shouldn’t shy away from moral language — but they probably will.

To be fair, the House Republican budget doesn’t violate every commandment. There’s no lust or adultery in it; maybe they think those sins are an Executive Branch function. But, all in all, this budget seemed strikingly in sync with the hellish weather gripping Washington as it was introduced.