Medicare For All Is Coming, No Matter What They Say

The idea of Medicare for All, or single-payer health care, has grown in popularity so quickly that it was recently an answer on the quiz show Jeopardy: 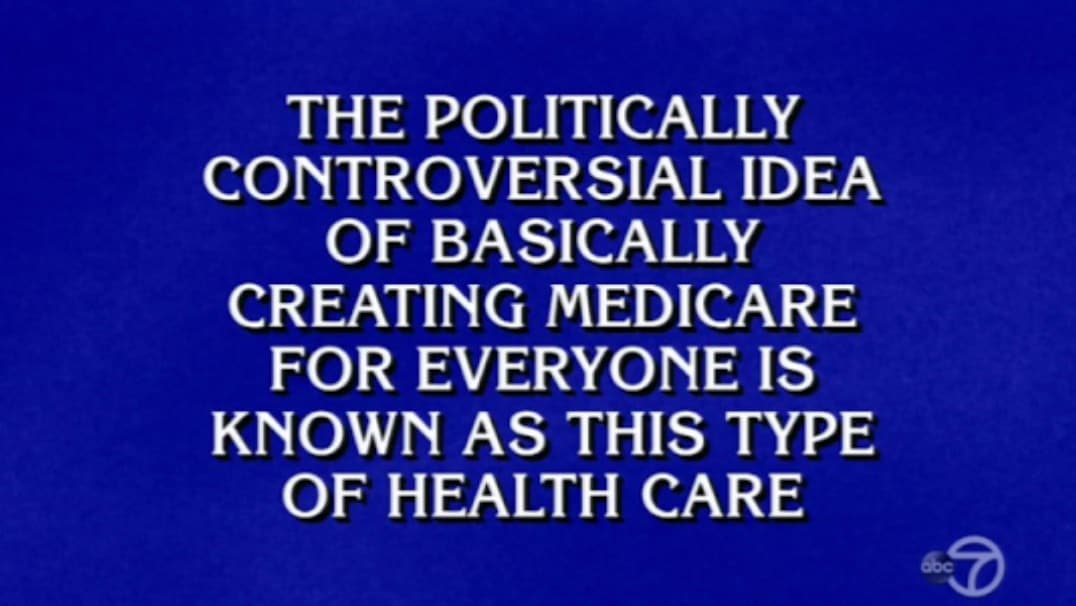 But at the same time, Medicare for All suffers from the rise of a new growth industry: telling Americans what can’t be done to make their lives better. It seems like the nation that used to pride itself on its “can-do” spirit is constantly being told, “No, we can’t.” Why do critics oppose this idea, which could improve the lives of so many?

Bernie Sanders’ presidential candidacy injected the single-payer idea into the political discourse. That created an opening for Democrats to embrace the idea as they seek to oppose Republican efforts to dismantle Obamacare. These include, significantly, Sen. Elizabeth Warren of Massachusetts.

“President Obama tried to move us forward with health care coverage by using a conservative model that came from one of the conservative think tanks that had been advanced by a Republican governor in Massachusetts,” Warren recently said. “Now it’s time for the next step. And the next step is single-payer.”

Yet even as the idea grows in popularity, opposition to it has become more vocal. Much of that opposition adopts the world-weary pose of the seasoned professional who has abandoned the idealism of his youth and is regrettably forced pass his disillusionment on to those who are more naïve.

Krugman for the Opposition

One example of this world-weary opposition is a 2016 column by economist Paul Krugman column entitled “Health Reform Realities.” Krugman argues that Obamacare is the left’s “biggest political success in almost half a century,” that “incumbent players” like insurance companies are “too powerful,” that there would be disruption in a switch to single-payer (more about that shortly), and that it would be “difficult to make that case to the broad public” that they will save more money from out-of-pocket health costs than they will spend in new taxes.

Krugman reiterates this argument in a recent op-ed, writing: “Most of the health economists I know would love to see single-payer — Medicare for all. Realistically, however, that’s too heavy a lift for the time being.”

Elsewhere, Krugman approvingly quoted Ezra Klein, another healthcare “realist,” for dismissing a major overhaul of the health system as “puppies and rainbows.” Condescending phrases like that are a key element of the “world-weary” style.

Krugman argues that Medicare For All is politically unachievable, despite its growing popularity. But when he’s confronted with a real political problem – Republican governors’ unwillingness to work with Obamacare’s Medicaid provisions – he waves the problem away, saying only that “Republicans show no interest in making that happen.”

But then Krugman has been misjudging the politics of healthcare for at least a decade now. In the 2007 primaries, a mandate-driven plan much like “Obamacare” was proposed by John Edwards and quickly embraced by Hillary Clinton. Krugman insisted on characterizing it as “universal health coverage.” We chided him for it at the time, since it was always clear (or should have been) that many people would remain uninsured under such a program.

Krugman also misinterpreted a 2009 poll somewhat. The poll, conducted by the Boston Globe and the Harvard School for Public Health, found that 79 percent of Massachusetts residents wanted to keep the law. A closer reading indicated the political dangers facing Obamacare. Support for the law had begun to slip, even without the Republican onslaught that everyone should have seen coming at the national level. Residents were “evenly split” on whether the law could continue without changes. A majority wanted to see the law changed, with cost reductions being the primary concern.

Health care costs, even after the Affordable Care Act, are at crisis levels. The actuarial firm Milliman calculates that the average family of four with “good” employer-based PPO coverage will pay more than $11,000 in out-of-pocket expenses this year. So when Krugman writes that “most Americans under 65 are covered by their employers and are reasonably happy with that coverage,” and that “they would understandably be nervous about any proposal to replace that coverage with something else” – well, I wouldn’t be so sure about that.

The Washington Post Editorial Board took a harder line than Krugman, weighing in recently with an editorial entitled, “Single-payer health care would have an astonishingly high price tag.” The “astonishing” figure is derived, not from a dispassioned analysis of all health plans, but from a single, hihgly controversial analysis of a single plan. The Urban Institute reviewed Bernie Sanders’ single-payer proposal in 2016 and concluded that it would increase government spending by $32 trillion over ten years. Single-payer opponents have been citing that figure ever since.

But that figure is “ridiculous,” according to Steffie Woolhandler and David Himmelstein of the City University of New York School of Public Health and Harvard Medical School. In a detailed rebuttal, they note that the Urban Institute’s findings “project outlandish increases in the utilization of medical care, ignore vast savings under single-payer reform, and ignore the extensive and well-documented experience with single-payer systems in other nations - which all spend far less per person on health care than we do.”

The Post’s editors insist that “the public piece of the American health-care system has not proven itself to be particularly cost-efficient,” but this is misleading at best. Medicare, our country’s only nationally-run health system, has much lower overhead costs and inflation rates than private-sector health care. You could even say they’re “astonishingly” lower:

It’s true that our government’s healthcare programs are costlier than their European equivalents. But what the Post’s editors fail to mention is that private profit-seeking is largely responsible for the additional cost. Medicare is forced to share the road with private-sector insurers who can drive rates up, especially when for-profit corporations are increasingly driving every aspect of treatment from hospital care to provider practice management. A single-payer health system could set rates and design treatment guidelines that are based on best practices and are subject to public debate, unlike private plans.

A Change is Gonna Come

The transition to a single-payer system will be complex, but despite what the no-can-doers say, it is achievable. None of the obstacles that are cited are insurmountable.

One-third of our health economy is already managed through government programs. Our best minds should be tackling the challenge of reforming the remaining two-thirds. We have already have built some of the infrastructure and expertise we will need.

Medicare For All is not only achievable. It's inevitable. Health care costs are already too high for most Americans, even those with "good" insurance . The demand for a better-run public system will only grow in the years to come.

It's easy to understand why the Washington Post, with its history of hostility to social spending, would oppose Medicare For All./ But why is there such entrenched opposition among some liberals? Some Democrats want to defend the Affordable Care Act out of loyalty, because it’s a Democratic program.

Some people have developed deep expertise in the current, flawed system. Consciously or unconsciously, they will be inclined to resist changes that render their knowledge obsolete. Other people want to be proven right about politics, and they’ve staked their reputation on claiming that single-payer is a “hard sell” because it will raise taxes.

Actually, it’s an easy sell: I can save you thousands of dollars a year by replacing a terrible system with a much better one. People say Medicare For All is “politically unfeasible.” But the past ten years have taught us that it’s politically unfeasible to aim for anything less.

Many single-payer advocates are also defending the ACA today for a very simple reason: people will die if it’s repealed. But people are dying right now because we don’t have a national health care system.

The best way to defend the ACA is the way Bernie Sanders is doing it. Sanders is barnstorming the country condemning Republican plans to gut the law, a move that would cause tens of thousands of needless deaths to give millionaires and billionaires a tax cut. But he is also making it clear that the ultimate goal – the goal that reflects both the public’s needs and our shared progressive values – is Medicare For All.

Until we achieve health care for all, it's our health itself that is in jeopardy.