The White House has sent formal notice to Congress that it is initiating the process to renegotiate the North American Free Trade Agreement (NAFTA). All evidence suggests that despite Trump’s claims to the contrary, this puts us on track to yet another corporate trade deal that will protect the profits of multinational corporations at the expense of workers and the environment around the world.

Even so, progressives now have a historic opportunity to rewrite the rules of global trade to put people and the planet first. Above all, we must end the corporate court system “free trade” relies on, which tilts the playing field in favor of multinational capital, and replace it will strong standards that protect workers and the environment, backed by enforcement mechanisms with real teeth. 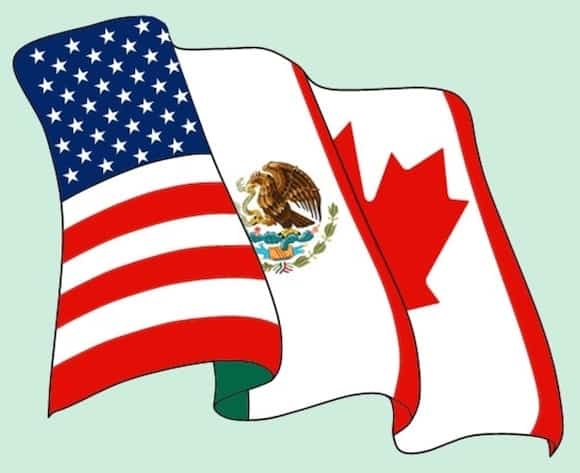 NAFTA and other “free trade” deals came into existence as part of an agenda to remake the world according to the interests of global capital. The result has been a system of corporate globalization that relies on high levels of inequality between countries and a global race to the bottom in wages, labor protections, corporate taxes, and environmental regulations.

In the United States, the results have included deindustrialization and wage stagnation. In Mexico, wages have dropped since NAFTA was enacted and have not recovered, while two million small farmers lost their livelihoods and their land as cheap U.S. corn flooded into the market.

One of the most outrageous mechanisms in NAFTA and other trade deals is the Investor State Dispute Settlement (ISDS), a corporate court system through which a corporation can sue a government for laws that allegedly harm that corporation’s profitability. These cases are decided by a tribunal of corporate lawyers.

Most recently, TransCanada Corporation demanded $15 billion in compensation from the U.S. government through ISDS following the historic victory of the movement to stop the Keystone XL pipeline. This is a violation of democracy and a systematic threat to the common good.

Past trade deals have also included language about the protection of labor rights and the environmental. But these are insufficient and lack real enforcement mechanisms. Through ISDS, governments can be forced to pay out tens of billions of dollars for refusing to allow a corporation to pollute in its territory. There is no equivalent system to hold corporations accountable for their misbehavior.

How to Make Free Trade Fair

Any renegotiation of NAFTA must include the abolition of ISDS. In its place, we must have a set of standards protecting workers, the environment, and the common good. These should include wage standards for all countries in the agreement, setting a precedent for a global minimum wage system, basic labor rights, corporate tax standards, and environmental standards including carbon emissions.

And it is not good enough for these standards to merely exist on paper. They must be backed up by real enforcement mechanisms, with the power of the ISDS but unafraid of corporate power, designed to allow governments and civil society groups to win significant penalties against multinational corporations which violate standards in any country.

Now is the time to transform the rules of the global economy. In response to a new wave of opposition to corporate globalization from both the left and the far right, especially around ISDS, global elites have realized that the system needs to change and have started to talk about reforms. Of course these proposals stem from their own interests, and are inadequate to address the real concerns of working people. Even so, this is a sign that decades of promises that “free trade” will improve the economy for everyone have stopped working.

The rejection of corporate globalization was a major factor behind Trump’s election victory. As I argued last November after Trump’s election scuttled the TPP, his nationalistic promises on trade would not have represented any form of progress, as they are inextricable from his xenophobia, and based on a misunderstanding of how the global economy works.

Trump now seems to be stepping back from many of his campaign promises on trade. But, in any case, he has helped catalyze a crisis in corporate globalization, and it is up to us to use that crisis to create the progressive change we need both in U.S. and internationally.

These progressive changes will make international trade and investment more just, and help end the global race to the bottom in wages, working conditions, corporate taxes, and environmental regulations. These measures will also reinvigorate the global economy, by increasing demand and stimulating job growth across borders, which will in turn decrease high-risk migration motivated by economic desperation and extreme poverty.