Of Budgets and Beatitudes: The Pope Meets the Donald

Well, that happened. Pope Francis, who has made his mark with proclamations for social and environmental justice and a humble lifestyle, met the president whose life has been marked by self-indulgence, grandiosity, and greed. Their meeting took place as Donald Trump’s administration was releasing a budget that, despite the president’s self-proclaimed faith, makes a mockery of Christian teachings.

Contrary to what some might have expected, the universe did not explode in an antimatter fireball when these two opposites finally came together. Although they exchanged strong words during Trump’s presidential campaign – among other things, the Pope said Trump was “not a Christian” –  the tone of their meeting was civil. Nevertheless, the Pope's dissatisfaction was in plain view. 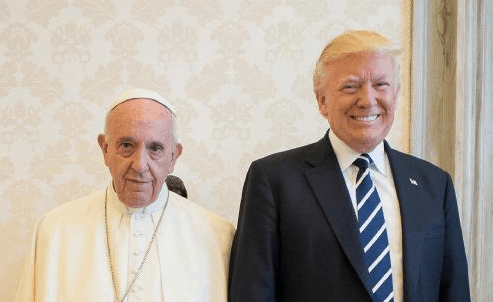 The Pope was polite enough to refrain from quoting Matthew 20:26 in today’s meeting: “Whoever wants to be great among you must first be your servant …”   But Francis did find ways to signal his dissatisfaction, starting with his facial expression. The thought had never crossed my mind until this picture was published: There must be days when even the Pope hates his job.

Then there was this initial exchange, as reported by the press pool:

“… the pope and the president were seated across from each other at the pope's wooden desk. POTUS told the pope 'it's a very great honor.' The pope did not say anything. He did not smile. He looked at pool several times. We were quickly ushered out …”

The Pope’s attitude could most clearly be seen, however, in the gifts he gave Trump: Evangelii gaudium, his condemnation of capitalist economics; Laudato si, his environmental encyclical, and Amoris laetitia, an exhortation on the family that calls upon governments to provide a strong safety net for economically struggling households.

The Pope said this in 2015 in Bolivia: “A just economy must create the conditions for everyone to be able to enjoy a childhood without want, to develop their talents when young, to work with full rights during their active years and to enjoy a dignified retirement as they grow older."

Trump’s budget includes massive cuts to both Medicaid - more than $800 billion - and Social Security ($72 billion), despite his promises not to cut either program. So much for “Thou shalt not lie.”

It’s a rich man’s budget. It was crafted by far-right Republicans like Trump Budget Director Mick Mulvaney Republicans and HHS Secretary Tom Price, although “far-right Republican” is a redundancy in today’s GOP and the predator-oligarchs who seem to comprise the rest of the Trump presidential team.

The budget is entitled, “A New Foundation for American Greatness.” The White House budget promises extraordinary economic growth, something Trump thinks will happen as “we unleash the power of private sector job creation.”

Francis nailed that kind of thinking in Evangelii gaudium when he wrote:

"This opinion, which has never been confirmed by the facts, expresses a crude and naïve trust in the goodness of those wielding economic power and in the sacralized workings of the prevailing economic system. Meanwhile, the excluded are still waiting."

The Pope wrote this in Laudato Si:

"A true ecological approach always becomes a social approach; it must integrate questions of justice in debates on the environment, so as to hear both the cry of the earth and the cry of the poor."

Trump hears neither. The cry of the earth? Trump denies the reality of climate change. He chose Exxon Mobil CEO Rex Tillerson to be Secretary of State. Under Tillerson’s leadership, Exxon Mobil funded both anti-environmental political candidates and climate denial organizations.  Trump appointed climate denier Scott Pruitt, a longtime opponent of the Environmental Protection Agency, to run that organization.

Trump is gutting environmental regulations, he says, to “make American wealthy again.” The Pope said this in Bolivia:

The cry of the poor? Referring to poverty assistance and other government programs, Budget Director Mulvaney wrote this week that “taking money from someone without an intention to pay it back” is “theft” and “larceny.”

Pope Francis doesn’t agree. "Working for a just distribution of the fruits of the earth and human labor is not mere philanthropy," he said in Bolivia. "It is a moral obligation."

The two men did find some points of agreement, according to reports:  on religious freedom, the persecution of Middle Eastern Christians, and “in favor of life,” which presumably refers to restrictions on a woman’s right to choose. On other issues, however, the Pope remains resolutely progressive while Trump, once an iconoclast by Republican standards, has increasingly become a standard-issue corporate conservative.

As Trump’s administration defends his Muslim ban in court, another comment from the pontiff, made during last year’s election, is worth remembering: “A person who thinks only about building walls, wherever they may be, and not building bridges, is not Christian.”

Policy, not theology, should guide a secular democracy, but Trump describes himself as a Christian. Unfortunately, like many conservatives, he doesn’t govern like one.  If he wants a refresher course, he can start with the eight blessings known as the Beatitudes. They include, “Blessed are the meek: for they will inherit the earth.“

As for the Pope: If Francis is ever going to achieve sainthood, church investigators will have to ascribe three miracles to him. Getting Trump to read a book might be one; getting him to read the books Francis gave him could be the second. And getting him to adopt the policies those books so eloquently espouse … well, some things are hard to imagine, even for supernatural forces.

But then, that’s probably why they’re called “miracles.”