The best moment for the new Trump administration was the one where the president smiled in Saudi Arabia and said only 26 words in public. This was terrible reality TV, but we all watched knowing that it was likely just a pause. Something outrageous must be coming up next.

Meanwhile, beyond the distraction, Republicans work to dismantle the most successful government health insurance for the poor, Medicaid. 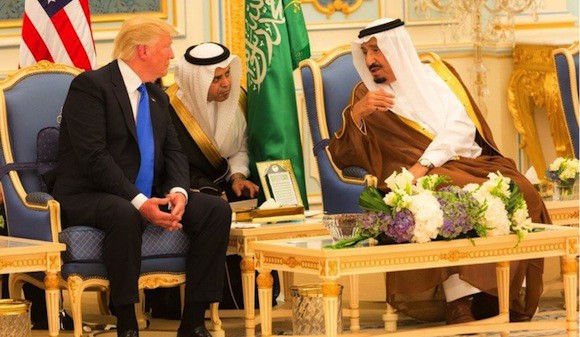 Reality TV works for one simple reason: The antics of the characters are beyond what’s believable in fiction. It’s compelling drama because normal people do not do such things. So part of watching is to find out when the story arc ends, to discover when the situation becomes “normal” again. Even though the story does go on and on and on.

That’s why the presidency of Donald J. Trump would make a terrible novel or screenplay: There’s no mechanism to suspend disbelief. Tell the story about a four-month term in the White House, a time marked by so much chaos, unprofessionalism, and distraction, and a reader (and especially an editor or producer) would shake their head and say, “Try again. This story is not believable.”

That’s why only the metaphor of reality TV works. America the unbelievable. The White House Reality Show is entertaining.

Meanwhile, more important stories are still being written and played off-screen. That’s why our focus must return to the policy fights ahead: How this country (and our planet) deal with climate change, how we stop the rigging of elections, and, how we make certain the court system is fair. Next week the White House will formally send Congress its budget plan for the next year. We already know this plan will be nonsense. Another distraction. The real work of budgeting will occur in Congress and it will require votes from both Democrats and Republicans to make it so.

At a House hearing last week, for example, Rep. Tom Cole (R-Oklahoma) said he was disappointed in a White House recommendation to cut  $5.8 billion from next year’s funding for the National Institutes of Health. He such a draconian cut would stall so much progress from recent investments.

But while Congress might rewrite the budget in some areas, there are real dangers ahead. I’m obsessed with what this bunch is doing to the funding streams for health care, especially Medicaid.

This is what the Trump Show hides: The House’s American Health Care Act does much more than roll back the Affordable Care Act (or Obamacare as they like to say.) It ends a Medicaid program that works. It’s the single most effective form of “government” insurance that secures health care options for 62.3 million Americans. To add a little perspective here: Medicare — supposedly untouchable in politics — insures 43.3 million seniors.

These are huge numbers.  Medicaid is expensive. And we all pay for this plan. As we should. It’s one of the best things this country does.

So it’s no wonder that Speaker Paul Ryan and Republicans are eager to make this go away (both because it costs so much and because it requires a lot of taxes to pay for this enterprise).

This is an issue where the philosophical divisions run deep. Every Republican wants to spend less federal money on this program. Significantly less. Once you do that, there will be fewer people who participate in this public insurance program. That’s math, not politics. The House plan (according to the Congressional Budget Office) strips $880 billion from Medicaid funding in order to reduce health care taxes on wealthy people by $883 billion. Tit for tat.

Watch this debate closely. Parse every word. The Republicans in the Senate who say they champion Medicaid often only talk about Medicaid expansion. And that’s followed by, there should be a transition to something else (namely, block grants that states cannot afford). What else? How does that work? And who pays? 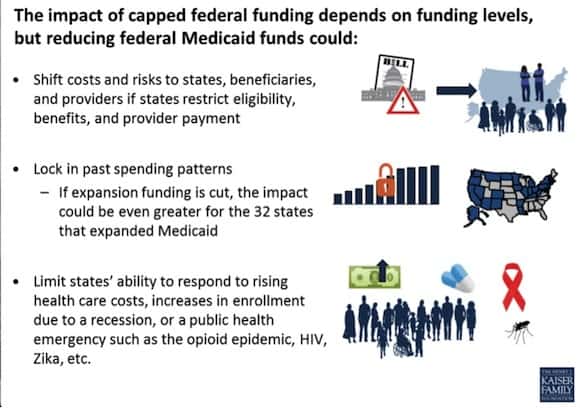 At a town hall in Anchorage last week, Alaska Sen. Dan Sullivan followed this script to the letter. According to The Alaska Dispatch News the Republican senator told a contentious town hall, that he wanted to make sure the people who received health care coverage under Medicaid expansion “do not have the rug pulled out from under them.” Medicaid for now. Then something else. What else? How does that work? And who pays?

The answer is to protect the framework of Medicaid (and if we were smart, enhance and expand it). It’s the one part of Indian health funding that’s growing and already accounts for the insurance of record for more than half of all our children. (And, this is really important, third-party insurance billing, which includes Medicaid, is money that stays at a local IHS clinic or hospital. It does not go into the general budget.)

Medicaid is a partnership between the federal government and the states. So states set many of the rules, federal government then agrees or not, and pays only a portion of the bill. But patients within the Indian Health system are usually eligible for a 100 percent reimbursement.

So states set the rules for Indian Country — including limitations — yet don’t pay the cost. Already six states are already looking to tighten Medicaid rules. Arizona is keen on adding work requirements. Wisconsin wants drug testing (imagine the trap that sets for patients in opioid treatment programs). Maine wants to test assets beyond income. The goal of each new regulation is to shrink the number of people insured by Medicaid.

I’ve heard Republicans say they like the results of Medicaid but that we has a country cannot afford it. That’s particularly troubling because Medicaid is more efficient that private insurance. (Even with its convoluted payments from the federal government to states and Indian health programs). How can that be? Julia Paradise, associate director of the Program on Medicaid and the Uninsured for the Kaiser Family Foundation, says Medicaid acts as a “high risk pool.”

Because so many people are excluded (or out-priced) from private insurance Medicaid is the only option. “Among adult Medicaid enrollees who are not working, illness or disability is the main reason. By covering many of the poorest and sickest Americans, Medicaid effectively serves as a high-risk pool for the private health insurance market, taking out the highest-cost people, thereby helping to keep private insurance premiums more affordable.”

And, as Paradise notes in the recent report, “10 Things to Know about Medicaid: Setting the Facts Straight,” evidence continues to mount that Medicaid improves health outcomes. This is especially true when it comes to detecting and treating diabetes, mental health programs, and research has found that Medicaid expansions for adults were associated with significant reductions in mortality.

The Senate is now busy rewriting the House’s awful health bill. It will be a different entity, that’s for sure. But will the Senate protect (and if they are smart, enhance and expand) the best basic public health insurance program that we have now? There is no evidence to suggest that. And too many people are watching reality TV to even notice.

Mark Trahant is the Charles R. Johnson Endowed Professor of Journalism at the University of North Dakota. He is an independent journalist and a member of The Shoshone-Bannock Tribes. On Twitter @TrahantReports