They're Talking a Better Game, But Will the Democrats Fight?

In public, leading Democrats blame outside forces like Russia and former FBI Director James Comey for their losses in 2016. But privately, many acknowledge the party needs a new direction.

The Democrats' massive losses at state and congressional levels cannot be blamed on WikiLeaks, Comey or even Trump. Something clearly needs to change, and fast. 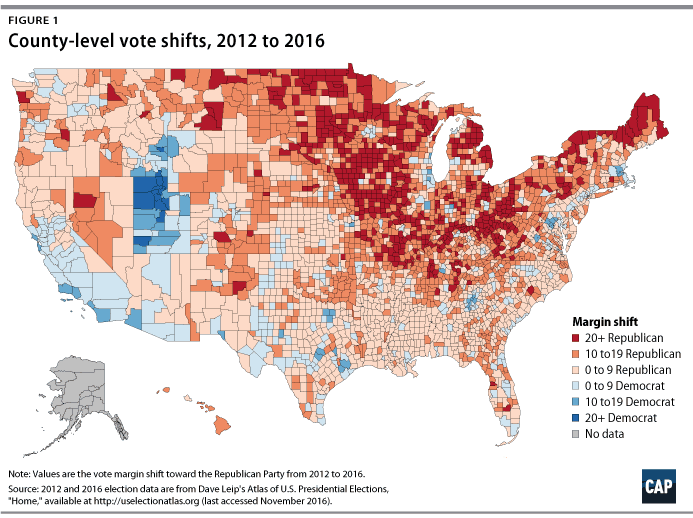 While Democrats embark on a search for bold new ideas, Trump and the Republicans are boldly dismantling large chunks of the government, with massive cuts to assistance programs from Social Security to Medicaid. These cuts will get far worse under Trump's budget for 2018.

This dismantling of our social safety net is a declaration of war against the social contract in this country, and our shared belief that we look out for one another.

The Center for American Progress (CAP), responding in part to the seeming success of the right-wing CPAC gathering, held what it called an “ideas conference” last week. As CAP put it, the gathering brought together “leading elected officials, thought leaders, movement leaders, and others to discuss their ideas to move the country forward and address the needs of all Americans, covering topics from economics to energy, national security to the rise of the Resist movement.”

As The Nation’s George Zornick notes, the conference was held at the “swanky” Four Seasons Hotel in Washington DC’s Georgetown district.  Unlike CPAC, which was ironically more democratic in that it was open to all, attendance at CAP's conference was by invitation only, although $1,000 bought admission to a “Progressive Party” afterwards. 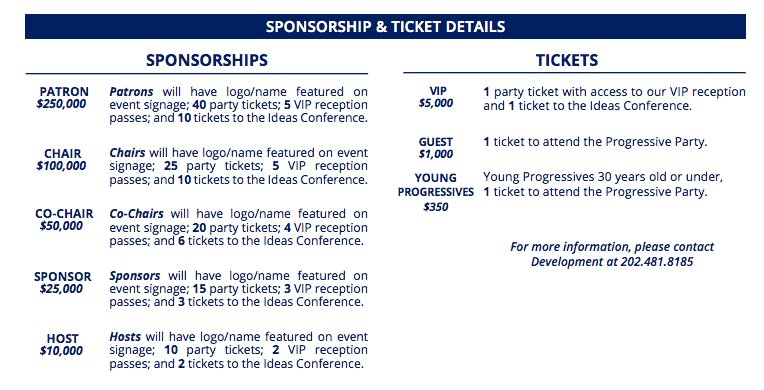 A broad array of speakers paid lip service to progressive ideas, at least in domestic policy. But Trump, not the needs of working Americans, appeared to dominate the proceedings. Also writing in The Nation, Robert Borosage wrote that the conference “was at turns a debate about the future, and a demonstration of the difficulty in talking about a positive agenda when Trump looms over everything.”

While Elizabeth Warren tried to square the circle between anti-Trumpism and a populist agenda, it seemed clear that the Democrats will eventually have to decide: are they merely “resisting” Trump’s alleged Russian ties and personal corruption, or are they willing to identify and fight for a unifying set of pro-worker principles?

Going Bold, With Some Reservations

CAP also issued an economic proposal with the conference. They call it a “Marshall Plan for America,” evoking the U.S. aid program that rebuilt Western Europe after World War II. The centerpiece of CAP's plan is a jobs guarantee, in which the federal government acts as an employer of last resort.

The description of CAP's jobs plan, perhaps out of necessity, dwells more on politics than policy. Approximately one-third of the text, 1543 out of 4658 words, dwells on the proposal’s political context. Its core idea, the jobs guarantee, is expressed in 658 words, roughly one-seventh of the text.

That said, the document's political analysis is essentially sound. It reflects the understanding that Democrats cannot consistently win elections without addressing the plight of the country's dying middle class. It rightly emphasizes the continuity between the needs of the white working class and working people of color.

For CAP, widely seen as the think tank of the Democrats' Clinton wing, to put forth this progressive proposal suggests that Party establishment is willing to embrace bolder ideas than in the past. That’s a welcome development. But the jobs proposal, like the conference, suffers from the same ambiguity of purpose that has plagued the Democrats for decades.

The jobs guarantee is an ambitious idea that has circulated around the Left for some time. But CAP waters down its ambition when they say their guarantee “would not compete with existing private-sector employment.” 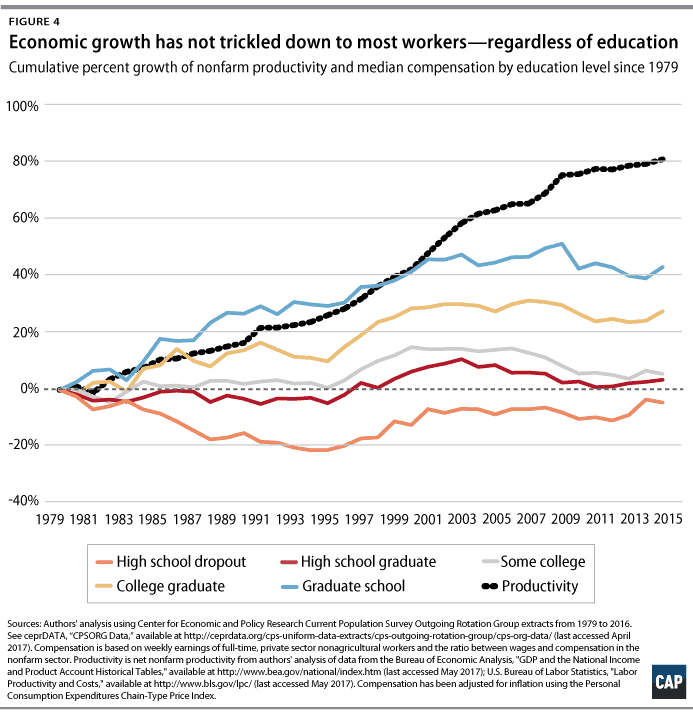 As with so many Democratic proposals, CAP's desire to placate business interests takes a good idea and makes it overly complex and unmanageable. Matt Bruenig and David Dayen explore this point in further detail.

Tellingly, the proposal also downplays the damage done by bad trade deals, both as a substantive issue and as a signifier for the Democratic Party’s co-opting by corporate interests. Those deals were embraced by Democratic leaders that included Bill Clinton, Barack Obama, and at least at times, Hillary Clinton.

A clear-eyed analysis of this issue would emphasize the need for a clean break from the party’s support for corporate-friendly trade deals. NAFTA alone resulted in the loss of more than a million manufacturing jobs in the U.S. These agreements have accelerated inequality and surrendered too much public power to corporate pseudo-courts that overwhelmingly rule in favor of giant corporations.

Keeping the World Safe From... Whom, Exactly?

And what about that comparison to the Marshall Plan? CAP's authors may have revealed more than they intended when they wrote that the post-World War II economic initiative “was not only in the interest of Europe but also of America … (as the) global leader against the spread of communism.”

Who are the “communists” in today's Marshall Plan scenario? Donald Trump and his far-right hordes, or Bernie Sanders and the populist Left?

Sanders was not invited to this Democratic “Ideas” conference – a highly conspicuous omission – and CAP failed to offer a plausible explanation for his absence. And in what was almost certainly not a coincidence, Politico ran an article on the day of the conference filled with both sourced and anonymous anti-Bernie quotes from insider Democrats and their most prominent fan in the blogging world.

Strange. If Democrats want to embrace what a CAP executive called “new, fresh, bold, provocative ideas,” a 2020 Sanders candidacy would be a welcome opportunity to explore and debate them. Is the party really ready to change, or are these ideas meant to blunt and placate the forces fighting for economic change?

Instead, these efforts leave the impression of a party that will be just as bold as it needs to be to regain power, but no bolder – especially if boldness involves inconveniencing the corporate backers who fund both its establishment candidates and friendly think tanks.

That’s not likely to work out well. Martial metaphors are overused in our culture, but there’s no better way to say it: there’s a war on. Republicans are conducting an assault on the very notion of national community, and on the idea that government is an expression of our shared ideals and our desire to help one another.

It’s good to see the Democratic establishment exploring new ideas, but its efforts lack urgency. Perhaps this is one reason why: “They charge $1,000 per ticket to attend their ‘Progressive Party,” an unnamed Sanders-friendly activist told Zornick, “and eat canapes while wondering why they are out of touch with the rest of the country.”

Democrats will eventually need to follow the lead of activists and outsiders, including Bernie Sanders, in taking on the billionaires and corporate interests that have suborned democracy and hijacked the economy. Some vested interests will, of necessity, be offended.

New ideas are best developed and fought for without the constraints of big-donor money. Democrats will need to find and embrace values -- not just because they are politically expedient, but because they are right.

While the Democrats’ current leadership prides itself on its skills of compromise, Trump and his party are conducting a scorched-earth assault on the body politic and government itself. You can’t fight that with focus-group-tested policies.

Democrats will have to choose between the grassroots power of Sanders-like politics and the alluring appeal of major contributors’ cash, which makes life in the short term easier but makes fighting the war for good government so much harder.

We do need a Marshall Plan for American workers. But the Allies had to defeat Germany before the first Marshall Plan could be implemented. Although it may make some conflict-avoidant Democrats uncomfortable to admit it, they – and all of us – have a war to win.