When Protests Are Powerful, The Powerful Punish Protest

When people feel powerless - locked out of decision-making, bypassed by real governance - they turn to protest. Especially for the disenfranchised and oppressed, protest is often the only way to exert power and affect policies and practices that impact their lives and communities. 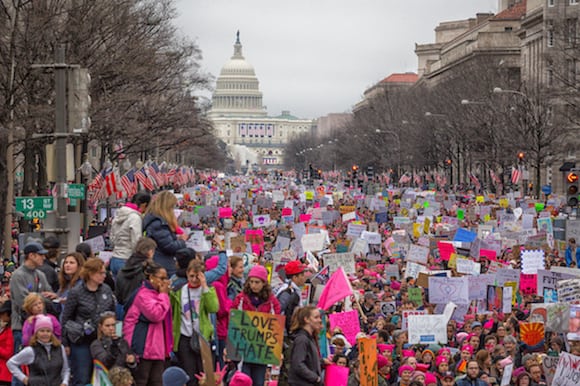 With Donald Trump in the White House and the Republican Party in control of both houses of Congress and a majority of statehouses around the country, protest is now a key avenue of resistance.

We can’t expect an agenda that puts people and planet first to come from above, so people are taking to the streets. The first hundred days of the new administration have been marked as much by protest as by Trump’s demagoguery and appeals to hate and fear.

So it is no wonder that there is a new wave of anti-protest laws being implemented across the country. When protests are powerful, the powerful punish protest.

On May 9, Oklahoma Governor Mary Fallin signed a bill into law that increases fines for civil disobedience, and seeks to punish “conspirator” organizations. The ordinance, HB 2128, targets protests that disrupt “critical infrastructure” with felony charges and a minimum of $10,000 fine. There are further fines of up to $100,000 and up to ten years in jail for those found damaging facilities. Organizations that “compensate” such protests could face up to $1 million in fines.

Public Radio Tulsa reported part of the debate in the Oklahoma House:

Rep. Mark McBride faced a barrage of questions from Democrats, including Rep. Cory Williams, who asked what constitutes "compensation" under HB2128.

"It means just what we want it to on this bill. How about that?" McBride said.

"I'm sorry, what?" Williams said. "Is it a check? Is it money? Is it staying at somebody's house? Is it some other benefit conferred?"

"That would be for the courts to decide," McBride said.

"All due respect, we're supposed to be writing laws. They interpret them. Our laws should have definitions in them," Williams said.

Rep. Collin Walke bristled at a provision saying an arrest — not necessarily a conviction — is enough to create that liability.

In Oklahoma, oil and gas are king. The goal of these measures is clear: dissuade protests against oil, gas and pipeline facilities and interests.

But Oklahoma is just the latest example of an attempt to punish protest. At least 19 U.S. states have introduced measures to curb the right to protest since Donald Trump's election.

In North Carolina, there was a proposal to punish heckling of politicians with five years jail time. In Arizona, legislation was ultimately dropped that would have seized homes and other property from protesters. North Dakota state Rep. Keith Kempenich proposed a bill that would make a driver who hits or kills a protester who is obstructing traffic free from punishment!

“The bills, if enacted into law, would severely infringe upon the exercise of the rights to freedom of expression and freedom of peaceful assembly in ways that are incompatible with US obligations under international human rights law and with First Amendment protections. The trend also threatens to jeopardize one of the United States’ constitutional pillars: free speech.”

Why Does Protest Matter?

One has to wonder why those in power are so worried about protest. Giant mega-corporations have all the money and influence. Corporate allies and henchmen dominate our legislatures and government offices. It would seem they have all the power. So why punish protest - why not just ignore it?

Because protest works. Even in the face of massive wealth and political influence, protest has the ability to change the conversation, to educate the public, change facts on the ground, and mobilize opposition.

When a police officer shot Michael Brown to death in Ferguson, Missouri in August, 2014, spontaneous protests by local Black young people turned what would have been yet another unnoticed police shooting into a national movement declaring "Black Lives Matter."

In 2016, thousands of American Indians gathered near Cannonball, North Dakota through summer heat and bitter winter cold, to stand in prayerful opposition to the Dakota Access Pipeline. The pipeline project ignored the concerns and sovereignty of the Standing Rock Sioux tribe, and bypassed government procedures and environmental regulations. In the end the pipeline went through, but not before winning the hearts and minds of the world and sparking a new upsurge in Native organizing.

On January 21, millions took to the streets of Washington DC and around the world for the Women’s March, setting records for mass protest, one day after the Presidential inauguration. The march galvanized opposition to Trump and reframed his agenda as an affront to the majority of people in the U.S.

Tens of thousands of people have packed town halls and forums across the country to express outrage over GOP plans to gut healthcare for millions. These protests blocked the first attempt to present the bill to repeal healthcare in the House, and derailed the second attempt.

Even though the House passed their "Trumpcare" bill on May 10th, millions are still making their voices heard, and the bill faces massive public opposition as it enters consideration in the Senate.

We are in a new era of protest, and state laws aimed at stopping it are bound to fail.

Corporate apologists, who have bought and sold influence in this country for so long, and their friends in government simply can’t understand there is a kind of power that can’t be bought.

When they see massive turnouts at town halls and in the streets, they imagine it must be paid for, just as they are accustomed to do. But authentic protest is an expression of people’s power - which in the end can’t be stopped with SLAPP suits, fines or “free speech zones.”

During the civil rights movement, thousands of people put their lives and livelihoods on the line to bring about a massive sea change in attitudes. No laws or even violence could turn this tide, once people took hold of protest as their road to change.

We are likely to see more State laws aimed at curbing protest. But we are going to see a lot more protest too. It’s our only option.