House Speaker Paul Ryan, Secretary of Health and Human Services Tom Price and other Republican Party leaders have slithered onto news shows to lie about the repugnant health care repeal passed by the House of Representatives.

They’re lying because, simply put, the facts of this health repeal are morally indefensible. 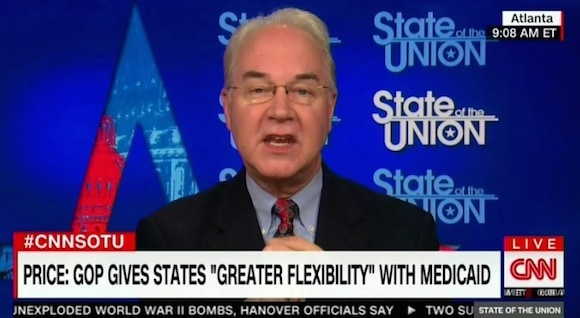 By the latest independent analysis, this legislation will force 14 million people off Medicaid alone by 2026, with 24 million total left uninsured.

Repeal will take money now used to help people pay for private insurance and redirect those dollars to corporations and the rich. And repeal also rolls back federal protections for people with pre-existing conditions.

Even if health repeal dies a deserved death in the Senate, each of these 217 lawmakers decided that scoring a political win for their party – and their donors – matters more to them than protecting the lives of their constituents.

Every one of these elected officials has earned a special spot in our collective memory.

That said, it’s worth picking out a few choice ones for the dishonor they so richly deserve.

When a constituent at a Lewiston town hall asked Labrador why he was “mandating that people on Medicaid accept dying,” Labrador insisted, to the horror of all those watching, “Nobody dies because they don’t have access to health care.”

“It absolutely kills people,” she said. “You don’t know what you’re talking about, and you should sit in ER waiting rooms and explain to people that are going to die [without] insurance.”

If Labrador is ignorant, it’s a willful, inexcusable ignorance that betrays contempt for his fellow Idahoans. One of those Idahoans was Jenny Steinke, who died in 2015 from untreated asthma because state legislators refused to adopt the Medicaid expansion created under the Affordable Care Act. Steinke’s mother-in-law said “her death certificate should read ‘Death by Poverty.’”

Steinke would have died anonymously if her family – and the physician who treated her after her fatal asthma attack – hadn’t made sure her story appeared news around the state. The details are horrifying.

“Several times a week I see people who have delayed medical care because they don’t have coverage, either Medicaid or insurance,” that physician, Ken Krell, told the Post-Register. “They put off being seen until it’s really dire. It’s a very common occurrence.”

So common that Steinke’s family and other Idahoans submitted testimonials to state lawmakers, urging them to pick up the Medicaid expansion that could have saved Steinke’s life.

Labrador could have read those testimonials. Instead, he voted to end the Medicaid expansion in other states and begin starving the entire Medicaid program. Even without the expansion, Medicaid covers more than a quarter of a million Idahoans – and Raul Labrador can’t even pretend to care whether they live or die.

You may have seen the video from early February: a smiling Upstate politician twice embracing his constituent, and twice promising he won’t vote away her health care.

In the video, Andrea Mitchell tells Faso she went to school with his kids. Her school nurse was Faso’s wife. After being diagnosed with a brain tumor and a spinal condition, she was dumped by her insurer. Fortunately, she’s now enrolled in Medicaid and she’s terrified of losing it.

“I need you as a human being to say, ‘I promise that we will not take this away from you,’” Mitchell tells Faso, who leans in for his first hug and promise.

Fast forward to May 4, when Faso betrays those promises. He votes for a bill that will not only raid Medicaid for more than $800 billion, but will also end the program’s fifty-year history of flexible funding. The changes could result in anything from waiting lists to unlimited premiums to shrunken benefit packages or lower eligibility levels for many enrollees.

There are plenty of names we can add to this dishonor roll. They include Rep. Rodney Frelinghuysen from New Jersey, and Rep. Lou Barletta, from Pennsylvania’s eleventh district, who distinguishes himself as the only member of Congress to have sold his health repeal vote for the chance to take a swipe at immigrants.

>But we’ll save them for our next visit to this rogue’s gallery. In the meantime, let’s make sure our lawmakers know that no one who chose to vote for this calamity walks away with clean hands.