Did you pay all of your taxes this April?

Wall Street banks typically pay much less than the official 35 percent corporate tax rate. And yet after attacking Hillary Clinton for her ties to Wall Street, President Donald Trump is pushing reforms that would make it even easier for big banks to rig the tax rules and skip out on paying their fair share. 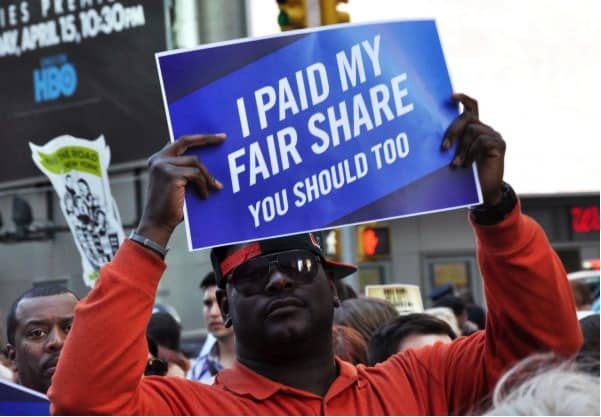 Nine of the largest and most profitable U.S. banks paid an average federal tax rate of only 18.6 percent between 2008 and 2015, according to a new paper co-published by the Institute for Policy Studies and several tax and Wall Street reform groups.

By using various loopholes, these banks avoided paying about $80 billion that could’ve gone towards urgent public needs, like fixing our crumbling infrastructure and expanding pre-K programs.

Under Trump’s plan, tax-dodging banks would pay even less. The official rate would drop to 15 percent, and they’d still benefit from loopholes that would let them pay even lower rates.

One of the biggest loopholes allows U.S. banks and other large corporations to use “creative accounting” to shift profits earned in the United States to foreign nations with low or no corporate taxes. Corporations still owe U.S. taxes on these profits, but they can put off paying them indefinitely.

Wouldn’t it be nice if you could just send Uncle Sam an IOU every year?

Financial firms are particularly good at this offshore tax-dodging game. The six largest U.S. banks (Bank of America, Citigroup, JPMorgan Chase, Goldman Sachs, Morgan Stanley, and Wells Fargo) have set up more than 2,300 subsidiaries in tax havens like Bermuda and the Cayman Islands.

In 2016, they were holding nearly $150 billion in profits offshore. Trump’s tax plan would slash the rate on those offshore profits to just 10 percent, saving the banks an estimated $25 billion. When these tax discounts on offshore profits have been tried in the past, they didn’t help bring back U.S. jobs.

Instead of doling out new tax breaks to Wall Street, lawmakers should be working to make sure these profitable firms pay their fair share. After all, these are the guys who drove our economy off a cliff with their recklessness and greed in 2008. After the crash, taxpayers put them on a path back to profitability with massive bailouts.

Where is all that money going today?

While much of the country continues to struggle with widespread unemployment, losing their homes, and skinny budgets, Wall Street’s high profits are once again driving sky-high pay for executives. At Citigroup, for example, a bank that wouldn’t exist today if it hadn’t been bailed out, CEO Michael Corbat made more than $42 million over the past three years.

One practical way to generate much-needed revenue from Wall Street would be through a tax on short-term speculation. Working families pay sales taxes when they buy essentials like gas and shoes. But when Wall Street traders buy millions of dollars in stocks or derivatives and sell them a split second later, they don’t pay any tax at all.