Imagine a parent who starves his children and fails to do any number of basic parental duties, but then buys one of his kids a healthy meal.

Well, that’s good. Great, really. But it’s not enough. An act of goodness directed at one child cannot feed an entire starving family.

That’s essentially what Trump has done by donating his first paycheck, $78,333, to the National Park Service. 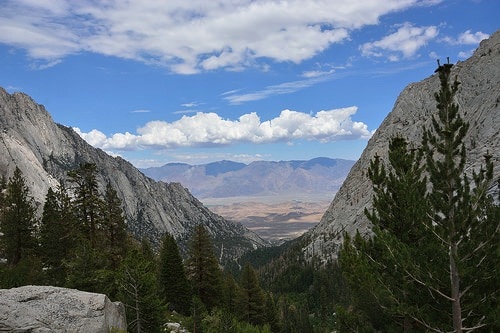 Don’t get me wrong. Our national parks sorely need the money, and I believe this might be the very first thing Trump has ever done that I approve of.

But consider the bigger picture.

The National Park Service is one starving child among many. Trump’s paycheck will go to maintain our nation’s historic battlefields, and they alone are $229 million behind in overdue maintenance.

In other words, Trump’s paycheck covered 0.03 percent of their needs for old battlefields alone. He’ll get some praise and a nice tax rebate for his trouble. Meanwhile, his budget proposal advocates cutting some $1.5 billion from the Interior Department, which houses the National Park Service.

His budget metaphorically starves other government agencies too, and quite literally starves homebound seniors who rely on Meals on Wheels, which he wants to eliminate.

What will go away if these departments are forced to operate on the limited funds allocated by Trump?

Will the Department of Agriculture reduce food stamps to hungry families? Or will it cut conservation programs? Or agricultural research? Which of those would you eliminate if you had to choose?

And here’s the thing: Although the cuts in these departments are large in percentage terms, they’re quite small (by government budget terms) in dollars.

The Environmental Protection Agency’s 31 percent budget cut only saves $2.6 billion. The largest savings come from cuts to Health and Human Services, with a budget reduction of $12.6 billion.

That may sound enormous, but it pales in comparison to the massive $54 billion Trump wants to add to our military, which already spends over $600 billion a year.

Imagine our nation with one-third less environmental protection. What will those cuts mean? What would you sacrifice? Clean air or clean water? Which pollutants are you willing to live with in the environment?

A memo from the Environmental Protection Agency outlines what the cuts will look like. It’s a long list. Say goodbye to the entire program for climate change, programs on indoor air quality, a program on radiation protection, and so on.

Gone with them are jobs. Hundreds of jobs. Didn’t Trump say he was going to be “the greatest jobs president“?

In short, when you hear Trump applauded for donating his salary to the Park Service, be happy. He did a good thing. But then put it in context.

He’s busy dismantling our government as we know it, and his donation is less than a drop in the bucket to make up for what he’s destroying.

Jill Richardson is the author of Recipe for America: Why Our Food System is Broken and What We Can Do to Fix It