For Donald Trump, this has got to hurt: Less than two weeks after his inauguration, the people who took to the streets to protest his policies have outstripped him in popularity.

And, given his rich history of "locker room banter" and other sexist comments, it must be especially humiliating for Trump to know that the biggest mobilizations of protesters who bested him were led by women.

The numbers are irrefutable. Trump's approval rating has sunk to a historically low 42 percent, according to Gallup, yet 60 percent of the public approved of the women's marches, a Washington Post poll found. Only 29 percent of those polled disapproved of the anti-Trump marchers yet 54 percent disapproved of Trump’s performance as president. In an even more startling finding, Public Policy Polling found in late January that 40 percent of voters thought Trump ought to be impeached. 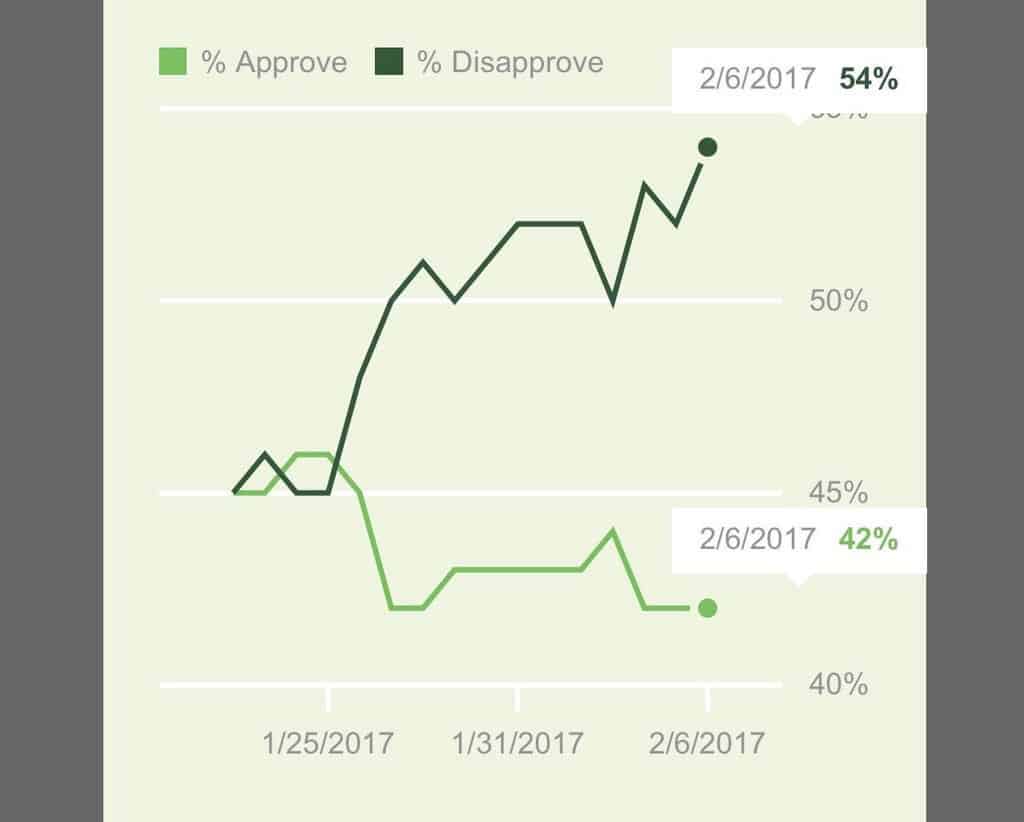 The marchers were also more than twice as popular as the tea party was when it first appeared. Sixty percent of those polled approved of the women's marches in the days following those nationwide events, and 33 percent strongly approved. By contrast, only 27 percent of the public approved of the tea party at the height of its popularity in early 2010, and only 17 percent strongly approved.

That’s especially impressive when you consider the fact that the tea party was very well funded and was heavily promoted by the Fox News media empire. Right-wing rants to the contrary, there was no big money behind the women's marches, not even from George Soros.

Predictably, Trump responded to his humiliating numbers with a tweet dismissing them as “fake news, just like the CNN, ABC, NBC polls in the election.”

He was wrong. Most polls accurately predicted that Hillary Clinton would achieve a relatively narrow but significant popular vote victory. The news failure in the run-up to the election was one of interpretation, not data. The media failed to comprehend the distribution of those votes or the potential shifts in voting patterns that could take place in a few swing states.

With a few notable exceptions like his intentions to spike and renegotiate trade deals and ramp up infrastructure spending, Trump’s policies are as unpopular as he is. Trump is moving to gut the Environmental Protection Agency and he has appointed a climate-change-denying fossil fuel lobbyist named Scott Pruitt to run it. But more than 60 percent of Americans want to see the EPA’s regulatory powers maintained or strengthened. An equal share of us opposes Trump’s plans to increase oil drilling on public lands.

As Trump staffs his Goldman Sachs-rich administration, nearly 60 percent of Americans polled last year believed (correctly) that Wall Street was still a threat to the economy. As he moves to cut bank regulations, it should be noted that 89 percent of Republicans in that poll supported regulating the financial industry. Trump is moving to reduce the power of the Consumer Financial Protection Bureau at a time when 56 percent of those polled want to maintain or increase its authority.

Recent polling by CNN/ORC International also shows that 60 percent of Americans oppose Trump’s plan to build a wall between the United States and Mexico, and 53 percent oppose his plans to halt refugee arrivals and ban immigrants and visitors from seven Muslim-majority nations. Even his Supreme Court nominee, Neil Gorsuch, lags in popularity behind Obama pick Merrick Garland by a seven-point margin, according to Gallup.

Trump has responded to the unpopularity of both his presidency and his ideas by lashing out at improbable targets. After Berkeley officials canceled a presentation by white supremacist provocateur Milo Yiannopoulos, for example, Trump tweeted:

“If U.C. Berkeley does not allow free speech and practices violence on innocent people with a different point of view – NO FEDERAL FUNDS?”

If U.C. Berkeley does not allow free speech and practices violence on innocent people with a different point of view - NO FEDERAL FUNDS?

Yiannopoulos threatened a young transgender student’s safety at another university when he attacked her publicly, and had threatened to do the same with undocumented students at UC Berkeley. His talks have triggered reports of hate speech and right-wing violence at other schools. Nevertheless, the university planned to let him speak until violence erupted. But that wasn’t enough for Trump.

Trump was reportedly also upset about the fact that his White House Press Secretary, Sean Spicer, was portrayed on Saturday Night Live by actress and comedian Melissa McCarthy because she's a woman. Perhaps protesters in the next women’s march should all dress like Trump’s male appointees.

These Trumpian breakdowns highlight his unpredictability and hypersensitivity. But they also demonstrate his ability to manipulate the media, firing up his base while at the same time deflecting attention from his blunders.

What Will the Left Do?

The important question isn’t, “What will Trump do?” It’s, “What will the left do?” Public opinion is against Trump, and with his opponents. But, as the 2016 election showed, anti-Trump revulsion alone doesn’t inspire action. Action arises from optimism, it seems, and optimism arises from a positive agenda for the future.

Despite its weak numbers, the tea party managed to take control of the Republican Party. The GOP now holds more power than it has in many decades. Much of that success can be explained by a corrupted political system, and the billions of dollars invested in that party by corporations and billionaires.

But that’s not the whole story. The tea party also had a story to tell. It was a myth, but it was coherent and clear: The government is the enemy, and we can improve your life by shrinking it.

Meanwhile, Democrats were torn between the Roosevelt legacy and the lure of billionaire cash peddled a mushy blend of focus-group-tested taglines and Horatio Alger myth-making. From “equality of opportunity” to “in it to win it,” their rhetoric was vague and uninspired.

Then came Trump, telling the economic story Democrats should have told: The game is rigged. Wall Street ripped you off. I’ll bring back your jobs. I’ll rebuild our crumbling infrastructure. I’ll protect your Social Security and your Medicare.

The anti-Trump movement stands at a crossroads. It can choose the path of pure opposition, or it can contrast Trump’s dark worldview with a positive vision that forms the basis for a new politics.

“Resistance” has two definitions: One is “resisting, opposing, or withstanding.” Those words suggest a great effort must be made just to stand still against the onslaught.

The other definition is, “the opposition offered by one thing, force, etc., to another.” That suggests something with momentum, pushing in the opposite direction.

In today’s political climate, “opposing” — or worse, merely “withstanding” — isn’t enough. It will take a countervailing force for change to stop Trump and the Republicans.

The early signs are good. Demonstrators protested the immigration-restricting executive order and the Mexican border wall. Furious constituents are letting Republican lawmakers know what they think of their plans to repeal the Affordable Care Act without replacing it. Multi-issue protests, like the women's marches, are emphasizing the ideal of the United States as an inclusive community. They have also pressured Democrats to hold firm against Trump’s most extremist and least qualified appointees.

Trump will undoubtedly go on spinning his apocalypse fables. Doomsday scenarios alone aren’t likely to stop him. Yes, the nation and the world are at risk. But the best chance to defeat Trump is by offering a positive alternative vision for the future, with a movement that fights for the things voters need: jobs, shared prosperity, a livable planet and a government that works for its people.