The post-inauguration wave of protests  is continuing and morphing. Over Super Bowl weekend, some of the biggest took place in Harrisburg, Pennsylvania, Trump's Mar-a-Lago resort  in Palm Beach, Florida and Roseville, California.

Many of these protests are aimed at pressuring lawmakers in addition to expressing disapproval over President Donald Trump's policies. They are becoming more focused and following some of the tactics that proved successful for the tea party. It looks like they may be starting to get results.

In Roseville, California, Tom McClintock was met by a large, "intense" crowd, the Los Angeles Times reports regarding the Republican who represents the Sacramento suburb in the House.

The scene inside and outside Rep. Tom McClintock's town hall meeting Saturday morning was at times raucous, and the California congressman ultimately was escorted out by police. KQED's Katie Orr reported that the 200 seats for the town hall set up by the Republican in Roseville, Calif. were filled, and hundreds more people remained outside. 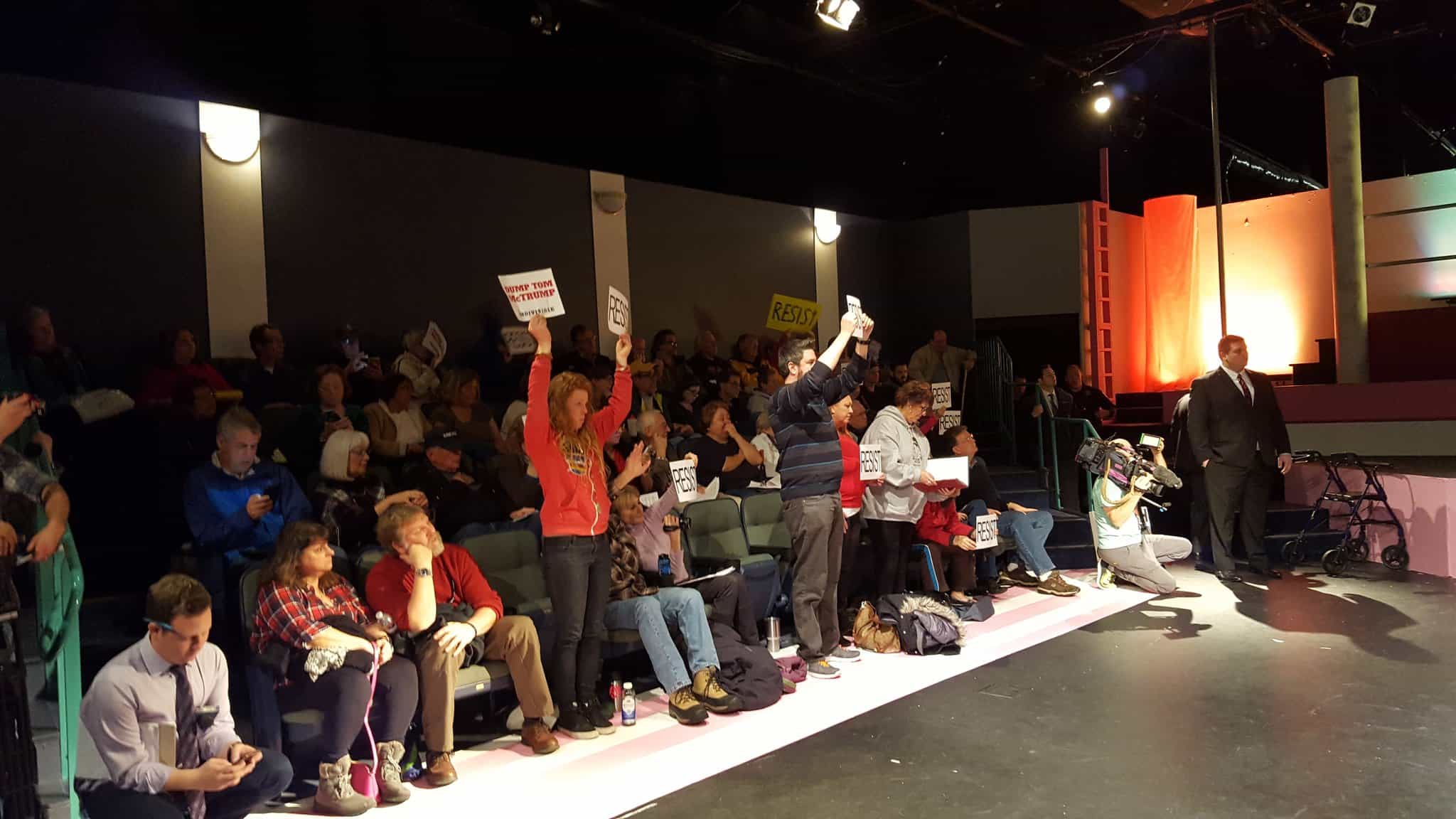 The offices of other House Republicans who represent districts in southern California, like Mimi Walters of Irvine, Darrell Issa of Vista, Dana Rohrabacher of Huntington Beach and Steve Knight of Santa Clarita, are regularly being swarmed with protesters. According to another Los  Times Times article,

About 200 people gathered outside the office of Rep. Mimi Walters (R-Irvine) last week and couldn’t get inside. Walters spokeswoman Abigail Sigler said that the congresswoman was in Washington at the time and that the office doors were locked because members of the group “have repeatedly harassed the congresswoman’s staff,” including on Twitter.

... A similar incident occurred at the office of Rep. Darrell Issa (R-Vista), where protesting constituents complained that staff “barricaded” themselves inside and would not accept letters and petitions.

Roughly 1,000 protesters have begun an Immigration Solidarity Rally on the steps of the state Capitol, to express their opposition to the president's executive order temporarily suspending the nation's refugee program and halting immigration to the U.S. from seven Muslim-majority countries. 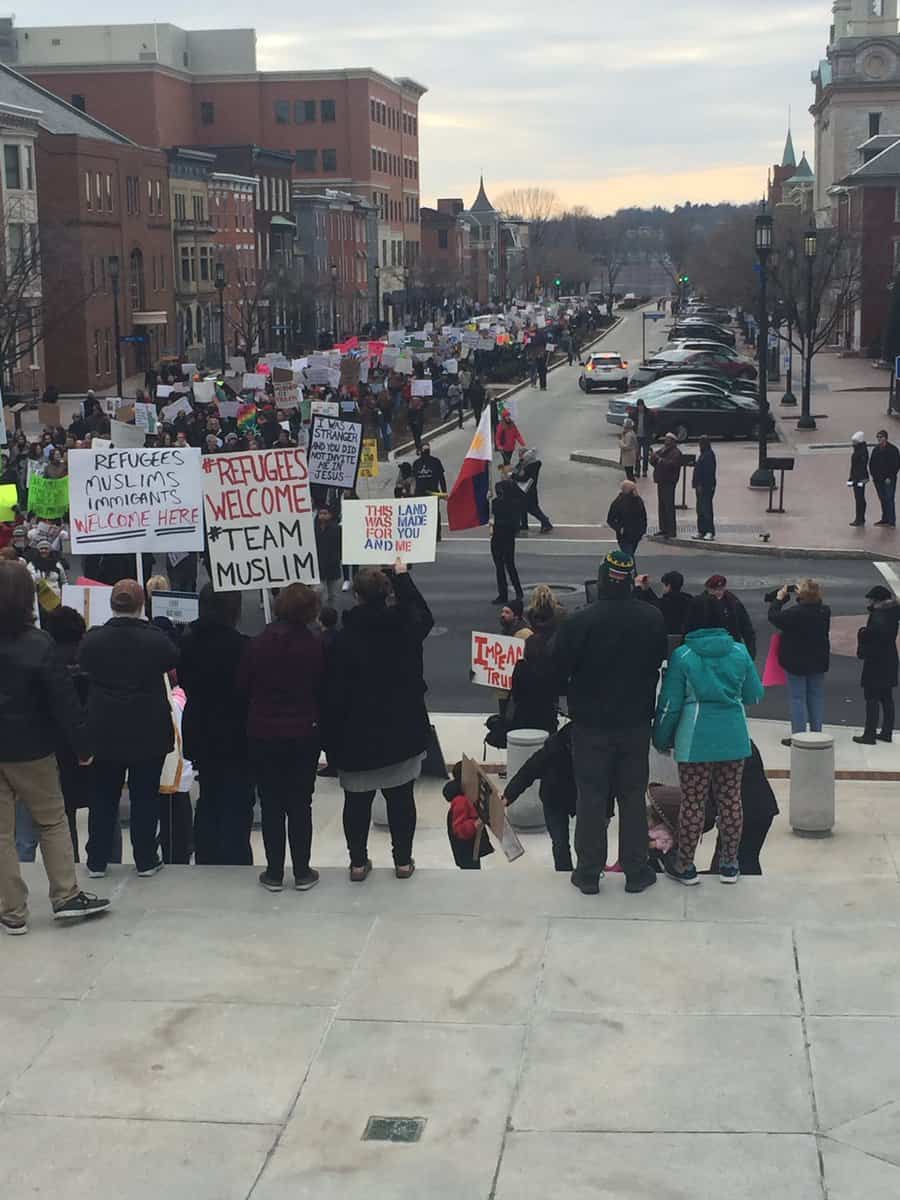 Protesters aren't waiting for town hall meetings tell their lawmakers how they feel — or even for their members of Congress to show up. They are showing up at district offices. The New York Times reports,

For weeks, a swelling group has been showing up every Friday here at the local office of Representative Rodney Frelinghuysen to demand that he hold a town-hall meeting to answer its concerns about his fellow Republicans’ plan to dismantle the Affordable Care Act.

After weeks without an answer, the congressman’s staff replied that he would be too busy, that such gatherings took considerable planning and that just finding a meeting place could be tough.

"These Women Are In My Grille No Matter Where I Go"

“The women are in my grille no matter where I go,” Representative Dave Brat, a Virginia Republican, told an audience last week. “They come up, ‘When is your next town hall?’ And believe me, it’s not to give positive input.”

Trump flew to his Mar-a-Lago resort for the weekend to party and play golf. Thousands of protesters showed up to greet him. The Palm Beach Post covered the story (don't miss the photos),

Chanting “Hey-hey, ho-ho, Donald Trump has got to go,’’ 3,000 protesters marched down Flagler Drive on Saturday in a loud but mostly orderly display of discontent that shattered the usual calm of the city’s south end neighborhoods.

...A police officer stationed in front of the Norton Art Museum estimated at least 3,000 people might’ve participated in the march, which started with a rally at 5 p.m, in front of the Trump Plaza condominiums. Palm Beach Police agreed, tweeting after 10 p.m.: Thank you to all that helped keep the peace. Final stats: estimated 3000 participants, 0 arrests, 1 peaceful night.

A week ago more than 200 Alaskans showed up outside Senator Lisa Murkowski's Anchorage office. That's right, they gathered outside in Anchorage in January. And Murkowski's office received 30,000 calls.

Demanding that Murkowski vote against DeVos, protesters stood outdoors holding signs and chanting, "Stand up for Alaska," "Public funds for public schools," "Lisa, you know better," and "We need educators, not billionaires." Many also stood in a line that snaked inside Peterson Tower on L Street, waiting to take one of the elevators six floors up to Murkowski's office where they wrote down their comments to the Republican senator.

...Murkowski said her offices had received an explosion of calls in the past week, almost entirely about DeVos until Sunday night when calls started to come in about Trump's immigration ban. In total, her staff estimated that about 30,000 calls came into the office over the last week, but it was impossible to break down how many calls came from Alaskans and how many from residents of other states.

The Alaska Dispatch News posted a photo on Twitter,

They got results. John Nichols writes about this in The Nation, in How Alaskan Activists Got a Key Republican Senator to Oppose Betsy DeVos,

Murkowski, who had voted as a Health, Education, Labor, and Pensions Committee member to advance the DeVos nomination, then stunned the Senate by announcing that she would vote “no” when the full Senate considers Trump’s choice.

The Murkowski switch is a testament to the power of the grassroots resistance to Trump and to his cabinet picks.

“I have heard from thousands, truly, thousands of Alaskans who have shared their concerns about Mrs. DeVos,” Murkowski acknowledged, before announcing that “I do not intend to vote on final passage to support Mrs. DeVos.”

Meanwhile Republicans are trying to discredit this mobilization, claiming that all of these protesters are "paid by George Soros" and that the protests are violent.

EMTs forced to perform emergency procedure on patient as anti-Trump protesters blocked an ambulance on its way to a hospital pic.twitter.com/KeWFu5cSr4