More than 700 Momentive Performance Materials chemical plant workers in Waterford, NY have been on strike since November 2. The Albany Times Union explains why, in a report about the striking Waterford chemical plant,

Workers rejected a contract offer that would cut vacation time, reduce 401(k) benefits, increase health insurance costs and slice retiree health insurance and other benefits. The union had approved earlier cuts in pay and benefits in contracts with Momentive in 2010 and 2013, but workers said a third consecutive contract to cut benefits for workers and retirees, some of whom have ongoing health problems linked to years of working with toxic chemicals, is unfair.

Pay cuts, benefit cuts, cutting retiree's pensions... The workers' standard of living has been driven down since the company was bought by a hedge fund in 2006 including complete elimination of healthcare and life insurance for retirees. Some wages have been slashed up to 50% and jobs have been outsourced to intimidate remaining workers.

So they are on strike.

In his inaugural address Friday President Trump said that "the wealth of our middle class has been ripped from their homes and then redistributed all across the world."

One person ripping the wealth from the middle class is Stephen Schwarzman, CEO of the private equity firm Blackstone Group -- and Chair of Trump's new "Strategic and Policy Forum." BloombergPolitics explains,

“This forum brings together CEOs and business leaders who know what it takes to create jobs and drive economic growth,” Trump said in a statement issued by Blackstone. “My administration is committed to drawing on private sector expertise and cutting the government red tape that is holding back our businesses from hiring, innovating, and expanding right here in America.”

Trump's "jobs forum" pick Schwarzman is one of the owners of the Momentive Performance Materials chemical plant where the workers are on strike -- because of the pay cuts and cuts in health care and retiree benefits that is ripping their wealth from them and redistributing it to a few extremely wealthy people at the top.

Outside the Momentive chemical plant, striking workers huddled in the cold around burn barrels have raised a symbol of their corporate owners: An inflatable caricature of a cigar-smoking pig with wads of cash flowing out of its jacket pockets.

But actual ownership of Momentive Performance Materials — sold to a New York City-based hedge fund a decade ago by General Electric Co. — is a corporate web that includes six billionaires on the Forbes magazine list of the nation's 400 richest people, including a man named this month by President-elect Donald Trump as his chief job creation adviser.

Stephen Schwarzman, founder and CEO of the Blackstone Group, will have Trump's ear on economic and tax policy as head of the President's Strategic and Policy Forum, a group of more than a dozen captains of industry, including former GE CEO Jack Welch.

... With an estimated net worth of $11 billion, Schwarzman is ranked 45th richest on the Forbes 400 list for 2016. His New York City-based firm currently holds about $361 billion in assets, making it the largest hedge fund in the world. The 69-year-old has estates in East Hampton, Saint-Tropez in the French Riviera, a beachfront villa in Jamaica, and a luxury Park Avenue apartment in New York City that was once home to John D. Rockefeller.

Will Trump Keep His Promise?

Trump promised that he is going to restore the middle class. But Trump's "jobs" pick is helping destroy the middle class at places like Momentive. From the Albany Times Union report,

"I would pray to God that Donald Trump would reconsider what he is doing and have a talk with some of these people, especially Mr. Schwarzman, about what is going on here in Waterford," said Dominick Patrignani, Local 81359 president. "We are extremely concerned with the loss of jobs, and this guy is supposed to be the new czar of job creation and growth."

Which is it going to be? Jobs and good wages for working people or, as Trump himself put it, ripping the wealth of our middle class from their homes and then redistributing it to a very few billionaires -- like Trump's "jobs" pick?

Whose side will Trump prove to be on? Momentive's workers will tell you that Trump is off to a very bad start at meeting his promise.

Sign this petition to stand with the Momentive workers against Wall Street greed. 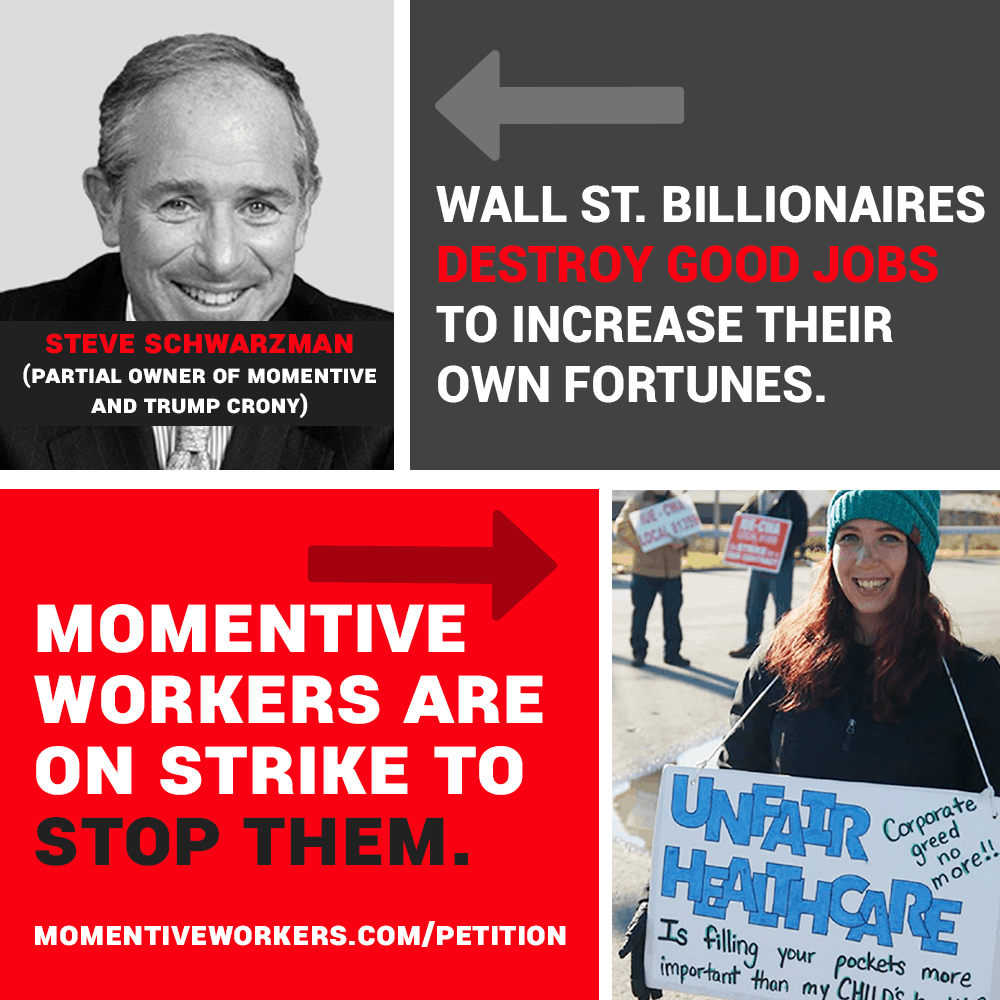