5 Wrong Things Trump Said About Taxes In The Debate

As usual, Donald Trump stretched, distorted and outright denied the truth in the debate Monday night. Some of his biggest whoppers were about taxes: both his own and his plans for everyone else’s. Here are the five most wrong-headed things Trump said about taxes:

Under my plan, I’ll be reducing taxes tremendously, from 35 percent to 15 percent for companies, small and big businesses. That’s going to be a job creator like we haven’t seen since Ronald Reagan. It’s going to be a beautiful thing to watch.

This is the definition of trickle-down economics. Trump claims that by giving big tax cuts to the rich—like himself—the benefits will trickle down to everyone else. This self-benefitting economic philosophy has been proven false time and again. It’s an old canard from conservatives and corporate CEOs.

To be clear: lower tax rates are not associated with stronger long-term economic growth, according to the non-partisan Congressional Research Service. In fact, CRS noted that “during historical periods, slower growth periods have generally been associated with lower, not higher, tax rates.”

This is silly. It’s not “red tape” forcing U.S. corporations to keep their $2.4 trillion in untaxed profits offshore, most of it in tax havens. It’s greed. Corporations owe $700 billion in taxes on these profits; they just don’t want to pay up. They are waiting for Congress to give them another tax holiday, like it did in 2004, when they paid just a fraction of what they owed.

Trump wants to charge these companies a 10% tax rate on their offshore profits when they owe 35% (less any foreign taxes they’ve paid). That would raise just $150 billion—$550 billion less than what these multinational owe. Corporations need to pay more in taxes, not less.

“I don’t mind releasing [my tax returns]—I’m under a routine audit. And it’ll be released. And — as soon as the audit’s finished, it will be released.”

Maybe he thinks that if he repeats the same thing enough, it will be true. But it’s not. The IRS has repeatedly said taxpayers can release whatever information they want about their tax returns, whenever they want. It is simply false to say a taxpayer cannot release his tax returns while being audited. And by Trump’s logic, nothing should prevent him from releasing his returns prior to 2009, which are no longer under audit.

CLINTON: Or maybe he doesn’t want the American people, all of you watching tonight, to know that he’s paid nothing in federal taxes, because the only years that anybody’s ever seen were a couple of years when he had to turn them over to state authorities when he was trying to get a casino license, and they showed he didn’t pay any federal income tax.

TRUMP: That makes me smart. [Interruption] 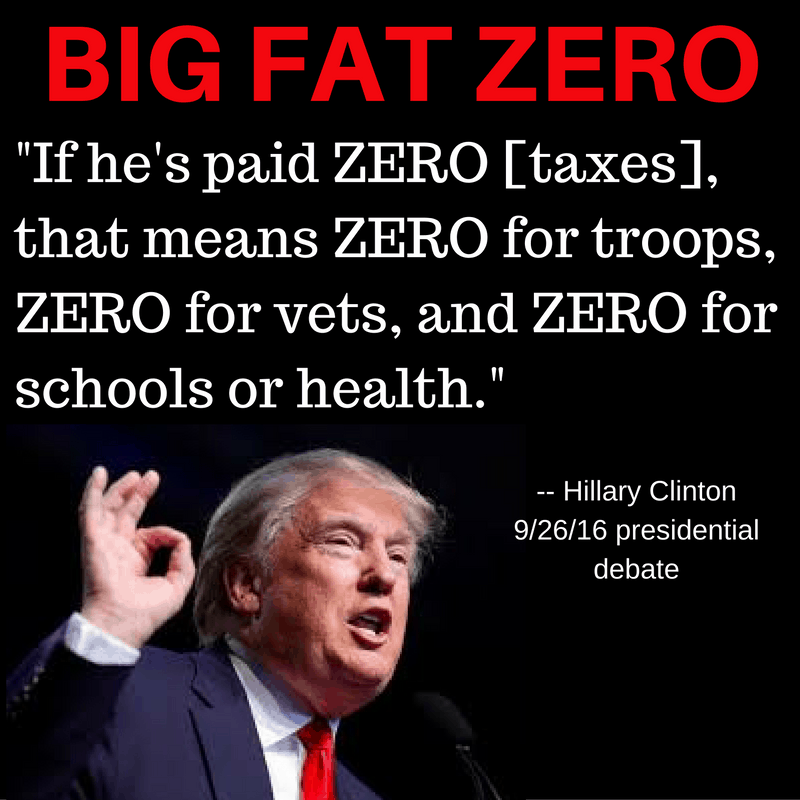 We can’t do any better than Clinton’s response: “So if he’s paid zero, that means zero for troops, zero for vets, zero for schools or health.” Trump has decided it’s up to the rest of us to pay for those things, but not him.

“As far as my tax returns, you don’t learn that much from tax returns. That I can tell you. You learn a lot from financial disclosure. And you should go down and take a look at that.”

Again, simply not true. Tax returns would show not only Trump’s wealth, but give information about his business dealings, how he makes his money, the tax loopholes he takes advantage of, the tax rate he actually pays, and how he would benefit from his own tax proposals.

Tax returns would show where Trump, if elected, would have conflicts of interest in dealing with foreign governments or financial institutions where he owes money. Between questions about his relationship with Russian oligarchs and the $650 million he owes to Wall Street and foreign banks, the American people deserve to know to whom their next potential president owes debts.