These Are Your 28 TPP House Democrat Targets

President Obama is trying to get a vote on the Trans-Pacific Partnership (TPP) during the "lame duck" session of Congress that will take place after the election. We can help stop this by getting enough Democrats on the record as opposing the TPP.

In particular, we need to get the 28 Democrats who – in spite of opposition from most Democrats and hundreds of labor, consumer, LGBT, health, human rights, faith, democracy and other civil organizations – voted for the "fast-track" trade promotion authority (TPA) bill that "greased the skids" for the TPP by setting up rigged rules that will help TPP pass.

Now, along with all of those voters and organizations, Democratic presidential candidate Hillary Clinton and the rest of us need to start working on getting those 28 Democrats to oppose a vote after the election.

Here are the 28 Democrats who voted for fast track. Let's get them on the record before the election about whether they will vote for TPP after the election.

Beyond calls and letters, some people are getting together and doing things like this from Fight For The Future: "Anti-TPP activists are flying a 25 foot blimp outside Representative Ami Bera’s Office protesting his support for unpopular Trans-Pacific Partnership deal." 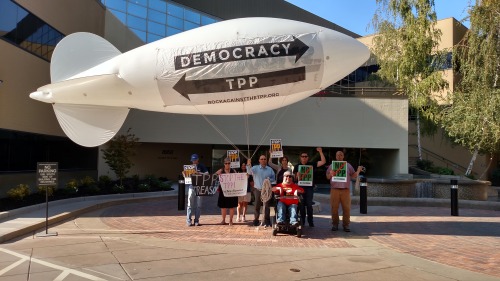 Activists will remain outside the office with the blimp until 11:00am PST, ensuring that it’s visible to Congressional staff as they arrive for work this morning. They will be available for interviews about the action and the TPP.