'No TPP' Gets YUUGE Response At Democratic Convention

If you were watching the Democratic convention Monday night, you might have noticed a lot of "No TPP" signs in the crowd. 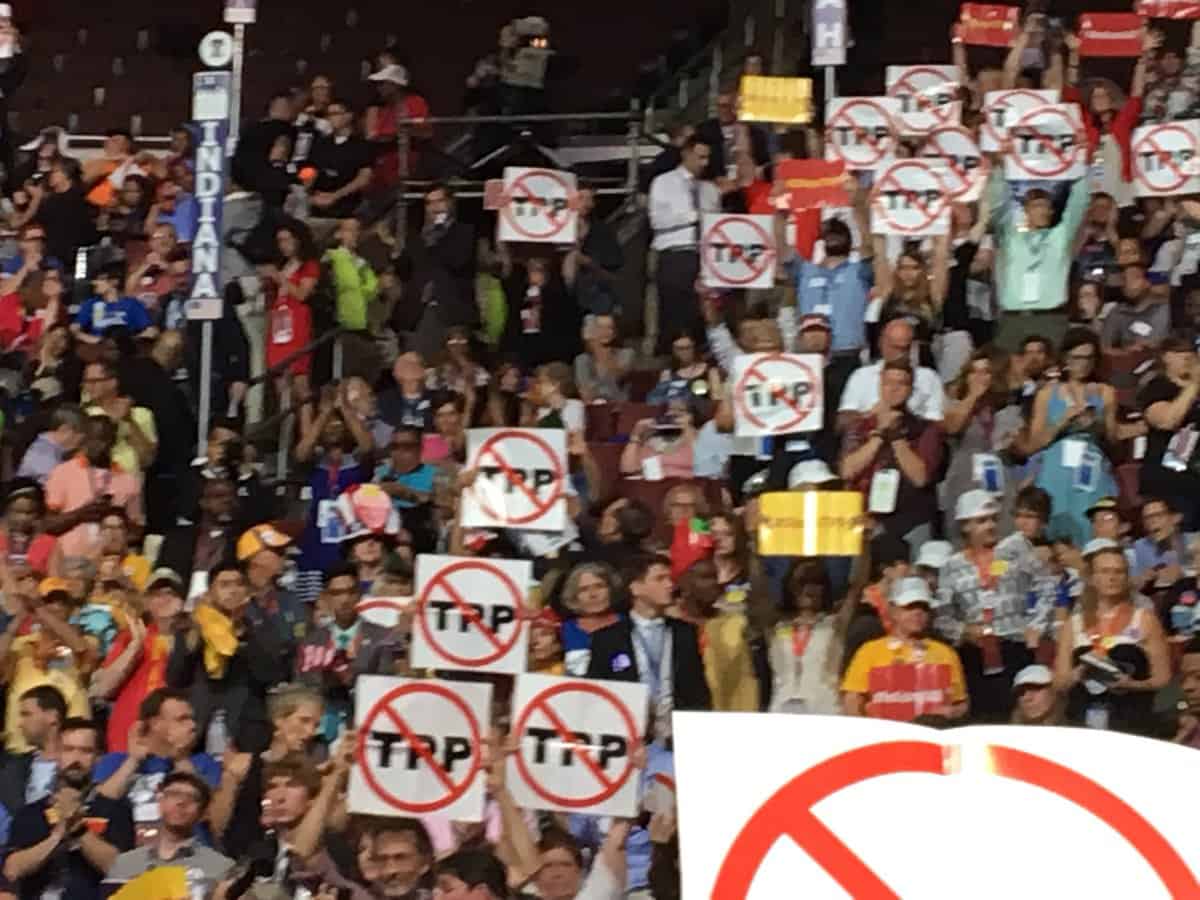 These signs refer to the widespread opposition to the Trans-Pacific Partnership (TPP). They were in evidence when Bernie Sanders took his place at the convention podium as the Monday keynote speaker, on national prime-time TV, facing what was probably his largest audience of the campaign.

Sanders talked in his speech about how his campaign and the Clinton campaign had a "significant coming together" over the content of the platform, saying, "we produced, by far, the most progressive platform in the history of the Democratic Party."

As part of that, he said the platform, "... also calls for strong opposition to job-killing trade agreements like the TPP." This was met with huge – YUUGE – applause, followed by ongoing chanting of "No TPP, No TPP." A source who was in the hall at the time said this received "One of, if not the, loudest response in his speech."

Not Just The Bernie Crowd

Sanders tried to continue with the prepared text, saying, "Our job ..." but was interrupted by continued chanting "No TPP, No TPP." So he threw in an ad-libbed line, not included in the prepared text, saying " ... we have got to make sure that the TPP does not get to the floor of the Congress in the lame duck session." The crowd erupted in cheers and applause. A source who was in the room at the time said the cheers were coming from, "Not just the Bernie crowd, the entire crowd cheered, throughout the whole hall." This clip from C-Span captures the moment.

It's not just "the Bernie crowd" that is opposed to TPP. Hillary Clinton has stated her opposition to TPP. Her vice-presidential pick Tim Kaine has now come out in opposition to TPP. Speaking to Chris Matthews at the convention, Democratic Leader Nancy Pelosi said, "Democrats in the Congress have been overwhelmingly against TPP in its current form."

And no wonder. TPP is a huge "free trade" agreement that is not really about trade. It is a "corporate rights" agreement that elevates the interests of giant corporations over the ability of governments to make decisions they consider to be in their national interests. Under TPP and similar agreements, if a country wants to enact a law or regulation or tariff that impedes a corporation's ability to profit, it is prohibited and the corporation can sue the country in a special "corporate court" consisting of a panel of corporate attorneys. The decision of the corporate court is binding on the country, with no appeal allowed. Labor, environmental, consumer, human rights, LGBT, health care, faith, or other "stakeholder" groups are not given any similar ability to address violations under these agreements – only corporations.

TPP is being pushed by Wall Street, giant multinational corporations, corporate lobbying arms like the Chamber of Commerce and non-Trump parts of the Republican Party, and, unfortunately President Obama.

A recent poll found that many people do not know about TPP, but when presented with arguments from both sides, they come down solidly against it. A lot of people who didn’t know about TPP do now, thanks to Sanders' speech at the convention.