Roger Ailes: How The Russ Meyer of the Newsroom Sped His Own Demise

The ouster Thursday of Fox News chief Roger Ailes, brought on by a long history of sexual harassment, portends big changes for the network he created — and the party it has consumed.

A sexual harassment lawsuit filed against Ailes by former Fox News anchor Gretchen Carlson sprouted a Bill Cosby-esque crop of similar allegations against Ailes. Not long ago, that wouldn’t have been enough to dislodge Ailes as king of the Fox News mountain. But the ejection of Ailes’ old ally Rupert Murdoch from his media throne left Fox News parent company in the hands of a younger generation of Murdochs, who have the future of the network to think about, and no particular love for Ailes. 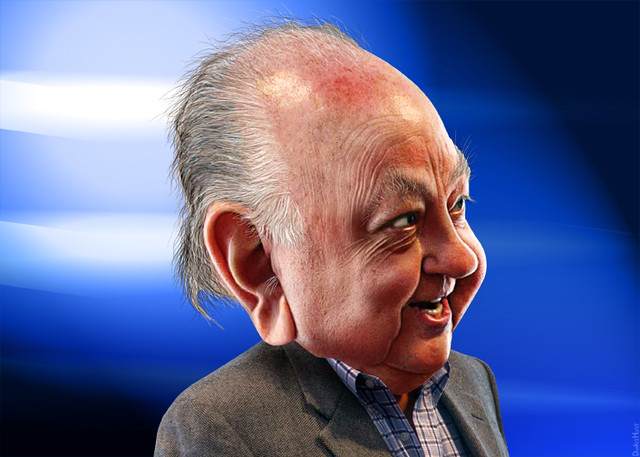 Launched in 1996 as the “fair and balanced” answer to the so-called “liberal media,” Fox News started as a 318-page plot by Ailes and other aides to then president Richard Nixon to get around the “prejudices of news networks,” titled “A Plan For Putting the GOP on TV News.” It became the most successful, most profitable, and least accountable arm of Rupert Murdoch’s media empire. But even as it made household names of people like Bill O’Reilly, Sean Hannity, Megyn Kelly and Glenn Beck, Fox News remained most closely identified with Ailes. “He is Fox News,” said former commentator Jane Hall.

What was for a while the key to Fox News’ success led to its current crisis. It became too much like its chairman, until what ailed Fox News was Ailes himself.

From the moment Fox News launched, the network seemed to objectify its female anchors. Its male anchors don business suits. The women of Fox News are typically young, blonde, leggy, heavily made-up women usually in brightly colored sleeveless dresses, showing a bit of cleavage, with hiked-up skirts, and their legs crossed and visible through glass tables and desks. According to Gabriel Sherman’s biography of Ailes, "The Loudest Voice in the Room," the sexism and misogyny in the Fox newsroom came straight from the top — especially his insistence on displaying his female anchor’s legs on the air. According to Sherman, Ailes was so livid that former Fox News host Catherine Crier wore pants on-air, be barked at the control room, “Tell Catherine I did not spend x-number of dollars on a glass desk for her to wear pant suits.” Carlson herself admitted that “pants were not allowed on Fox & Friends,” when she appeared on Fox host Brian Kilmeade’s radio show.

When Ailes fired Carlson, he didn’t imagine he would soon follow her, any more than he worried that Carlson would share any secrets she knew about what went on behind the scenes at Fox News. When she signed on with Fox News in 2005, Carlson also signed an arbitration agreement stating that “any controversy, claim or dispute arising out of or relating to” Carlson’s employment with Fox News would be “brought before a mutually selected three-member arbitration panel” in New York City. It’s an increasingly common tactic of corporations, to keep employee and consumer grievances from seeing the light of day in court.

Earlier this month, Carlson filed suit not against the Fox News network, but against Ailes himself, alleging that Ailes fired her for repeatedly refusing his sexual advances. The suit claims that Ailes:

● Told Carlson that she would have been more successful at Fox News if she’d had a sexual relationship with him, and that “sometimes problems are easier to solve that way.”
● Called Carlson a “man hater” and “killer” who needed to “get along with the boys,” when she complained about harassment from “Fox & Friends” co-host Steve Doocy.
● Made frequent comments about Carlson’s legs, asked her to turn around so he could see her posterior, and told her that she was “sexy,” but “too much work.”
● “Made it clear to Carlson that he had the power to ”make anything happen for her if she listened to him and understood what he was saying."
● Stymied her advancement at Fox News, despite her successful track record, because of her complaints of sexual harassment and refusal of his sexual advances, telling her at one point, “I’m sure you can do sweet nothings when you want to.”
● Promoted other Fox News hosts who did not complain about sexual harassment or rebuff his sexual advances.

Carlson’s complaints will sound familiar to many women. A survey by Cosmopolitan magazine last year found that one in three women have been sexually harassed at work.

Fox News always had a reputations for egregious on-air sexism.

Viewers even watched Carlson endure sexual harassment from her co-anchors while on the air.

Since she filed suit, more than 20 women are reported to have reached out to Carlson’s attorneys, with their own stories to share about Ailes. Six women spoke to New York magazine. One anonymous former Fox News employee told The Daily Beast, “One time he asked me if I was wearing underwear, and was he going to see something ‘good’.” Another ex-employee said that there was a “conspiracy of silence” over Ailes’ behavior, because "you don’t want to be personally and professionally destroyed. You don’t want to bring Roger Ailes’ wrath down on your head. Kelly Boyle, a former Republican National Committee advisor said Ailes suggested that she have sex with him in 1989, in return for his help advancing her career.

An internal inquiry, sealed Ailes’ fate. The younger Murdochs took the allegations as seriously as their commitment to modern standards for office conduct. Several former and current Fox News employees said conduct like that mentioned in Carlson’s suit were commonplace at Fox News. Conservative commentator and frequent Fox News guest Ann Coulter offered that “every woman who has ever been employed by Fox” has similar stories about Ailes. The network’s most visible star even broke her silence. Megyn Kelly reportedly told investigators that Ailes also sexually harassed her, when she was a young correspondent at Fox.

Under Ailes’ iron-fisted rule, Fox News became a “cesspool” of sexism and sexual harassment. So, it’s poetic justice that Carlson’s sexual harassment suit finally got him fired. That it should happen the same week as what may be Ailes’ crowning achievement — the GOP choosing as its presidential nominee a man so lecherous that he’s publicly objectified his own daughters — is deeply ironic.

Writing On The Wall

Roger Ailes may have fancied himself the Russ Meyer of the newsroom, shaping his female on-air personalities into his favorite physical archetype. Turning Fox News into his playground hastened his demise. Ailes was brought down by his hubris and belief in his own invincibility, but the writing was already on the wall long before Carlson’s lawsuit.

Just over a year ago, Rupert Murdoch stepped down as CEO of Fox News parent company 21st Century Fox, and handed the reins to sons James and Lachlan Murdoch. The mutual hatred long-simmering between Ailes and the younger Murdochs immediately put Ailes’ future in question. Then it was announced that Ailes would report directly to Murdoch’s sons — in what was characterized as a demotion for the Fox News chief, who had hoped a special arrangement would allow him continue to report directly to Rupert Murdoch, as Fox News rushed to report.

The Murdoch brothers had other worries besides Ailes, who ultimately signed a contract ensuring his control of Fox News through 2018. They were, and are, faced with the long-term future of a network dependent on a dying demographic. The Fox News audience is the oldest (and whitest) on television; half of its audience is over 68 years old. And it’s getting smaller, as older viewers die off and younger viewers refuse to tune in. It’s the same problem the Republican Party has, and is aggressively failing to solve, due perhaps in no small part to Fox News’ and Ailes’ influence.

Securing Fox News’ future would have required Ailes’ departure sooner or later. Thanks to Ailes own excesses, the end came much sooner than anyone expected. What Fox News will look like after Ailes departure is anybody’s guess. His ouster represents a potential seismic shift at the network, and potentially in the conservative movement, especially if it’s followed by the aftershock of Donald Trump’s defeat in November.