What Do You Mean 'Sanders Might Be Another George McGovern'?

George McGovern was the Democratic nominee against incumbent Richard Nixon in the 1972 election. He lost in a landslide. Just as the events of the 1980s shaped the current economic environment, the 1970s "Nixonian" politics of division shaped the current political environment. Did Democrats learn the right lessons from that election?

That's the core question being asked as "establishment" Democrats worry that Democratic presidential candidate Bernie Sanders would be "too far to the left" to compete against the Republican nominee in a general election.

McGovern, son of a poor pastor who was a war hero and eventually a U.S. senator for South Dakota, had a reputation as a decent man who sided with the people. He campaigned on ending the Vietnam War, cutting military spending, helping economically distressed Americans and confronting Republican lawbreaking.

He went up against Nixon and the divisive, race-baiting, media-savvy (Roger Ailes!) Republican politics of big money, corruption, lawbreaking, cynicism and manipulation. Nixon used red-baiting, war and race to win working class voters, and corporate money enabled him to outspend McGovern 2-to 1. The Nixon campaign also notoriously used illegal tactics, including such "dirty tricks" as bugging and wiretapping the Democratic Party and McGovern campaign offices.

McGovern lost in a landslide.

What Was "Learned" From McGovern's Defeat?

What lessons were learned from the 1972 campaign?

Republicans learned the lesson that dividing the nation along racial, patriotic and cultural lines, ignoring and blatantly violating laws, manipulating and intimidating the media, manipulating the public with media tricks, making corrupt deals to get corporate/billionaire money, smearing and red-baiting opponents, and generally rigging the voting process wins elections.

"Establishment" Democrats learned the "lesson" that the country is "center-right," and being "too far to the left" by offering government programs that make people's lives better, opposing unnecessary and costly wars on the other side of the planet, challenging Republican lawbreaking, opposing corporate and wealth domination (and especially the military-industrial complex) and opposing racist appeals to white voters loses elections.

The combination of these learned lessons has led to unnecessary and costly wars on the other side of the planet; abandonment of programs that help make people's lives better; corporate domination of the economy, leading to incredible inequality; and a political environment of terrible and cynical division.

These "lessons" are now playing out in the 2016 Democratic primaries as Sanders, the unabashed Democratic socialist who talks of "revolution," competes against Hillary Clinton, the pragmatic candidate backed by the Democratic establishment.

George McGovern was a war hero — a bomber pilot who flew an astonishing 35 missions over occupied Europe, earning the Distinguished Flying Cross. After the war he went to college, eventually received a Ph.D. in history and became a college professor. From 1957-1961 he represented South Dakota in Congress. Then he ran the Food for Peace program for President Kennedy. In 1962 he was elected to the Senate. Then, in 1972 he became the Democratic nominee for president, running against incumbent Richard Nixon.

The 1972 election took place in the midst of national turmoil over the Vietnam War, the struggle for civil rights and Nixon's intentionally divisive politics. Nixon strategist Pat Buchanan had written a 1971 memo titled, "Divide the Democrats," advising that if Republicans can "cut the Democratic Party and country in half; my view is that we would have far the larger half." This was something new to the country, and "Nixonian" Republicans were fully engaged.

McGovern was nominated after a particularly contentious primary season that included the shooting of candidate George Wallace. McGovern was the grassroots candidate with significant opposition from the party "establishment" – especially the Southern Democrats. Hubert Humphrey attacked him as "too radical." An unnamed senator (later revealed as McGovern's first choice as VP Thomas Eagleton) told a columnist, "The people don't know McGovern is for amnesty [for military draft resisters], abortion, and legalization of pot. Once middle America — Catholic middle America, in particular — finds this out, he’s dead."

After that, McGovern became known as the "amnesty, abortion and acid" candidate.

Up against new media techniques pioneered for the Nixon campaign by a team that included Roger Ailes (now head of Fox News), McGovern did not understand media and did not run a media-aware campaign. He did not give his convention acceptance speech until 3 in the morning. Then it was revealed that his VP choice Senator Thomas Eagleton had been hospitalized 20 years earlier for depression. McGovern initially said he was "1,000 percent behind" Eagleton, but later was forced to replace him on the ticket with Sargent Shriver. Thus began a campaign destined for failure.

McGovern campaigned on ending the Vietnam War and restoring domestic tranquility by granting amnesty to draft resisters (an action that President Jimmy Carter managed to take after taking office in 1976). He proposed cutting defense spending by a third over three years. He proposed replacing welfare and other public assistance by guaranteeing every American a minimum income.

In the campaign, McGovern was smeared as a communist and an anti-American, anti-war peacenik because he said the Vietnam War was wrong. He tried to warn the country about the criminal activity going on in the White House. He tried to help people, and was branded as anti-white because it meant helping "those people" who just want handouts, if you know what I mean.

Then, on October 27, just before the 1972 election, Kissinger announced, "Peace is at hand," taking the Vietnam War issue off the table. (The war actually continued until the fall of Saigon on April 30, 1975.) 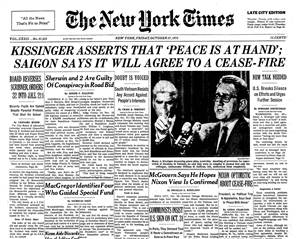 The public did not know at the time that the war could have ended in 1968, but the Nixon campaign had made a deal with the South Vietnamese to scuttle the peace talks in exchange for a better deal after the election. The idea was that an announcement of the end of the war would win the 1968 election for Humphrey. But Nixon instead kept the war going, so that its end could be announced just before the 1972 election.

The public also did not know at the time that the Nixon campaign had been using "dirty tricks" to knock out Democratic primary candidates who were considered to be stronger opponents than McGovern. A 1972 Washington Post report, "FBI Finds Nixon Aides Sabotaged Democrats," by Bob Woodward and Carl Bernstein, explained:

The activities, according to information in FBI and Department of Justice files, were aimed at all the major Democratic presidential contenders and – since 1971 – represented a basic strategy of the Nixon re-election effort.

During their Watergate investigation, federal agents established that hundreds of thousands of dollars in Nixon campaign contributions had been set aside to pay for an extensive undercover campaign aimed at discrediting individual Democratic presidential candidates and disrupting their campaigns.

McGovern, the war hero, was red-baited as unpatriotic for wanting to end the Vietnam War. Republicans said he was "encouraging the enemy" and "cutting into the very security of our country."

The minimum income idea was framed by Republicans as government handouts to black people as part of the party's "Southern strategy" of "positive polarization" to divide the country along racial lines in order to win over white, working class voters. Southern Democrats launched a race-baiting "Democrats for Nixon" effort.

Is Sanders "Another McGovern?"

Is Bernie Sanders "another George McGovern?" What would this mean? Look what has happened to the country since the Democratic Party "learned the lesson" of the 1972 election by capitulating to the politics of Nixon, Reagan and the corporate-funded, media-manipulating, race-baiting, red-baiting Republican strategy of division and responding by moving ever rightward.

Nixon was exposed for what he was and forced to resign. Reagan's Iran/Contra exposed his lawless administration. George H.W. Bush ended his presidency pardoning several people to keep them from testifying against him. The obvious failure of Republican "trickle-down," neoliberal economics has proven itself to be little more than a scam to enrich the already-rich, and transfer power from We the People to a few plutocrats and their giant corporations.

Sanders' mass appeal, big crowds and enthusiasm in spite of a virtual media blackout shows that America has grown up a lot since 1972. Thanks to the Internet, we are able to communicate past media manipulation and organize. Many people are now well aware of how Republicans use racial and other divisions to misdirect and manipulate people from seeing what is being done to us. Even on the right, Donald Trump gains support as he speaks out against trade deals that outsource our jobs and factories, and elites who demand cuts to programs like Social Security.

If Sanders is "another McGovern," maybe that is exactly what the country needs right now.