Why The Vote On Ohio’s Gerrymandering Ban Matters

Ohioans are voting Tuesday on a constitutional amendment to ban gerrymandering that could cure much of what ails our government and fix our broken political process.

Ohio residents are voting on Issue One, which passed the Ohio General Assembly as HJR 12 last year, with overwhelming bipartisan support. The historic ballot measure would amend the state constitution to make it harder for politicians to manipulate state legislative districts for partisan gain.

Ohio’s Issue One would:

● Establish a seven-person bipartisan commission, with at least two members of the minority party.
● Ban partisan gerrymandering, with an explicit prohibition against drawing districts primarily to advantage or disadvantage a political party.
● Require that districts reflect how voters actually voted.
● Place limitations on maps lacking bipartisan support, by shortening the amount of time a map will be in effect if it doesn’t have at least two minority party votes.

In other words, Ohio’s Issue One effectively bans the practice of manipulating the boundaries of a legislative district to favor one party over another, and doing it again when Census data indicates how populations have grown, shrunk, moved and otherwise changed. Political gerrymandering is conducted by a majority party to strengthen or maintain an electoral advantage.

Race can be a factor, too. Districts can be drawn and redrawn to “pack” members of one group into a single district, to allow another group to win the remaining district. Districts can also be cracked to split a voting bloc among several districts to dilute their power, and prevent them from forming a majority in any district. 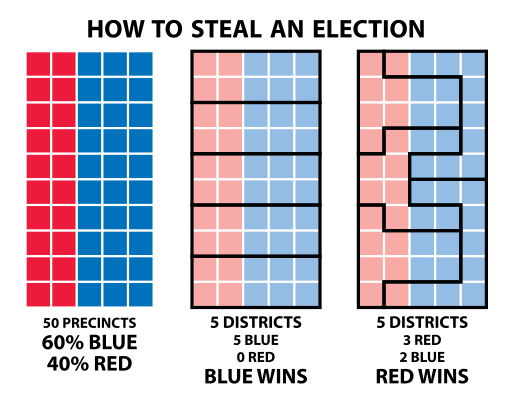 Gerrymandering can also produce legislative bodies that are not representative of the population, and ensure that the party that wins the least votes still ends up with a legislative majority. It happened in the 2012 election, when House Democrats got more votes than House Republicans, but somehow Republicans retained their majority, and even attempted to claim a mandate. It was close, but House Democrats got about 54,301,095 votes, while Republicans got 53,822,442. Put another way, Democrats won the popular vote, and if that were all that decided the make-up of the House, Democrats would have won a majority.

What saved the House GOP’s majority wasn’t the will of the people. More Americans voted for Democrats than voted for Republicans. What saved the GOP’s majority is that American voters all live in districts. How those districts are drawn can consolidate or dilute the power of their votes. Republicans used their control of the redistricting process to pack Democratic voters into a few ever-tighter districts, leaving the rest as “safe” Republican districts, and restructuring races so that the GOP could hold on to its majority even if it loses the popular vote.

As much as its allowed Republicans to hold on to their majority in the House, gerrymandering has also hobbled the GOP’s ability to reach out to ethnic minorities. Demographic trends show that Latino and African American voters will become more important to political parties, as minority vote shares rise and the vote shares of white groups decline.

The consequences play out in Congress, where House Republicans take the economy and American families hostage, play chicken over the debt ceiling, and shut down the government to force through an agenda they couldn’t persuade enough Americans to vote for in the first place.

If Ohio’s Issue One wins, it could point a way out of our current political morass. That it’s on the ballot at all is at least a hopeful sign.